Films constitute as the perfect example in communicating cultural identity, the elements such as character, plot, and script pose as effective tools for communicating the film’s message. Much of this can be attributed to the basic premises of culture and communication as two terms co-related in such a way that cultures will simply cease to exist or continue without communication. Likewise, communication of a certain group of people is only limited to the traits distinct to their cultural pattern.

In recent years, it has doubtlessly been established that the broad context of cultures is a way of identifying a group of people; this is because consciously or unconsciously everyone belongs to a particular sub-culture or microculture which uniquely signifies him or her from the main culture.

Don't use plagiarized sources. Get your custom essay on
“ Cultural Identity in the Film American Gangster ”
Get custom paper
NEW! smart matching with writer

For instance, the American culture is divided in to different microcultures considering that the United States is comprised of a diversity of people. James W. Neuliep (1999) defines microculture as a set of common values, beliefs, and behaviour that defines a group of people.

The aforementioned values, beliefs, and behaviour also integrate shared histories as well as verbal and non-verbal language systems that are similar to, but methodically differing from the dominant cultural norms. The motion picture American Gangster (Directed by Ridley Scott, starring Denzel Washington and Russel Crowe) concurs with the previous statement of how the cinematic tradition communicates cultural identity. This is, in large part, brought about by the fact that the film contains themes and elements which present traits and values reflected by several microcultures such as race, gender, and socio-economic status.

Primarily, American Gangster follows the rise of Frank Lucas as a prominent figure in Harlem’s organized crime and drug trafficking industries. The motion picture is a fictionalized re-telling of how Frank Lucas, following the death of his boss, Bumpy Johnson, gradually monopolized the New York drug trade with marvellous capitalist principles and devised a flawless importation scheme thereby allowing him to sell his good quality merchandise at a more affordable price (Scott, 2007).

However, law graduate/street cop Richie Roberts, who is struggling to fight corruption within the force as well as the entire city while struggling to keep his marital life intact, felt the sudden shift of power in the underground crime domain (Scott, 2007). Combining both street smarts and experience, Roberts conforms to the belief that an unlikely individual is climbing the ladder of success overtaking on the prominent Italian-American crime families in the organized crime scene.

As such Roberts decides to probe the situation closely giving him promising results which co-incidentally became huge turning point of his crime busting career (Scott, 2007). In a first look, the motion picture, American Gangster, appears to be another boring mobster film, however, the film highlights a character that effectively communicates the notable traits of people from a particular or diverse microculture.

Not to be mistaken as a form of stereotyping or prejudice, the character simply mirrors the conventional patterns distinct of the African-American race’s traits and behaviour. Likewise, the character also reflects the conventional lifestyle of wealthy business executives who keep a low profile while running their respective businesses. Blood is thicker than water, so as the saying goes, this is how American Gangster’s Frank Lucas (George Washington) lives his life, both in personal and professional perspectives.

Being an old-fashioned person, Frank Lucas’ actions reflect the traditional norms of African Americans, most particularly of the belief in close family ties. Primarily, most members of Lucas organization are immediate blood relatives. Frank Lucas seems to trust his family in running his business above everyone else. In addition, despite the moral controversy surrounding his source of living, Lucas also constantly pays eternal gratitude as a son by prioritizing his mother and escorting her to church every Sunday and never missing a family affair

At the same time, Lucas also belonged to the upper class social category considering the depicted extravagant lifestyle he lives and his unique ability to manipulate the underground crime and drug scene as well as some officers of the New York Police Department to his advantage, even influencing established crime organizations and overpowering stable crime factions such as the Lucchese Crime Family and the Mafia respectively (Scott, 2007).

Conversely, being the filthy rich drug lord that he is, Lucas is a very passive person in such a way that he refrained from wearing any expensive jewellery and other accessories as much as possible, this is perhaps to keep a low profile and to command attention away from him and his daily operations. . Both Lucas’ race and socio-economic status identify him the most because of how Richie Roberts immediately felt that the sudden change of control over the underground crime scene was brought about by an African-American individual.

His socio-economic status provided Roberts with the evidence that he is a major player in New York’s underground crime scene as the ingenious street cop instantly determined Lucas as an elite crime boss even though his identity was not yet confirmed. Moreover, as Lucas frequently reiterated and practiced throughout the film, he upholds the importance of honesty, integrity, and family in his business and his life (Scott, 2007).

As previously iterated, Lucas rose to prominence as the kingpin of heroin trafficking and marketing in the Harlem area, thus, he experienced a high power distance level for two reasons. First, Lucas’ became so powerful that he had the capacity to bypass notorious crime families such as the Luchesse and the Mafia. Second is that Lucas stayed kingpin for seven years until he gets finally caught in 1975 (Scoot, 1975). However, like all empires in history, Lucas’ drug empire crumbled in due time.

As such, his power distance had a total paradigm shift as he chose to be a police asset in exchange for his freedom (Scott, 2008). Instead of paying his social debt by imprisonment, Lucas embarked on the path of self-redemption by becoming a police informant and helping solve the evasive nature of underground crime and corruption within the force. Frank Lucas being the premiere heroin supplier during the late 60s and the first half of the 70s, lived in a high context microculture, largely due to the fact that most of his leisurely activities reflected the glitz and glamour of high society.

Initially, despite the previous statement that he does not wear expensive accessories, Lucas dresses up in a well fashioned manner. Moreover, Lucas has enough funds to witness headlining events and be seated among the wealthy crime lords during main sports events such as the first bout between Muhammad Ali and Joe Frazier 1971. However, since he kept a low profile, Frank Lucas also chose to live in low context microcultures. One is that he avoided any form of attention and suspicion from authorities during his 7-year tenure as a drug lord.

Second is that although he dresses himself well enough to be distinguished as an individual with above average socio-economic status, he does not manifest any means of revealing his financial stability. As a person, Frank Lucas is both an individualistic and collectivistic. This is, in large part, brought about by the identities he maintains both as a family man and a drug lord. Lucas is individualistic in such a way that he took the bold choice of going to the main source in order to purchase the merchandise himself (Washington, 2007).

Lucas also appears to have little tolerance for failure despite the fact that his own family is part of the business. On the other hand, Frank Lucas also manifests a collectivist attitude by being over generous to his own family members and business associates. As previously mentioned, Lucas prioritizes family even if his business is at stake. First notable thing is that Lucas uses some of the proceeds from his business to purchase a larger and more suitable home for his mother.

Another thing is that Lucas never fails to give provide the main dish for Thanks Giving dinner and although he has temper problems when it comes to failure and excuses, Lucas generally upholds the principles of honesty, integrity, and family. The motion picture American Gangster effectively communicates the cultural patterns of the group where Frank Lucas is categorized during a particular era through the elements and themes integrated within it. Likewise, despite the account that the film is only a fictionalized re-telling of a particular culture, the reality of what truly happened has been extensively established. 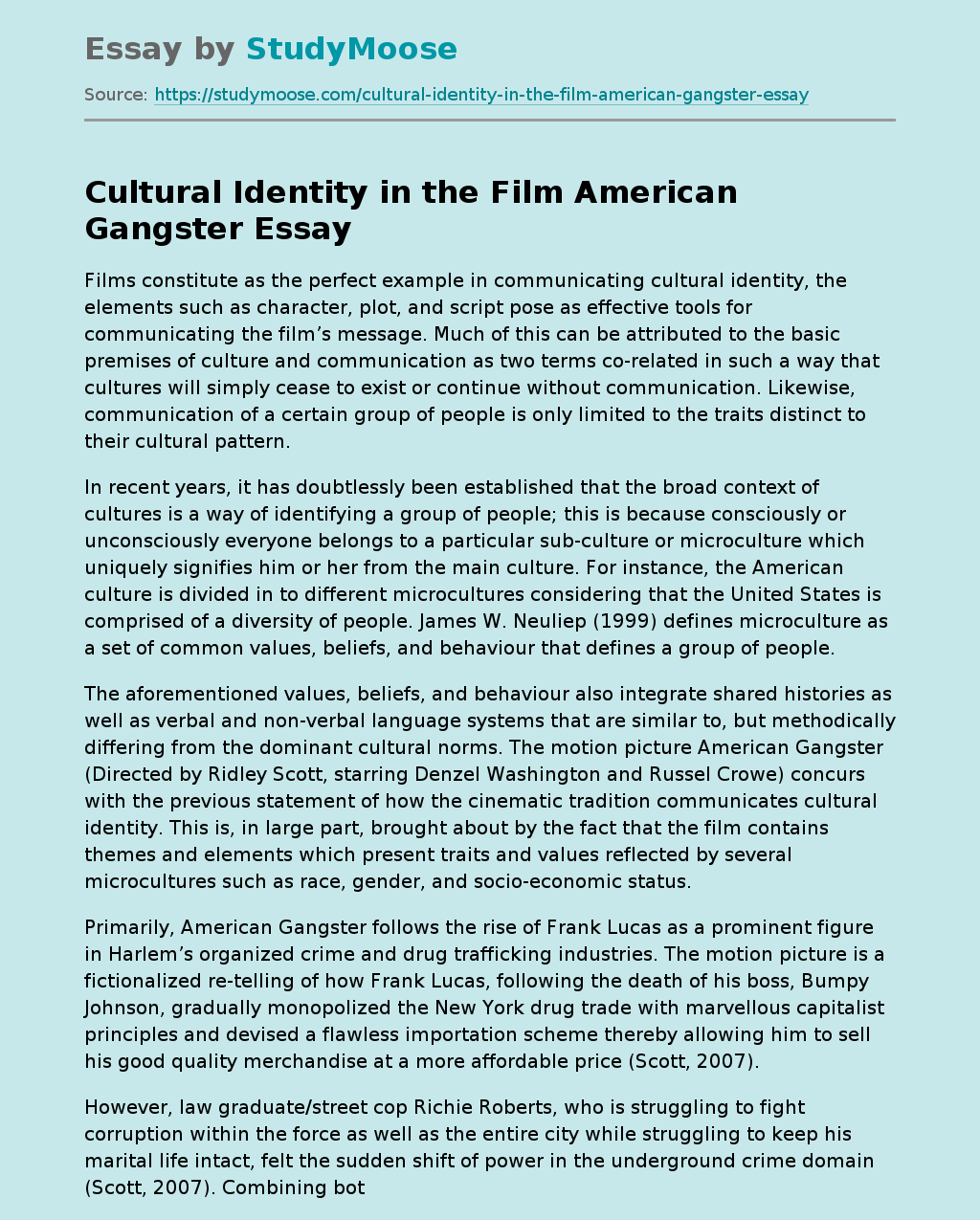