1. The University of Washington seeks to create a community of students richly diverse in cultural backgrounds, experiences, and viewpoints. How would you contribute to this community?-University of Washington, Seattle I, a culturally influenced young woman, have not only one, but two influential ways to contribute to your diverse university.
As a Jewish Caucasian girl, I am here to throw stereotypical beliefs down the drain towards any culture. I am a blonde, blue eyed, 18 year old who not only grew up orthodox, but also has a half Christian family.

Turn in your highest-quality paper
Get a qualified writer to help you with
“ Cultural Diversity College Essay ”
Get high-quality paper
NEW! AI matching with writer

I do not have a dozen brothers and sisters, an abnormally large nose, or for that matter, any money to spare whatsoever. I grew up with married parents, and when divorced, lived with my father. Our family was never “well off” or capable of buying anything and everything. I spent the majority of my life in an apartment living with a single parent. As for all that money society said we had; let’s just say there were times we were lucky to have money for groceries that week.

People expect snotty Asians, Muslims with terrorist intent, uneducated Latinos, and gang associated African Americans. It isn’t easy to read that much less write it. Unfortunately, we know that much of the world is still like this. But I’m writing this to tell you I am not the world. I come from a culturally diverse family whom in the past, have even been at war.

There is my mother’s side, where missing Sunday church was not an option; and my father’s side, the conservative yet non-orthodox classic Jewish background.

Although my mother converted to Orthodox Judaism before my time, her family remained faithful Christians unable to understand her withdraw. I grew up an orthodox Jew, covered from head to toe, eating only what the Old Testament allowed me to. Growing with age, I grew out of my orthodox upbringing, realizing that my draw towards Judaism didn’t come from praying and unreasonable rules, but the Jewish traditions and values I grew up with. While I celebrate Hanukah with my father’s family, I equally enjoy Christmas time with my mother’s family. I get to learn both stories, both views, and the different values contributing to both religions. And during
these annual holidays of rejoice and tradition, I have gained a respect for both. Because of my background, familial influences, and how I chose to embrace my religion, I am capable of respecting others with different views, and even learning from them. When one person is capable of this, I believe it is contagious to other people from different backgrounds. Thus, gaining more worldwide respect, more acceptance, and more closure from taking in various values that many religions, or different views, have to offer.

Because of my culturally influenced upbringing, the opportunity to choose my stance on religion, and my non stereotypical Jewish background, I can contribute to every community. I have respect for other people’s views, encouraging them to have respect for mine and others. I don’t stereotype people based on their culture because I know first-hand this isn’t always the case. I can be a contagious positive attribute to your community. 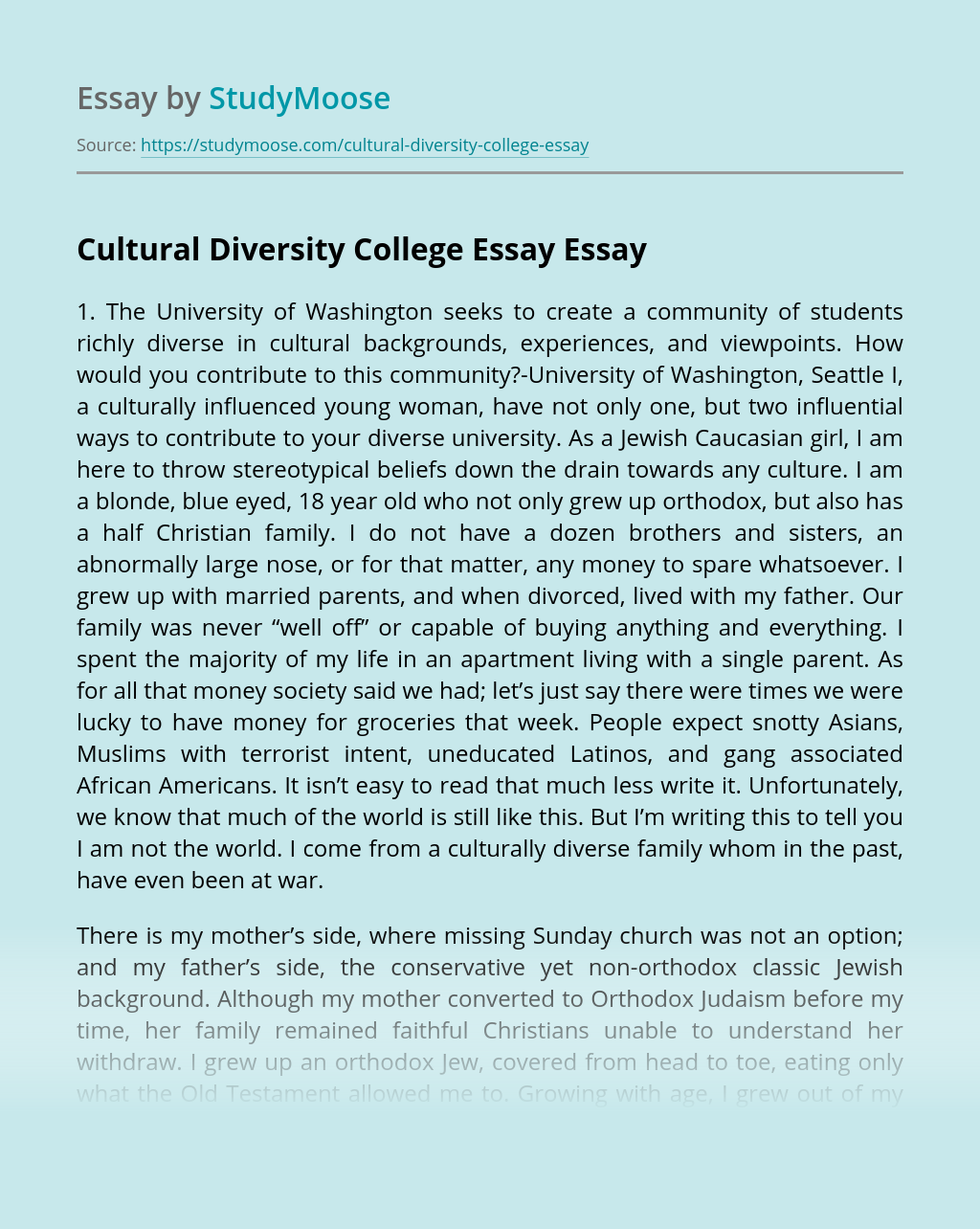 Turn in your highest-quality paper
Get a qualified writer to help you with
“ Cultural Diversity College Essay ”
Get high-quality paper
Helping students since 2015
Stay Safe, Stay Original