Many people tend to dab the “Mauritian culture,” as a homogenous one. Some deny the cultural diversity in the island evolving harmoniously. In this regard, unity and diversity are interchangeable words. Constituting of ethnic groups and world religions like Christianity, Buddhism, Islam, co-existing with Hinduism and myriad spoken languages, the island’s people avow and practice different faiths which are reflected in our customs, rituals, norms, and festivals. Despite the contrasting way of life, the citizens remain essentially united. As Mauritians, we love to say that Mauritius is a twinkling model of unity in diversity.

Turn in your highest-quality paper
Get a qualified writer to help you with
“ Cultural Diversity in Mauritius: Myth or Reality? ”
Get high-quality paper
NEW! AI matching with writer

But then, we tend to do a lot of things which can only undermine the unity of this country.

Unfortunately, diversity is used by many opportunistic politicians for disruptive purposes. After 45 years of independence, ethnicity remains the stratifying factor. Multicultural policies through funding religious groups are considered as empowering minority communities to voice out. In reality such policies have empowered not individuals but their “leaders” who owe their status and influence mainly to their affiliation with the government which benefits in its turn by manipulating the population and projecting their conventional image to the public through such platforms.

At the 473rd anniversary of Maharana Pratab Singh and the creation of the Indian state of Rajasthan on Sunday 19th May 2013 at Indira Gandhi Cultural Centre, Phoenix the Prime Minister asserted that “Diversity should not be divisive. We are from different parts of India, but we are in the same boat. We should not make any difference between us,” as reported by the newspaper Le Défi Quotidien.

As a remedy, several solicit a secular state- a clear separation between religion and the state, which honestly, is not really the case in Mauritius who has lived an enigmatic development of its political history since the pronouncement of the United Nations, on the case furnished by ‘Resistans ek Alternativ’ militating against the exigency for a candidate of general elections to mention his ethnic belonging. Recently in the limelight, the Best Loser System was designed to provide “balanced” ethnic and political representation. Boasting about being “one nation, one people,” what is it about this “balanced” ethnic and political representation? Across several decades since independence, haven’t we evolved and gained enough maturity to catabolise our ‘minority or ‘majority’ complex? If this does not show the erosion of that sense of togetherness in a culturally diverse society, then we wonder what it means. Would a secular state mean that there will no longer be public holidays based on religious festivals, something that exist nowhere else in the world? Would we finally live in a flourishing democracy?

Mindset. The Mauritian psyche is accustomed to doubt the unfamiliar and see “external” social groups as a menace. This demeanour is a real threat to national integration, peace, progress and development. This mentality is derived from fear, suspicion and mistrust in the country. To the newest generations, the 1999 riot in relation to Kaya’s death could be the reason that took a tragedy to uncover the truth of existing communal tension. Pretending that all is well in the society means doing very little to instil social cohesion. How can we expect a progressive change when the communal mentality is being perpetuated across generations? Official reform is one thing but changing the mindset of 1.3 million of people implies kissing impossibility. Nevertheless, many are optimistic and try to manoeuver the next generation through example and education.

Despite all, for some, Mauritius has a marvellous timeline of peaceful cohabitation. We need not go back at the time of independence where we stood together as a one nation to steal a glance of that. April 2013 marked the flash floods which affected Mauritius causing large-scale disasters. The Mauritian solidarity and unity that we were to witness in providing the huge aid to the victims in need were indeed commendable, proving that we may have different religions and skin complexions, but we all belong to one human race. Alfred Adler said “There is a Law that man should love his neighbour as himself. In a few hundred years it should be as natural to mankind as breathing or the upright gait; but if he does not learn it he must perish.” Thus it seems imperative that all Mauritians should bury their petty differences and work collectively. We must create the foundation of a new Mauritius. We cannot be satisfied with the partly biased idea of a harmonious society, pressurising us to believe in a stable nation. Common has it become in this interest-minded world to veil sinister intentions behind this masquerade. Unity in diversity is not a slogan. It is a way of life.

But will the forthcoming generation adopt this way of life? 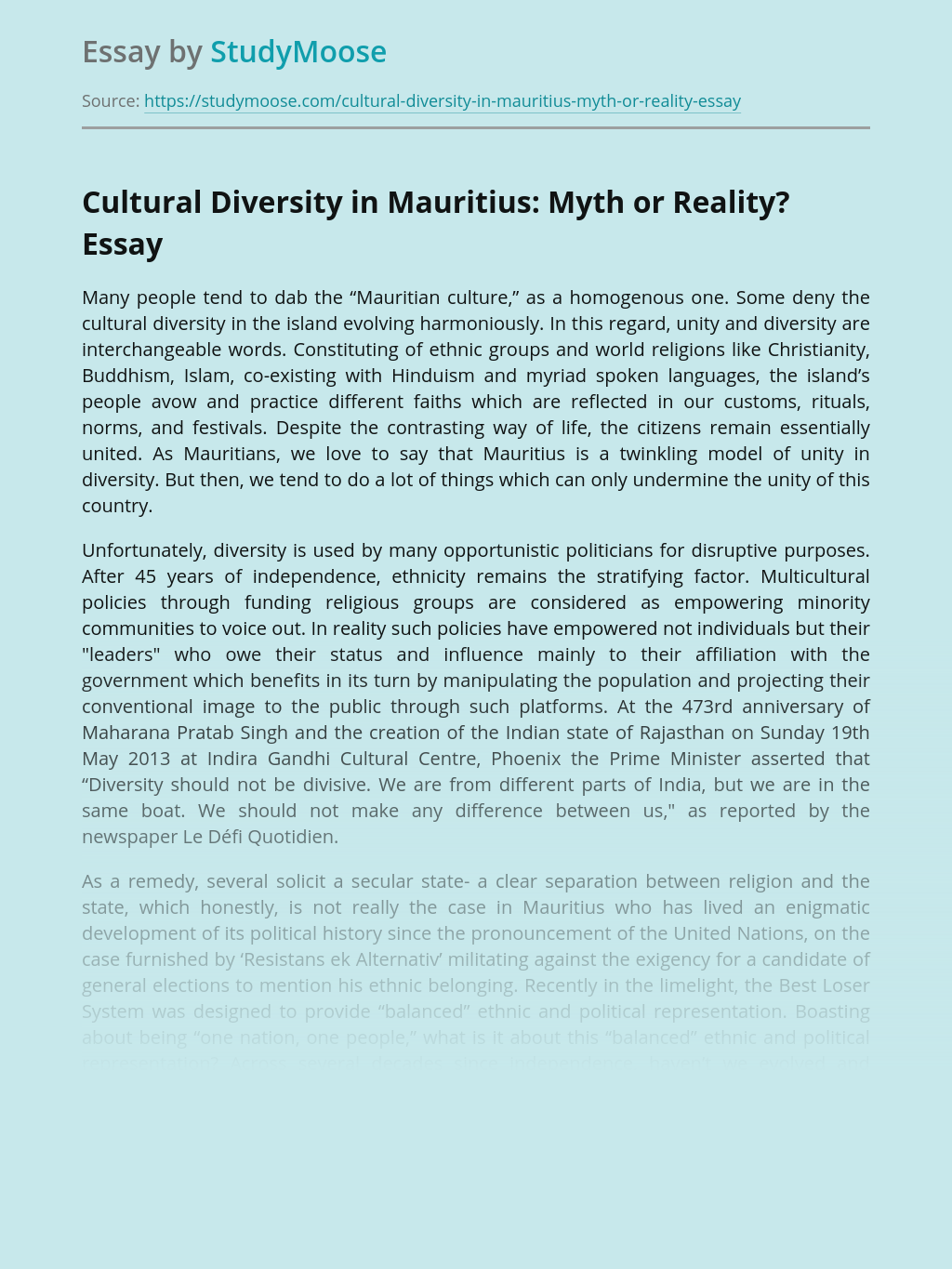 Turn in your highest-quality paper
Get a qualified writer to help you with
“ Cultural Diversity in Mauritius: Myth or Reality? ”
Get high-quality paper
Helping students since 2015
Stay Safe, Stay Original