Critique of the play Hamlet

The Theatrical Play Hamlet was a story about a man name Hamlet who meets a ghost who “apparently” was his father, and tells hamlet to seek revenge for his murder from his brother who was Hamlets Uncle that married his mother. Hamlet love affair sees him insane, but does not now it is fake, later becoming insane killing herself after Hamlet kills her father. The brother and son seek revenge for his family’s death and duals with Hamlet getting himself killed with a poisoned sword.

Don't use plagiarized sources.
Get Your Custom Essay on Critique of the play Hamlet Just from $13,9/Page

The king tries to poison Hamlet, but his wife drinks the poison and dies. Hamlet then proceed to kill Claudius, getting poisoned by the dual sword and dying, ending the play with the royal family dead. To make this story interesting the production group used different elements to help make the audience engaged; the main elements presented were lighting, scenery and entertainment. The lighting in the play Hamlet was for the audience to focus on particular images; it was also used for coordination with the actor and music.

The key element in lighting was colour. An example in the play demonstrating change in mood due to lighting was, when the ghost appears on stage the light would start to flicker to show lightning, this could be to bring fear, or seriousness. Special effects of the lighting were also shown during the soliloquies so the artist can stand out from the background to draw attention to itself from the focus and connection with audience; this was shown by the light only reflecting on the artist. Another element that helped make the play good was the scenery. Each theater is different from its own way especially through the sizes of each stage. Even though the stage was small at the theater attended, the production group did a wonderful job of using the whole space with different objects to make the stage seem alive and big.

Some objects were constantly used to make the setting of particular scenes; an example of this was the wood table that had been made into a bed or a dresser to show a room, a grave for Old Hamlet, a dinner table, and a stage for the Players. Objects were used for setting and visual purposes of clues to prepare the audience for the upcoming scenes. The production group also used the sound/music/dance in the form of entertainment. When a certain character used dance or songs in their performance, it was shown as insanity or an abnormal behavior. The entertainments were used to engage audience and to help them comprehend different emotions. During the play there were few missing scenes such as, the spy that was sent by Polonius for his son Laertes, which held no importance for the group to reenact.

Another scene that was missing was all of the Fortinbras scenes. The reason taken out was due to memorizing extra lines and no effect to the play if it were to not be presented; but by not including this scene the ending was a gray area of not knowing what happens to the throne after all the royals death. The production group had done a wonderful job in the play Hamlet that was about the betrayal of a brother, the revenge for a father, the love and marriage for two people, and the deaths of the guilty and innocent. The theatrical play demonstrated its performance through different elements; the three most important element included lighting, scenery, and entertainment of sound, music, and dance. Even though there was a slight gray area of the missing scene of Fortinbras, the performance itself was unique and amazing to watch.

Critique of the play Hamlet. (2016, Aug 20). Retrieved from https://studymoose.com/critique-of-the-play-hamlet-essay 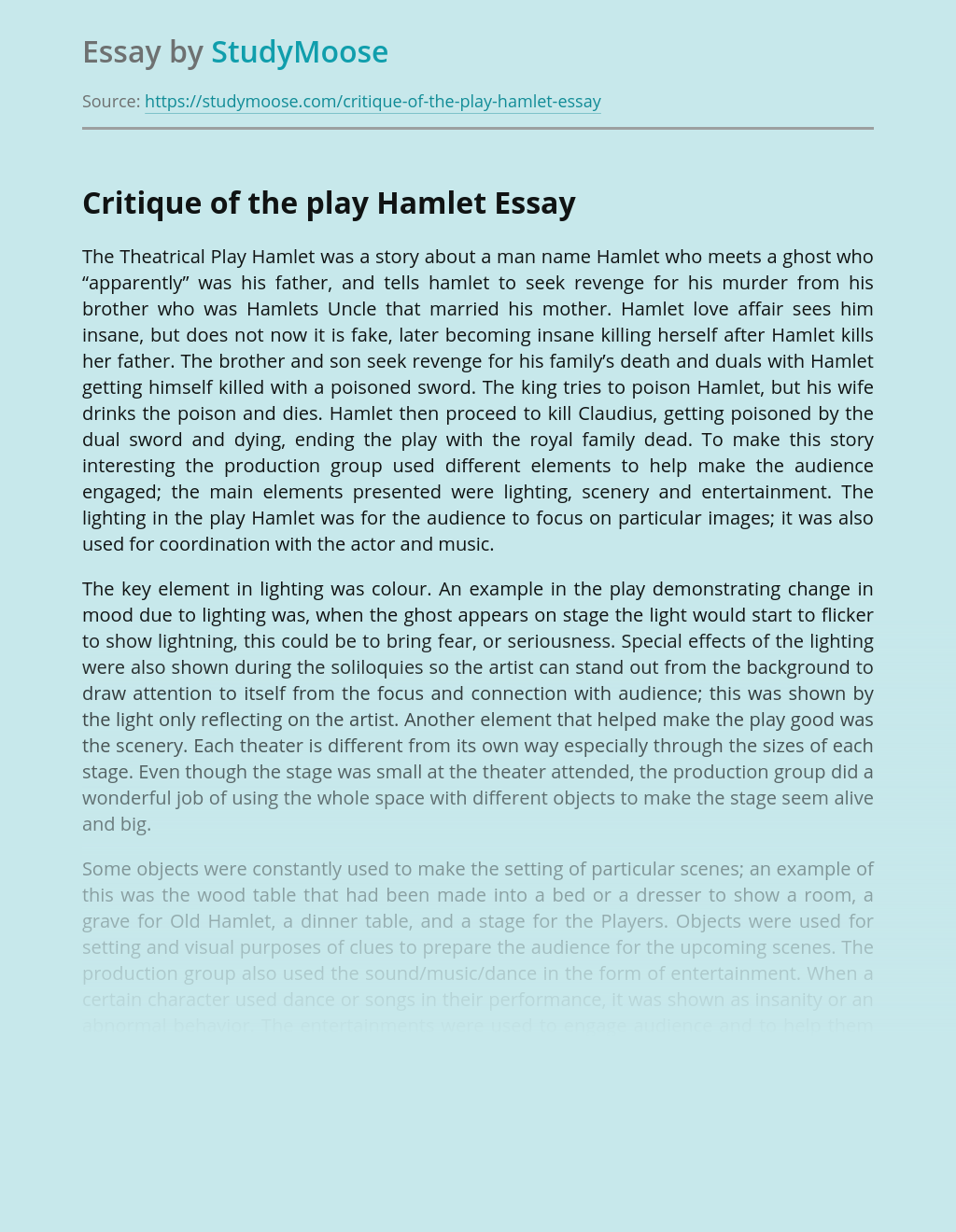 It is without doubt that William Shakespeare has created many unique, thought – provoking characters. Hamlet is by far Shakespeare’s most compelling character. In Shakespeare’s play Hamlet, various character traits, exhibited by Hamlet, can be seen through his foils. Similarities with Hamlet and Horatio’s education, as well as their levels, can be drawn. However, Hamlet’s...

“’Identity has been increasingly used to refer to the social and historical make-up of a person, personality as a construct. Sometimes such identities are conceived narrowly psychological, individualist terms, as the cumulative result of personal experience and family history” This is seen particularly in Beowulf where all men are referred to as their fathers’ sons’....

In Hamlet, one of Shakespeare’s most recognizable plays, Shakespeare portrays a great example of a literary foil between Fortinbras and Hamlet. Fortinbras, a minor character, possesses traits that emphasize Hamlet’s distinctive qualities. Fortinbras’ characteristics bring out both the worst and the best out Hamlet throughout the play. In Act IV Scene IV, Hamlet’s soliloquy points...

What differentiates Hamlet from other plays from Shakespeare is that the action we expect to see, and particularly Hamlet’s action, is continually postponed while Hamlet tries to understand the truth about his father’s death and about what he should do. This play poses a certain number of questions that other plays would have taken for...

Development of Young Hamlet in "Hamlet" by William Shakespeare

William Shakespeare in his play, Hamlet, makes use of a soliloquy in order to help the reader better understand the development of young Hamlet in his quest for revenge. Before being exiled for the murder of Polonius, Hamlet was unable to get himself to kill Claudius, who was responsible for the death of his father....