"The Way Through The Woods" by Rudyard Kipling

We were given a poem called “The Way Through The Woods” by Rudyard Kipling, form this we were told to try and devise an improvised piece using the poem as the source. We found the poem gave us an easy start on devising a play because it has a lot of content. I found that there was a good amount of detail given so it gave us all lots of perspectives and different angles to use, such as: The play could have been about a road through the woods, a ghostly woman, a futuristic play looking back and discovering some ghost stories about a special place or in the past before any ghosts appeared, the making of ghosts (death).

Don't use plagiarized sources. Get your custom essay on
“ “The Way Through The Woods” by Rudyard Kipling ”
Get custom paper
NEW! smart matching with writer

There wee a lot of ideas contributed from the whole group but most were dismissed due to the complexity or the content. Finally we chose to do a play from the past and include the idea of witches to give us more choice of things to include in the play.

I played one of the four witches in the play. My name was Alaina. My voice was supposed to be evil because of me being a witch and I wasn’t allowed to smile. I found this quite difficult because I find it hard to be evil, unfortunately I don’t get much practise at it.

I was made out to be the weakest of all four witches because when we cast our spell I was the one who couldn’t handle it.

My character didn’t really move away from the house, which was situated in the woods because Evelyn (Victoria Elcock), Athena (Samantha Blake) and Alaina (Jennifer Knowlson) did not want to be discovered by the villagers because otherwise their plans to gain revenge on the villagers would be foiled. But there was an insider who was also a witch but lived in the village to get supplies and basically keep the outside witches living.

Evelyn and Alisa (Joanna Ghazaleh) wanted the revenge on the villagers because when they were younger their mother was burnt at the stake for being a witch and so they were left parentless. This gave them a motive. Their revenge was taking four of the villager’s children and beheading them and then burying them. The villager’s obviously hounded out the inside witch and demanded an explanation, this is when they were lead to the murderous outside witches and the bodies were found.

A horseman chased Alisa out of the woods and both of them died giving an explanation of the swish of a skirt in the grass and the sound of the horse’s hoofs. Personally I think overall the play was good, at certain scenes it got confusing but we managed in the end, with team effort, to produce as best a play we could. Improvements could have been made on the contributions of the class, sometimes there was not enough concentration and we could have all probably applied ourselves a lot better.

"The Way Through The Woods" by Rudyard Kipling. (2020, Jun 02). Retrieved from https://studymoose.com/devised-piece-text-amp-2167-new-essay 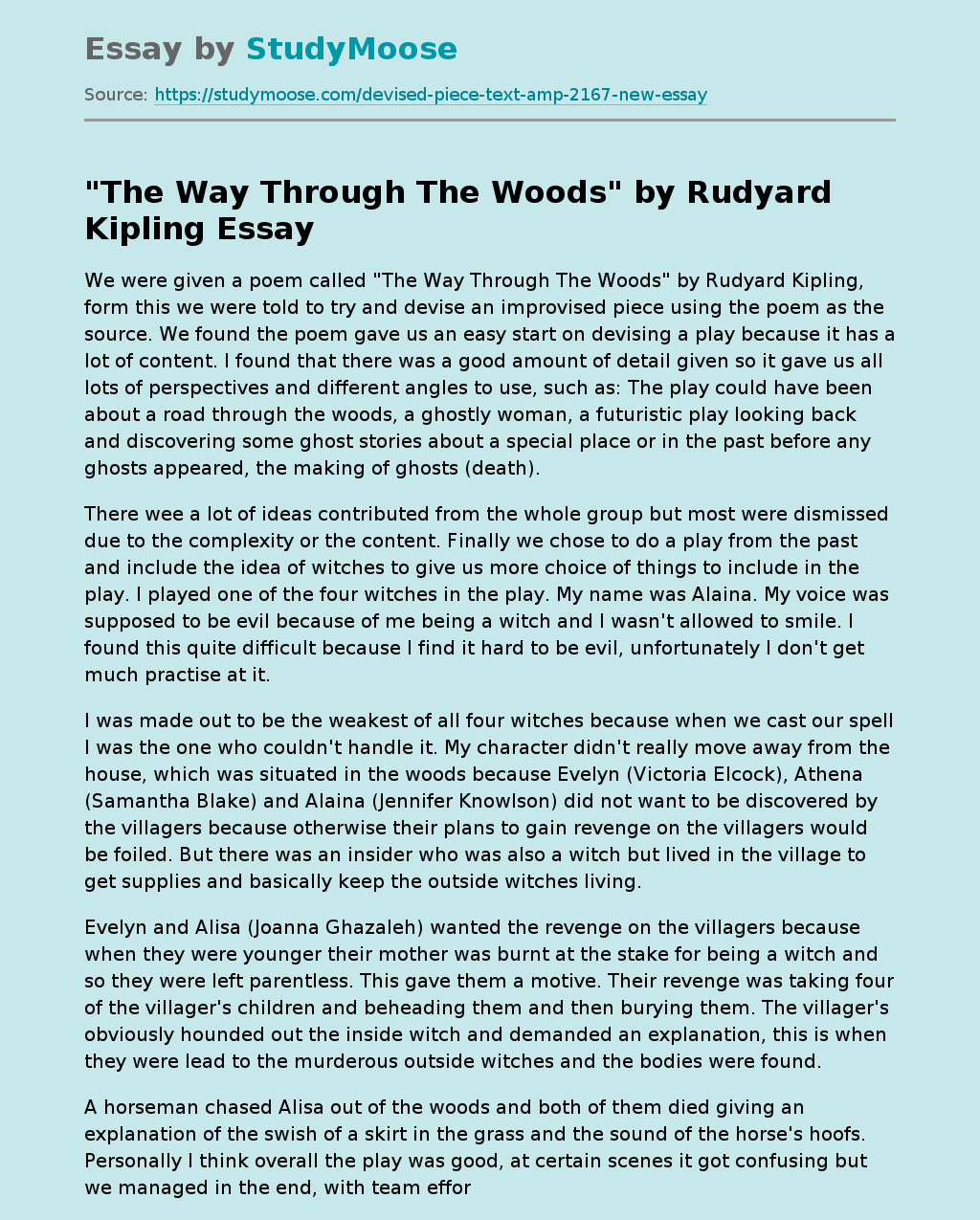