Conflict is inevitable and is something everyone encounters. Individual’s responses are dependent upon their moral conscience, their ideologies or their strengths and weaknesses. An individual’s public persona may differ drastically and oppose their true qualities. In confrontation with conflict ones true identity can be revealed. Although under the pressure of conflict individuals can be provoked to act unwillingly to preserve themselves. The novel ‘The Secret River’ by Kate Grenville portrays the protagonist William Thornhill as a moral individual yet under the pressure of survival and success he weakens.

The reputation of an individual can provoke unexpected sinister qualities. In the play ‘The Crucible’ reputation is tremendously important in the theocratic town of Salem. Various characters base their actions on the desire to protect their respective reputations. Yet in contrast virtuous qualities are revealed under the strain of conflict. Characters such as Reverend Hale and John Proctor show the best of human nature. They strive and fight for what was right and they were prepared to make sacrifices when they encounter conflict.

There is a strong contrast between ones public persona and their true identity which lies beneath. The hypocrisy of Abigail William, the protagonist in ‘The Crucible’, manipulates her friends and the entire town, leading nineteen innocent people to their deaths. Throughout the hysteria of the witch-hunt Abigail’s persona was as an innocent girl who was possessed by ‘the devil’. He true desires were to seek revenge on Elizabeth Proctor. When Abigail’s conflict is not resolved with John and her desires are not satisfied she escapes Salem, taking Reverend Parris’s money.

The town is enlightened to her true vindictiveness and vengeance. ‘I beg you, sir, I beg you- see her what she is’. John Proctor could see the truth of Abigail’s facade yet her public persona was too strong to be contradicted by the people of Salem. In the face of conflict within Salem other individual motives were exposed. The long held hatred of neighbours and the chance for material and personal gain were revealed in the presumably moral, religious individuals of Salem. Ann Putnam’s suppressed anger for the loss of her babies was exposed as she blamed the innocent Rebecca Nurse for her losses.

Ann Putnam finally could expose her true feelings and sinister need for vengeance in the heat of the conflict in Salem. Under the pressure of encountering conflict an individual can loss their probity. In the play ‘The Crucible’ the author Arthur Miller depicts how cruel man can become when fear, suspicion and insecurity overcome reason. Danforth holds a power position within Salem. Under the pressure of the law he is tied between his moral conscience and abiding the law. ‘You must understand.. that a person is either with this court or he must counted against it, there be no road between’.

Danforth extreme position of power in the theocratic government of the time pressures him resolve the conflicts in an inhuman way. From the pressure of conflict he reveals qualities of immorality to protect himself and the court from ridicule. William Thornhill in the novel ‘The Secret River’ is surrounded by adversity ‘…always cold. There was a kind of desperation to it, a fury to be warm. ’ From the fierce determination to strive under encountering conflict Thornhill reveals his immorality to succeed and survive.

Thornhill discovers early on that life cannot seemingly be eked out on hard work alone. His integrity is continually compromised causing a ‘choking feeling’, as Thornhill was not without compassion. ‘It was, he thought, a part of the price they had to pay…for what they would get in the end’. The amalgam of his life experiences, from the struggle to survive as a boy in England to the massacre of the indigenous people, the conflicts provoked decadent qualities within Thornhill. The influence of the fear of maintaining ones reputation can reveal unforeseen reactions.

A parallel can be made between the 16th century and the 21st century, where an individual’s reputation plays such an influence in society and in maintaining ones reputation individuals can become pernicious. Various characters in ‘The Crucible’ base their actions on their desire to maintain a respectful reputation. Reverend Parris fears that Abigail will threaten and tarnish his good name. He preserves his reputation by not testifying against Abigail and her claims of ‘witch-craft’. John Proctor on the other hand protects his reputation by making a heroic choice not to make a false confession. I have given you my soul, leave me my name! ’. Proctor sacrifices his life for the price of a virtuous reputation. In ‘The Secret River’, Thornhill viewed the Hawkesbury as a celebration of the emancipists. ‘There… a man did not have to drag his stinking past around behind him like a dead dog’. Thornhill’s reputation as villain and low class citizen could be forgotten. In Thornhill’s attempt to maintain his reputation as ‘landowner’ and leave his status as ‘felon’ in the past, he acts in retribution to the indigenous people who try to take his new status away from him as ‘landowner’.

In the face of conflict, one can reveal their inner strength of morality and willingness to make sacrifices for virtue. John Proctor sacrifices his life in refusal to make false confessions. Proctor realises that his own soul, his honour and his honesty are worth more than a cowardly escape from the gallows. ‘He have his goodness now’. Elizabeth Proctor states that her husband has given his life for morality and he has finally purged himself for his past action. Reverend Hale is weighed down by his inner struggle. ‘There is blood on my head! ’.

Hale has a guilty conscience for his inability to save the innocent victims of Salem’s hysteria. Hale was prepared to question the legal structure of the time in order to uphold his beliefs and moral conscience. ‘I have sought a Christian way, for damnation’s doubled on a minister who counsels men to lie. ’ Hale account’s himself for the convictions of the innocent and is willing to take any measure prevail in achieving righteousness. In the novel ‘The Crucible’ the characters moral or psychological weakness or strength is revealed by societal pressure.

Contradictory qualities from virtue to vengeance can be exposed when one encounters conflict. The polemic character John Proctor is willing to make sacrifices for his reputation and righteousness. Proctor reveals moral strength in order to save his name and cleanse his soul. On the other hand Reverend Parris protects his name in the face of conflict and contradicts his persona as a minster of God. Under the strain of conflict ones true identity is revealed and their values are uncovered. 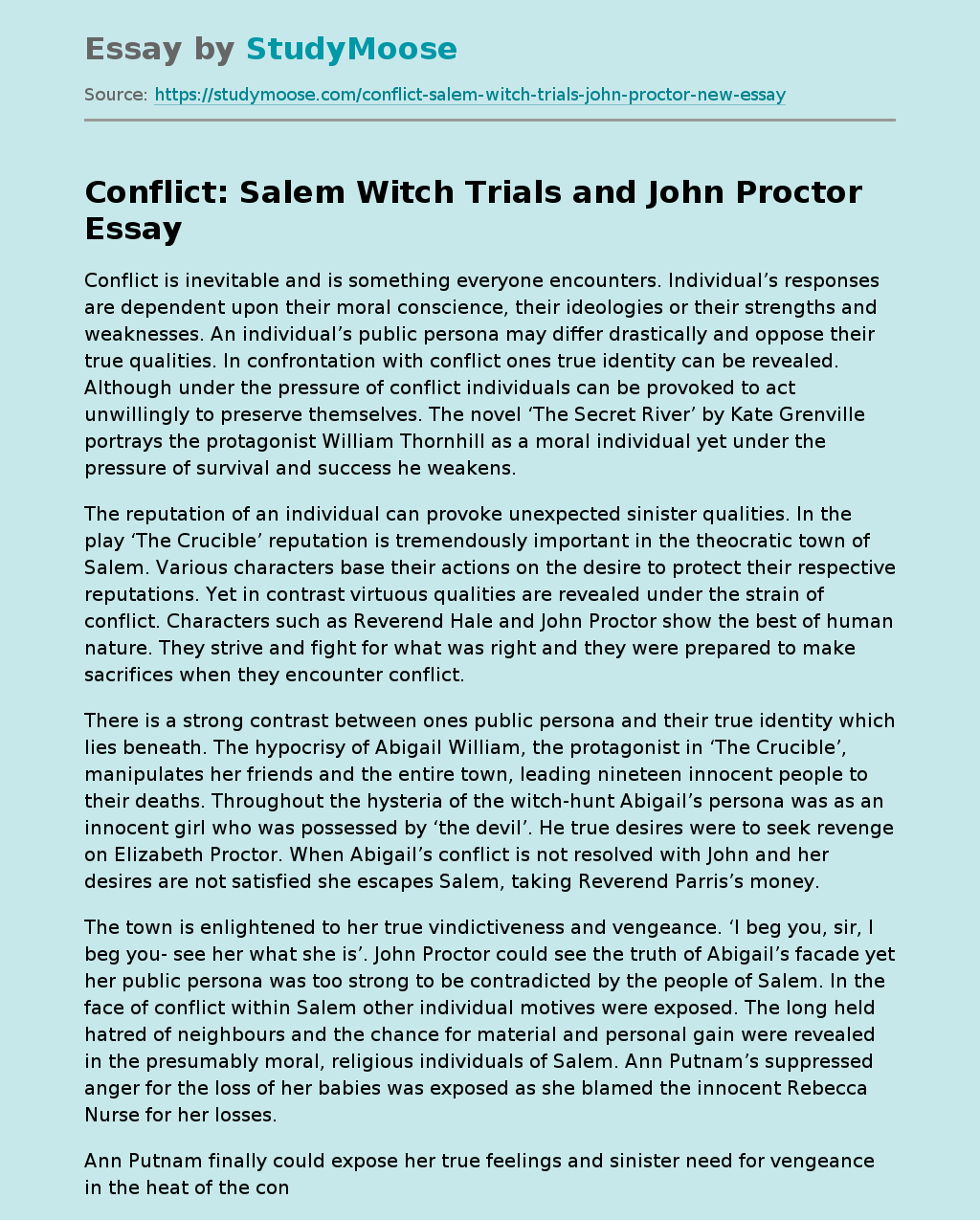