“An eye for an eye makes the whole world blind” – Mahatma Gandhi. The nineteen twenties in America was an age of prosperity and change, as the economy started to recover from the war. The fictional novel, The Great Gatsby was written by an American author F. Scott Fitzgerald takes place in New York. The story primarily concerns the protagonist a mysterious millionaire, Jay Gatsby and his impractical passion and obsession with Daisy Buchanan. Whom he was determined to bring into his life again and step into the same river twice.

Don't use plagiarized sources. Get your custom essay on
“ What Lies Beneath? ”
Get custom paper
NEW! smart matching with writer

Even though the 1920s was a time of celebrations, under the layers of the world to display was cruelty and coldness because of the violence, careless driving and the privileges of the rich.

Firstly, during the 1920s, under the layers of the glamorous, a world to display there, was coldness and cruelty to show because of violence. In the novel, violence is a very prominent theme displayed throughout the plot. Author Fitzgerald uses the aspect of violence to portray power and status in the characters of the novel.

In addition to that in the novel, Tom Buchannan is displayed as a violent and atrocious character. For instance, when Tom and Nick go to New York with his mistress Myrtle Wilson to have ‘fun’. During their time their Tom and Myrtle were discussing whether Myrtle had any right to mention, Daisy, his wife’s name. Tom immediately punches Myrtle when she starts screaming Daisy’s name.

This quote explains how Tom uses physical violence to stop Myrtle, he hits Myrtle to show dominance with his mistress as well as to put her in place. Secondly, at Gatsby’s party in which Nick had attended. Near the end of the party, Nick witnessed a group of people fighting instead of enjoying and celebrating the party. As described “most of the remaining women were now having fights with men said to be their husbands” (Fitzgerald 52). Moreover, this quote from the party scene proves how at Gatsby’s party people were fighting. Thirdly, shortly after Myrtle’s death, when George Wilson, Myrtle’s husband found out that a man named Gatsby had killed his wife, Wilson was furious by both his wife’s betrayal and the hit and run. Believing that Gatsby was the driver of the “yellow car” that struck Myrtle he goes to Jay Gatsby’s home and murders him. As described by Nick after the death of Gatsby “it was after we started with Gatsby toward the house that the gardener saw Wilson’s body a little way off the grass, and the holocaust was complete” (Fitzgerald 154). This quote explains how Wilson used violence and impulsively murders Gatsby out of anger and distress. To conclude, the evidence from the text help support that violence is seen throughout the novel.

Many characters in the novel were driving recklessly. In The Great Gatsby, Author Fitzgerald places vehicles in the hands of the rich to symbolize their wealth and character. Firstly, Jordan Baker displays reckless driving. When Jordan and narrator Nick were on a drive Nick confronts Jordan about her bad driving. As stated by Nick it started because she [Jordan] passed so close to some workmen that our fender flicked a button on one man?s coat? (Fitzgerald 59). This example explains how Jordan the driver at the time had passed very close to the workmen that it almost nicked the button off their jacket. Due to the fact of how fast and carelessly she was driving. Secondly, after Gatsby’s party when Nick was returning home, he had noticed there was a car in the ditch.

A quote from the novel describes the scene at the time in the ditch beside the road, right side up, but violently shorn of one wheel, rested a new coupe which had left Gatsby’s drive not two minutes before? (Fitzgerald 54). This evidence explains how Owl Eyes, the driver of the vehicle and his friend were under the influence of alcohol while driving. This was careless driving due to Owl Eyes drinking and driving it could put other people as well as himself of the risk of getting hurt badly. Lastly, near the resolution of the novel when Gatsby and Daisy were in a car driving back to East Egg after confessing that Daisy never loved Tom, Daisy had killed Myrtle. An example from the novel was when Gatsby was describing what happened to Nick outside of Daisy’s mansion. As Gatsby said, anyhow Daisy – stepped on it. I tried to make her stop, but she couldn’t…” (Fitzgerald 137). This evidence from the text explains how although Daisy wasn’t in the right state in the mind, she still took the wheel and drove. Thus, resulting in the death of Myrtle. In the same situation instead of driving Daisy could have sat in the passenger seat till her mind was at ease. To conclude, driving recklessly represents how careless people lead their lives in destructive ways.

Finally, the most important reason, under the layers of the glamorous to display there was coldness and cruelty to show because of the privileges of the rich. For instance, after Gatsby’s death when Nick was calling Daisy to inform her that Gatsby had passed away, she had fled the city because Daisy had killed Myrtle. . In the following quote, Nick explains his frustration at how the rich got away with everything. “let other people clean up the mess they had made” (Fitzgerald 170).

This quote refers to how although Daisy killed Myrtle instead of stopping the car, she fled the scene and was not charged for her actions Secondly, on Nick’s drive to the restaurant when Gatsby was speeding. He had gotten pulled over by the cops but instead of getting fined, he is released and is not charged for his action. As illustrated by Nick “taking a white card from his wallet, he waved it before the man’s eyes” (Fitzgerald 67). This quote describes how although Gatsby breaks the law by over speeding, he can get away from it because he did the minister a favor once. Lastly, when Nick had gone to meet his cousin Daisy, at the dining table Tom started discriminating. As stated by Tom, “it’s up to us, who are the dominant race, to watch out or these other races will have control of things” (Fitzgerald 18). This quote explains how Tom is racist and ignorant as he thinks he is above everyone due to his status and colour. Therefore, to conclude the old and new rich were able to get away with a crime due to their wealth and status.

In conclusion, The Great Gatsby shows us how while the nineteen twenties were good times under the layers of glamour’s world to display there was violence, caress driving and privileges of the rich. Firstly, many characters such as Tom and Wilson portrayed violence.

Secondly, the characters in the novel were driving reckless which put many lives in danger. Thirdly, the old rich and new rich had privileges that allowed them to break rules and get away with it. Moreover, the nineteen twenties had both its pros and cons.

Essay on Novels
Cite this page

What Lies Beneath?. (2019, Nov 27). Retrieved from http://studymoose.com/what-lies-beneath-example-essay 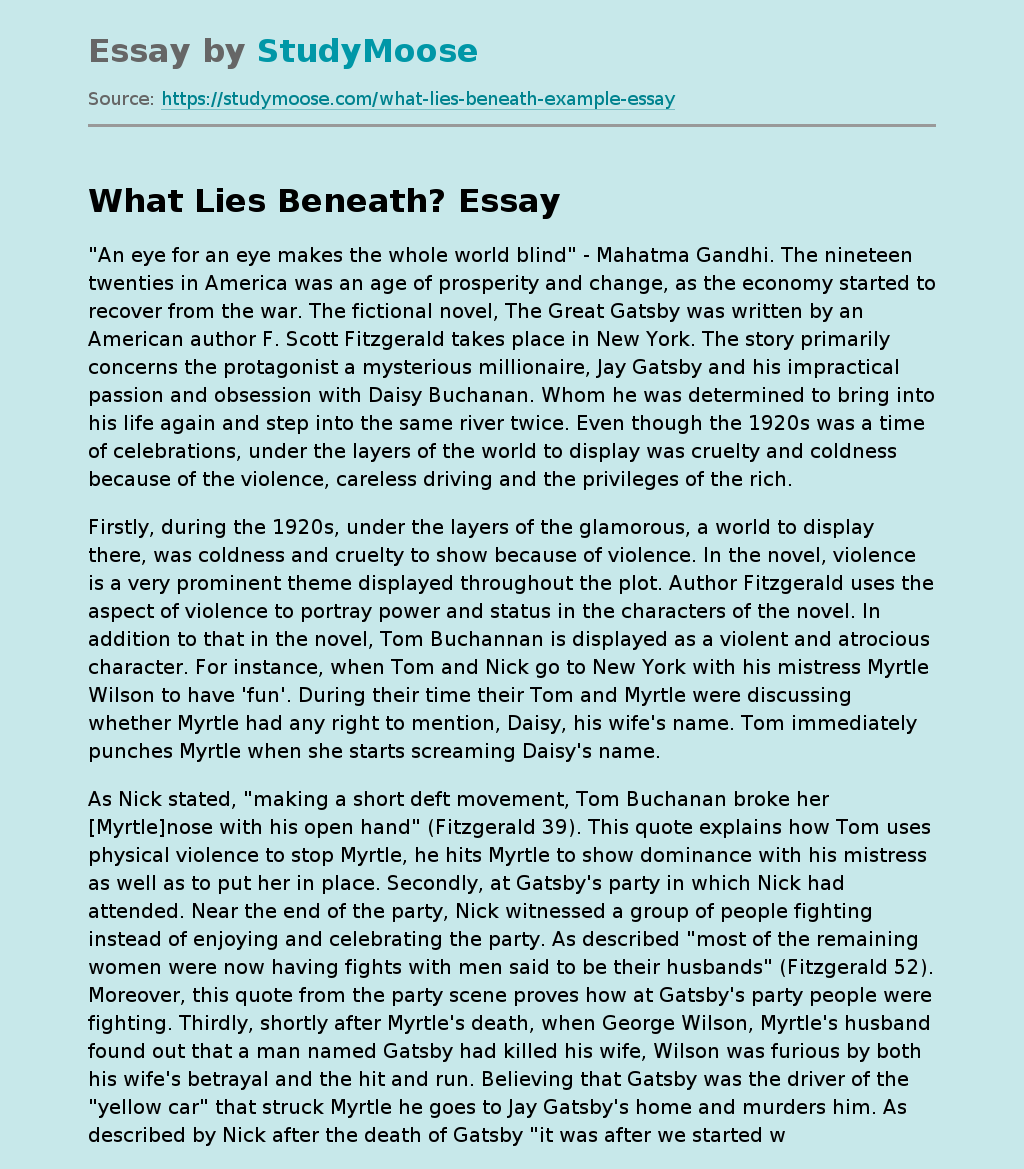