Lorna Dee Cervantes: Beneath the Shadow of the Freeway

The form of the poem is not easy to determine. It consists of six stanzas of uneven length, which are, except for the first and fifth, again divided into sub-stanzas. The meter is irregular as well as the length of the verses and there is also no rhyme scheme. Cervantes plays very freely with the structure of poems. She does not use an established type of poem and ignores rhyme and meter, but she presents her words graphically in the form of stanzas, in separate but related sections.

Get a verified writer to help you with Lorna Dee Cervantes: Beneath the Shadow of the Freeway

The six main parts are numbered. It can be assumed that the arrangement of the verses was done consciously and that it aims at a certain reception on the side of the reader.

Each time a stanza or sub-stanza starts, a kind of pause emerges. This also allows the poem to have spatial and temporal leaps without transitions, but it also increases the difficulties concerning the understanding of the text. In addition to that, many things are only vaguely hinted or ambiguously presented.

The inherent continuity of the poem is achieved by its themes and by its imagery.

The first section deals with “the shadow of the freeway”, the image that is also in the title of the poem. It becomes obvious that the speaker lives next to a freeway; she can watch it right across the street from her porch. Every day she notices that the shadow of the freeway lengthens. This is interesting, because freeways usually do not cast shadows, they are flat.

This seems to suggest that the freeway is actually a metaphor, so the speaker lives next to either a real or a metaphorical freeway.

The family is introduced in the second part. It is an all-female family, consisting of three generations: grandmother, mother, and daughter. Grandmother is a “Queen”, mother is “Swift Knight, Fearless Warrior”, who wants to be a “Princess” instead. The speaker herself is conflicted by her role in the family. Because she cannot decide, she becomes a “Scribe”: a translator, someone who does “light man work”. These fairytale images contrast sharply with that of the freeway. They are a magic, mystic family that live next to a cold, plain freeway.

In the third stanza the tense of the poem changes from past tense to present tense. Nature imagery is shown; it tells about seagulls and birds. Nature is again a contrast to the freeway. The last two lines of this part: Grandma “trusts only what she builds / with her own hands”, can be read as a hint that the freeway, not being built by oneself, is not to be trusted. This passage also contains accusations against men. The male mockingbirds are, in contrast to men, singing for their wives and “They don’t leave their families / borrachando”. This is said by grandma and it is very likely that she is speaking out of her own experience. In the poem the woman-family, left by their men, shows the difference between the imperfect human world and the idealized idea of nature: the mockingbirds’ family-structure is still intact. Men are to be made responsible for the destruction of the human family unit. This is made explicit in the next stanza.

Grandma’s husband is described as “a man who tried to kill her”. Now if he indeed attempted to murder his wife or if he tried to kill her physically, would not make too much of a difference. It is shown that men are violent and the destroyers of the family. The tense is again past tense. The men of these women belong to the past; they are history. Grandma became a strong and self-reliant woman after being together with her husband. The family is shown as being happy by not having men, who could endanger their content lives.

But the harmony of the female family is threatened. In the following stanza the speaker describes a man, entering the house during night, violent, drunk and spreading fear. It is not clear who he is; probable the man of the mother, but it could also be the grandmother’s husband. Most of this part is written in dialogic form, but it is uncertain who is speaking or who is addressed. It is also ambiguous what time this section refers to. Past tense is used, but conjunctive in the first line “in the night I would hear it” indicates that something similar happened (or happens?) more than once.

The last section is finally harmonious and presents a positive outlook, also concerning men. Written in the present tense it tells about the present and the season is summer. It starts with a dialogue between one of the women and her daughter. It is probable the mother talking to the speaker. She gives her pieces of advise, which are mainly warnings of men. She has had her experiences and does not have any illusions, but the daughter is more idealistic and trusts in a sort of natural law: “If you are good to them / they will be good to you back”. And it seems as if the speaker got confirmed in her opinion, because she is sleeping “with a gentle man / to the hymn of the mockingbirds”. This final stanza then also tells about the future. The things the daughter plans to do refer back to the grandmother. The three generations are thus linked together in cyclic harmony.

A relationship with man can be achieved, if independence is preserved and confidence is only placed in oneself. The bond of the family, the unity between mother and daughter will always be stronger than any relationship between man and women. The mockingbird, which lives the ideal of a natural family including the male, is definitely a positive image and also a contrast to the freeway. The bird accompanies the grandmother’s patchwork and the speaker’s sleeping with her gentle man. The freeway is mentioned again in the last stanza, but this time without any negative connotations. It is just said that it is “across the street”.

This is just a neutral statement, the freeway does not cast any shadows anymore. The natural, the mockingbird, and the unnatural, the freeway, have come to terms with each other. One could also argue that the mockingbird stands for the loving and caring female concept, involving instinct and nature, whereas the freeway expresses the male notion, being unnatural and without feeling and thinking, a “blind worm”. Just as nature and environment have to struggle with human progress, women have to struggle with men.

A lot in this poems stays ambiguous and vague. Very often the voices of the three women are not to be identified; their identities merge and this increases the notion of continuity and connection among three generations of women, in which men will always be outsiders, even if they are “gentle”.

Lorna Dee Cervantes: Beneath the Shadow of the Freeway. (2016, Jun 21). Retrieved from https://studymoose.com/lorna-dee-cervantes-beneath-the-shadow-of-the-freeway-essay

Get a verified writer to help you with Lorna Dee Cervantes: Beneath the Shadow of the Freeway 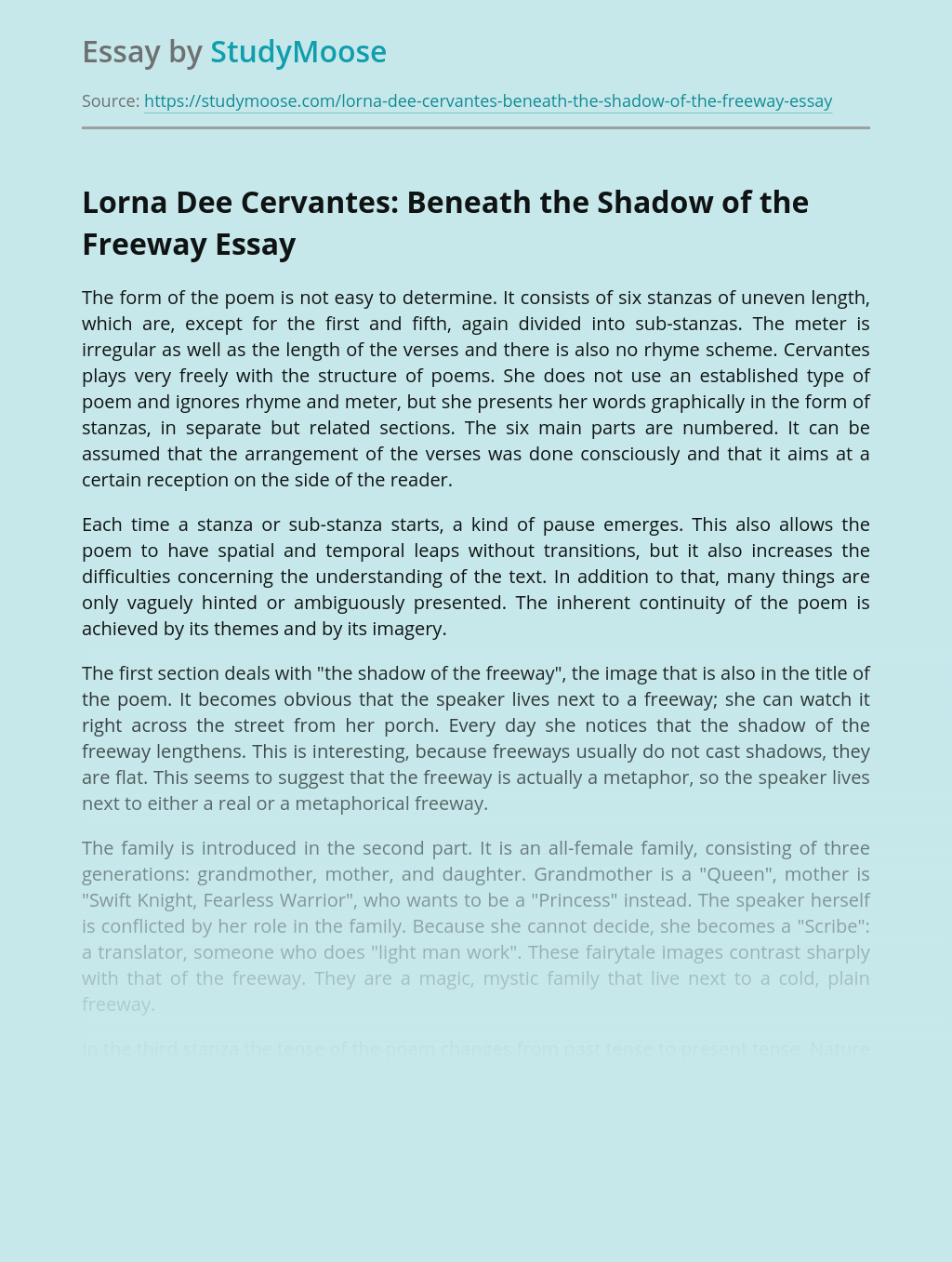 Waniek’s “The Century Quilt” not only illustrates the importance that her Meema’s quilt had in her life but also represents her family, specifically her grandmother. Through many literary devices such as vivid imagery, symbolism, and structure, the author is able to create not only a reminiscent tone, but also depict how Waniek is hopeful for...

Get Essay
About "Relic" By Ted Hughes

Although nature may be seen as a beautiful way in which different living creatures coexist, Ted Hughes however sees this differently. In the poem Relic he writes about how the creatures in the sea use each other as a means to their end. In this poem, the persona has found a jawbone on the sea...

The Literary Elements of “Annabel Lee”

Analysis of A Poem Diptych

‘Diptych’, by Robert Gray is a free verse poem in which imagery is used to invoke feelings, but also specifically influence a reader’s first impression of character. Throughout the poem Robert Gray has swayed natural speech, used strong imagery and also included poetic tone to create a poem which allows insight to his childhood. Robert...