The title of this book is Shadow Spinner. It was written by Susan Fletcher. The book Shadow Spinner is many stories within a story. The story takes place in the older days way back then. The 2 main settings are the Harem and the bazaar. The setting affects the story by kind of setting the mood of how the story is going to go. It also affects what the characters do, what they eat, what they wear, what their religion is, and what language they speak.

The settings important because it affects everything about the story and gives us signifigent information. Marjan is the most important main character. I would describe Marjan as brave, risky, trustworthy, and kind. She is very brave and risky because she snuck out of the harem 3 times and she did it knowing she could be killed. A reason Marjan is trustworthy is because Shahrazad gave her lots of money, gold dinars, to get a story from the bazaar and she could have just stolen them and run , but she didn’t she stayed on task.

Lastly, Marjan is kind because when shahrazad asked for her to help she did when could have said no she didn’t want to.

The 2nd most important main character is Shahrazad. I think you could consider Shahrazad creative, bold, and sharp. Shahrazad is creative for coming up with stories and telling stories to save her life. She is bold for volunteering to marry the Sultan when no one else wanted to because he was killing off a wife each night.

She is sharp when Dunyazad suggested a story to tell, but out of the hundred she had told she remembered she already told that one. Dunyazad is Shahrazad`s little sister. She caring naive, adventurous and rich. Dunyazad is naive when it comes to the world outside of the Harem because she doesn’t know anything about the bazaar. She becomes adventurous when she wants to go with Marjan when she sneaks out of the harem. Now Dunyazad is obviously rich because in the story she is a princess.

The Sultan is a curious, confused, and a worried, but then kind man. He lets Shahrazad live every night because he is curious to see what happens next in her story. When Marjan comes to tell him a story he is not sure who listen to, the Khatun or Marjan, he is confused. Once the Sultan`s first wife cheated on him when he marries again he is very worried so he starts to kill off wives. Yet, in the end the Sultan has a change of heart and becomes a very kind man. The Khatun is a mean, mischievous, and always suspicious if others. Soraya is a slave of the Khatun and the Khatun beats her because she thinks something is her fault. Marjan notices Soraya is following her so she starts to get suspicious of the Khatun because this seems very mischievous. The Khatun is always suspicious that people are always trying to kill her son and that Shahrazad has another lover. I noticed in the book how they also described her as smelly.

In the novel Shadow Spinner, it is about a Sultan that gets married, but the love of his life cheats on him so he never trusts again. Every night the Sultan re- marries and kills his wife. Then a woman named Shahrazad offered to marry him and figured out a way to stay alive. What happens is, every night she tells a story and cuts it off at an exciting point so the Sultan would let her live another night to hear the rest of the story. Soon Shahrazad is out of stories to tell. One day she meets a girl named Marjan, and Marjan tells stories. Marjan goes through a lot to get stories to keep Shahrazad alive. She does crazy things like escape the Harem (which could get her killed). Along the way she gets passed many obstacles like the Khatun. Marjan also meets the story teller who she gets the stories from and also sends stories by messenger pigeons.

Towards the end of the story, after Marjan escapes for good she decides to go back and tell the Sultan a story. This story is about him. Marjan is trying to get the point across to him through the story. From her story the Sultan learns that Shahrazad loves him and it makes him very happy. He then asks for forgiveness from everyone, he feels terrible for what he has done. He promises to never do it again. Dunyazad, Shahrazad’s little sister lets Marjan go so she could go live a new happy life. In this story the characters change from beginning to end. For example the Sultan has a change of heart and realizes everything wrong he has done and now is a good person.

I also believe this experience has majorly changed Marjan, she has gotten a whole new life and she probably has a new perspective on life. Lastly I think Shahrazad has changed because now in the end there are no more stories told, which means no more stress and no more fear. So now Shahrazad can live a happy life. This book has really changed my way of thinking about words, stories, and lessons. I have also learned about human behavior, how much someone can change because of one thing in a story.

I think my thoughts have changed, so has my perspective on people’s feelings and thoughts. I enjoyed reading this book. There were a lot of ups and downs in the story. It also had a very good moral and actually this story is many morals and stories within one main plot. The part I hated the most was when Soraya died. I’d have to say my favorite part was in the end when the Sultan finds out Shahrazad loves him, he wants to celebrate, and Marjan goes with Zaynab , Ayaz and the story teller to live new lives. This was a well written novel. 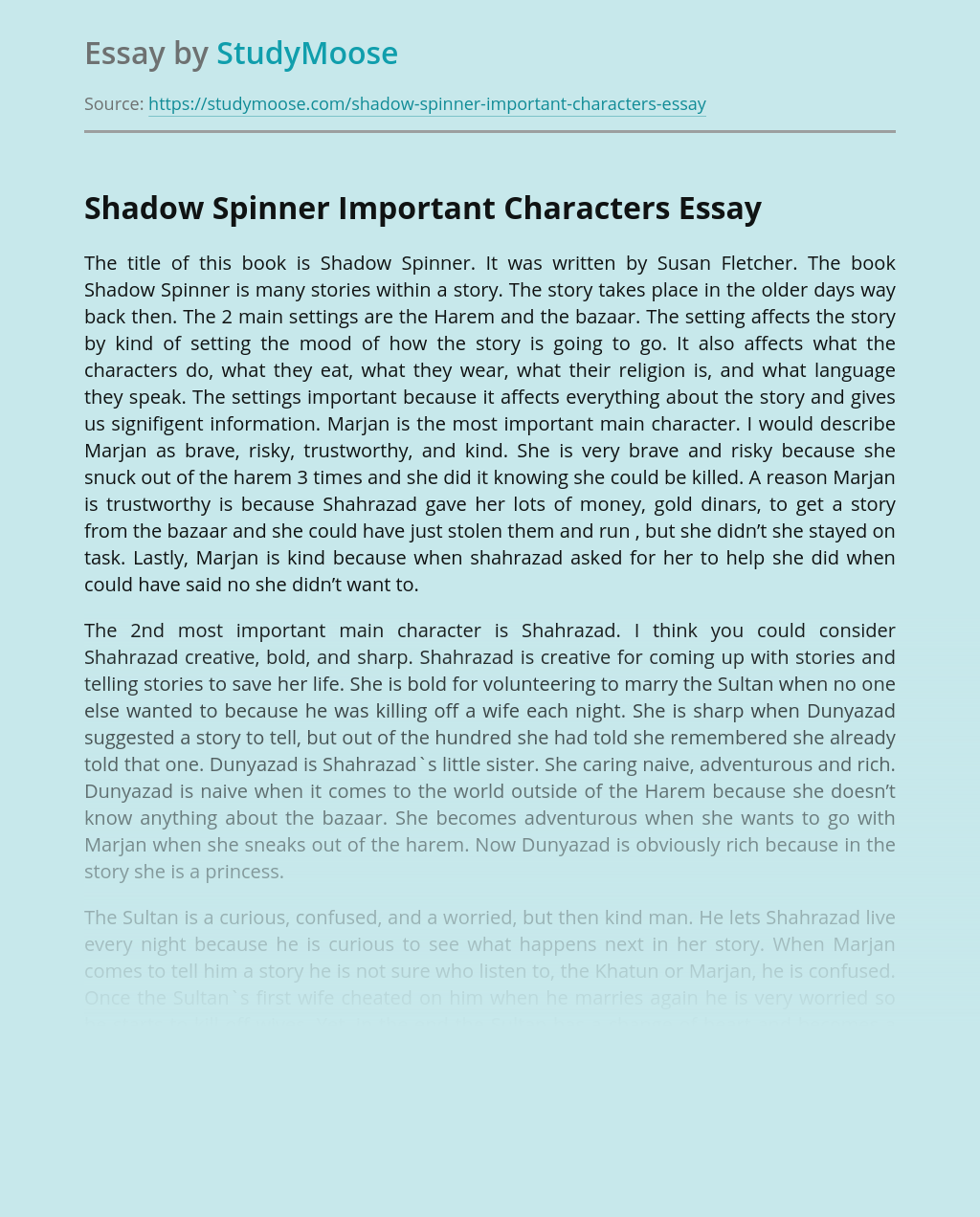