Poems-in the Shadow of Signal Hill

In the Shadow of Signal Hill

Signal Hill is a strikingly shaped hill or small peak overlooking the harbour of Cape Town. It has been used as a lookout post since the early days of the Cape colony. From it, the viewer can see Robben Island, the bare scar where the suburb of District Si stood before its occupants were evicted and its buildings demolished and Langa, a black township on the outskirts of suburban Cape Town.

The overall significance of the title of the poem is that “Signal Hill” represents the higher, white authority or white government of the Apartheid era.

Don't use plagiarized sources. Get your custom essay on
“ Poems-in the Shadow of Signal Hill ”
Get custom paper
NEW! smart matching with writer

The government overshadowed their whole lives and basically made their choices for them.

The word “shadow” also bears a connotation of fear in general. When one looks at children’s books, one will notice that the antagonist in the stories would be a “shadowy figure”. Therefore the “Shadow of Signal Hill” suggests the white government is the antagonist in terms of them being wrong in what they are doing – which is initiating Apartheid in South Africa.

1. in the howling wind

2. by the murky waters

3. of the sea
a cold, unpleasant atmosphere is created.

Metaphor: howling wind might refer to the cries of the black people, their pleads for freedom and equality.

4. children of colour – refers to coloureds, Asians, black people and all others who suffered under the Apartheid regime.

6. and hold them to their ears

7. and listen to the lamentations of slaves – cries/ weeping of the slaves. “lamentations” connects with “howling wind” which emphasises the suffering of the black and coloured people.

9. in the howling wind

11. of the sea
repetition of the first three lines adds emphasis to them.

12. sons of langa – Langa was a black township on the outskirts of suburban Cape Town. Langa not only represents the houses of the township, it also refers to the people who lived in Langa, therefore Langa is a community. “sons of langa” – the generation of the townships. This implies that the future generations will also be affected by Apartheid, whether it has ended or not.

13. gather at the ruins of district six

14. and sharpen the spears of the night

15. and the heroes from the island urge
This possibly represents someone like Nelson Mandela, the infamous freedom-fighter.

16. go towards the fiery dawn . . .
fiery: to be angry: the speaker suggests that the coloured or black people are angry, as it is expected since they have been treated like slaves by the white government for most of their lives. ”fiery dawn” also suggest that an “angry break of day”, meaning that the coloured people wake up angry in the mornings. They are angry and frustrated with their circumstances.

dawn: -the beginning of a phenomenon or period of time. -the break of day.
Here it is suggested that the “fiery dawn” is indeed a new period of time which will commence. (The time of post-Apartheid.) The coloured people are angry and will take this anger and fight for their freedom.

. . .: the ellipse is used effectively instead of a full stop. A full stop would end the poem. But the ellipse signals that the poem is not finished yet. It also resembles time passing. This symbolises that slavery will never come to an end, and no matter how much time passes, Apartheid will always be in the minds of the future generations. But they will keep on fighting for freedom in the future until the government treats everyone equally.

Patel is a committed political poet and worked on various poems regarding the aspect of politics.

“In the Shadow of Signal Hill” is an example of a protest poem. The poem has no punctuation marks or capital letters. This adds to the protest of the speaker. By ignoring common English grammar rules he strengthens the idea of protesting.

No punctuation marks means no stopping or pausing when one reads the poem. This also represents the image of the sea; the sea never stops moving, its waves will continuously crash on the shore, move back and repeat the process. Therefore by removing punctuation the poet effectively creates movement in the poem.

Another reason for the lack of punctuation is to stress that there is no stopping slavery and discrimination. It is a never ending problem which will always continue to show its head somewhere else in the world.

At comment 12, the highlighted words: Are they wrong/misinterpreted? I don’t know if your comment is a good or bad one.

Futhermore, I think the tone is a sad, depressed tone when I read words like “murky” “shadow” “howling wind” “dungeon of death” “lamentation”. When I read the poem, I almost feel sorry for the slaves and children. Maybe this is also what the poet wants – to create an emotional atmosphere so the reader can empathise with the black people.

I read the other students’ analyses and I agree that the word “children” is used to suggest innocence, and this stands in contrast with the rest of the tone of the poem. My thoughts are that the images of “murky waters” and “howling wind” also contrasts against “children”, because children are the symbol of happiness, laughter and care free circumstances. This, however is not the case with Langa. therefore the word “children” is used effectively to create contrast.

I read the other students said that the spears of the night is a metaphor for the black people fighting back. “night” and “spears” usually have negative, dark connotations, but in this instance it is the opposite: the black people represent freedom and light because they want to fight for what is fair and right. Then I also thought that, although one reads it as “night”, it can represent the homophone “knight”. this will make absolute sense in the context of the poem and the explanation just given. (it is like “Bustle in the House” where “morning” can be heard as “mourning”.) “Knight” also has a positive connotation. In medieval times the knight represented the good. A princess was saved by a knight in shining armour.

Poems-in the Shadow of Signal Hill. (2016, Mar 21). Retrieved from https://studymoose.com/poems-in-the-shadow-of-signal-hill-essay 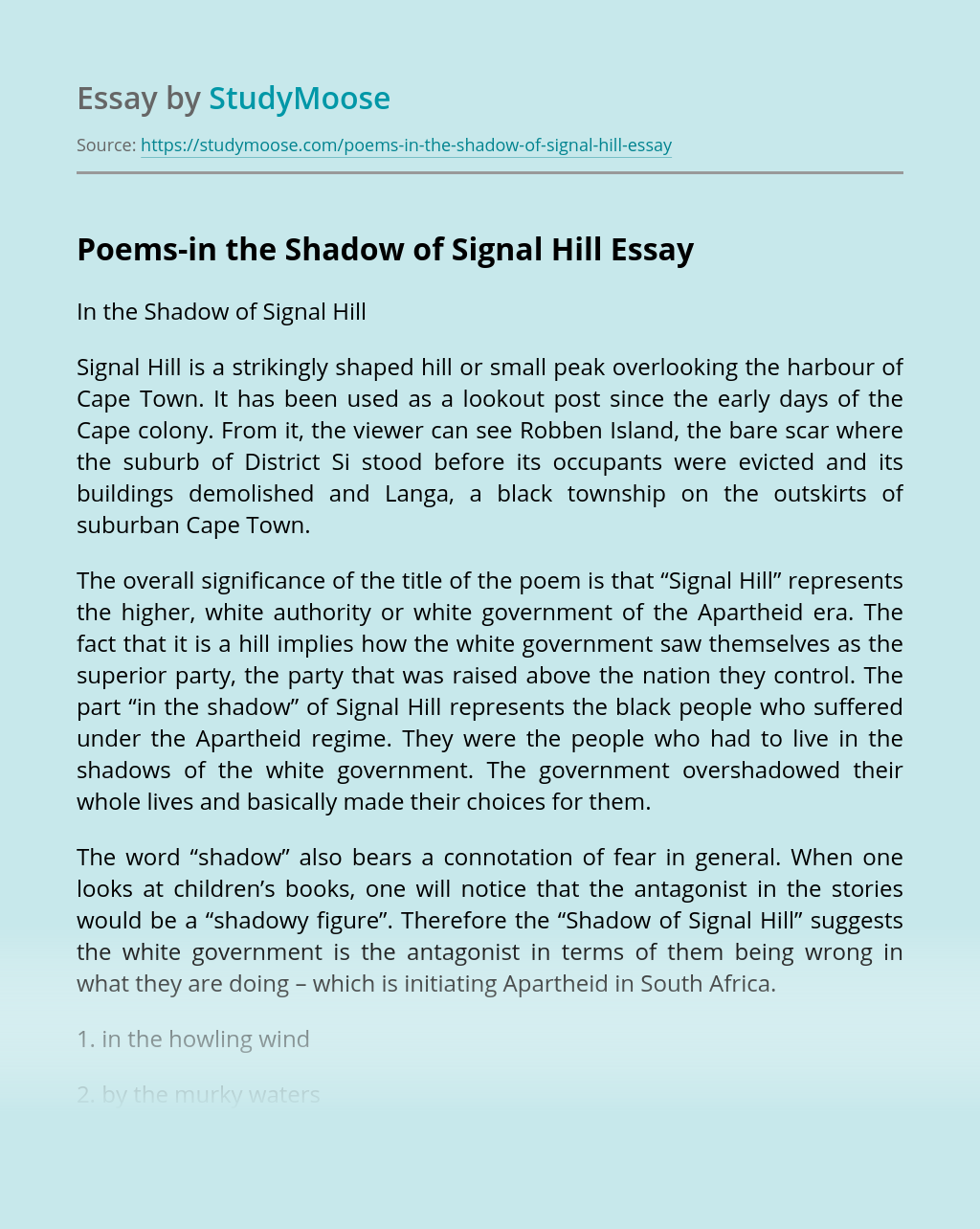