Celebrated cases of Judge Dee, a detective novel which describes crime cases which happened in China during the Tang Dynasty, in the 7th Century. In the book Judge Dee is a well known magistrate of Chang Ping, whom and is famous for solving crime and maintaining justice, particularly amongst common the Chinese People. In the book, Judge Dee is faced with three murders. As Judge Dee begins solving the crimes, the story unfolds slowly and presents historical, social, legal, philosophical and even religious pictures of ancient China.

Don't use plagiarized sources. Get your custom essay on
“ Confucianism and Celebrated Cases of Judge Dee ”
Get custom paper
NEW! smart matching with writer

Tang Dynasty China was a period in which society was strongly influenced by Confucianism, due strongly to the previous influence of the Han Dynasty.

In order to examine the stories, the Confucius principal should first be discussed in great depth. Confucius sees social order as a series of status groups and graded roles, from the ruler at the top through officials, scholars, gentleman, all the way to the father of the family; all with authority over, as well as a responsibility to set a good example to those below them. The key element of these interpersonal relationships is right relationships (also known as five relationships).

These relationships refer to the ties between father and son, ruler and subject, husband and wife, elder brother and younger brother, and those between friends. [1]

The relationship between father and son, according to Confucius, is that children always respect their parents and parents always are a moral model for their children. Between ruler and subject, the rulers are responsible for taking care of his people, trust his subject and be a good model, while the subjects should remain loyal and faithful to their rulers. The husband should treat his wife respectfully, while the wife should support the husband. The elder brother should be a good role model and take good care of and younger one, while the younger one should respect the older brother (brothers being fraternal to each other). Finally, friends should be honest and trustworthy toward one another.

From the five relationship principle, every person has many roles to play in this life , or in this society, and must obey these five relationships so that the world and the universe can improve toward perfection. These relationships are also interchangeable and relative. For example, a father in family can also be a subject to the rulers, a friend to other people and meanwhile a son to his mother. It s therefore believed that every person has a duty to follow through with their role within society, a concept which is clearly upheld by Judge Dee throughout the book.

In Celebrated Cases of Judge Dee, there are many cases follow the Confucius guide previously mentioned. For example, one of Confucius’ Analects says, “In order to increase the peace and harmony in society, appoint the honest and empathetic to office.”哀公問曰:「何為則民服?」孔子對曰: 「舉直錯諸枉,則民服;舉枉錯諸直,則民不服。 」[2]. Similarly, the Judge Dee story follows this Confucian principle, as evidenced by the original introduction: “If, therefore, a judge is honest, then the people in his districts will be at peace.”[3]. If a judge, as a ruler to the people in the lower level, can be honest to the people, then the people will obey and the society can remain in order, as portrayed within the right relationship principle between ruler and subject.

Readers can also see this principle applies in the cases which face Judge Dee. The story begins with the murder of a travelling silk merchant, whom was traveling with another merchant. The merchants were travelling together for safety, when one of them murdered the other, sold the victim’s possessions, and ran away to live a wealthy life. When caught, the merchant placed all blame on someone else. The relationship portrayed between these two merchants, according to Confucianism, is one between friends (Confucius states that friends should be straight, honest, trustworthy and well informed in order to benefit in life). However, the merchant Shao thought differently. Instead of being a trustworthy and honest friend, he ruins the relationship between friends, and commits the murder, thus creating chaos in society.

Another murder case n the story takes place in Huanghua village. A woman, Mrs Djou, had an affair with Mr. Hsu. Later Mrs Djou murdered her husband Bee Husn in order to have Mr. Hsu marry her. Mrs. Djou even gives her little daughter drugs so that her daughter cannot tell on her. Mrs. Bee, Mr.s Djou’s mother in law, had been ill since the time of her son’s death, though Mrs. Djou neglected this fact and did not try to take care of her. These behaviors broke three principles of the right relationships. First, Mrs. Djou committed a severe crime of killing her husband, and broke the relationship between a husband and a wife.

Also, she gave drugs to her own daughter, ruining the relationship between the parent and the child. A mother should be a good model and take care of her child, but she failed to do that. Moreover, she ignored Mrs. Bee’s illness instead of trying to cure her, once again breaking the relationship between parents and children. Mrs. Djou failed to be a mother and here, failed to be a daughter in law. At the end of the case, Judge Dee sentences Mrs. Djou to a painful execution for murdering her husband and having an affair with another man. Mr. Hsu is sentenced to strangulation because he took part in the crime of having a affair with Mrs. Djou.

However, there is another person who gets punished, Doctor Tang, Mr. Hsu’s teacher. Dr. Tang is the host teacher of the private school, and lives with all his students, taking charge in the supervision of his pupils. During the tribunal, Judge Dee told Doctor Tang, “You, a man of wide learning and many years experience, have failed miserably in your duties as a tutor. The crime of adultery took place in your house, and, as it were, under your very eyes…….you are strictly forbidden ever again to engage in the teaching of students.” [4]The Judge then proclaims to Mrs. Bee(though does not in fact punish her), “You failed in your duty of supervising the conduct of your daughter-in-law, and consequently two heinous crimes were committed in your house.”[5] This relates again to the Confucian theory of right relationships. The elderly should play his/her role as an older person in the Chinese society, or else the society will go without order, and though Mrs. Bee doesn’t get punishment, the words Judge Dee says clearly portray interpersonal relationships in Chinese society.

Throughout the story the concept of right relationships is so important that people get punished, or scolded when they fail their Confucian duty. Doctor Tang was both elderly and a teacher, and is therefore responsible as a teacher, mentor, and supervisor in the lives of his students. However, he fails his duty as a teacher. According to the story, because Mrs. Bee and Dr. Tang did not do their duty of watching and guiding the younger ones (daughter in law and students), they indirectly let the crime take place and caused the tragedy.

Throughout Celebrated Cases of Jude Dee, the relationship between ruler and ruled, between friends, husband and wife, parents and sons/daughters, the elderly and the younger remains incredibly significant, and continuously guides interpersonal relationships. Those whom did not follow the standards of the right relationships were met with punishment from Judge Dee, strongly exemplifying Confucian morality as a whole, and in many ways portraying a large aspect of Tang era society. 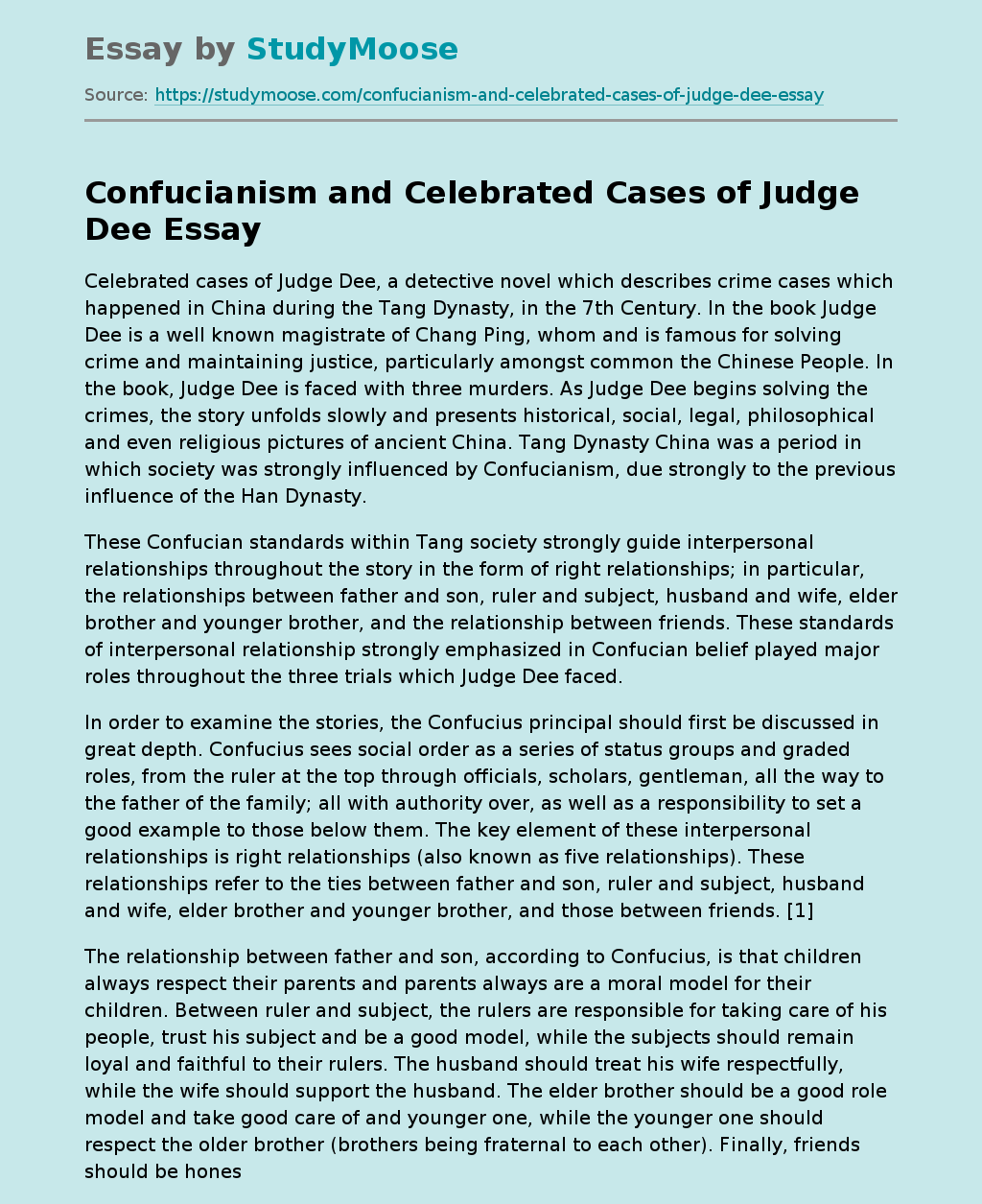