To Kill a Mockingbird: Don't Judge a Book By Its Cover

People are like books. Every book has its own unique story to tell. Unless you open the cover of a book and explore its story for yourself, you can never really understand it. People are the same. Unless you understand their actions, you never see their core. The characters’ stories in Harper Lee’s To Kill A Mockingbird have many pages that lead the reader to create an opinion. They have complex tales filled with many good and bad chapters. Without reading into the characters’ actions, the reader can not truly understand them.

Don't use plagiarized sources. Get your custom essay on
“ To Kill a Mockingbird: Don’t Judge a Book By Its Cover ”
Get custom paper
NEW! smart matching with writer

Harper Lee suggests that most people have some innate goodness. This message is optimistic but generally true. A few characters embody the author’s message. Three characters in the story have a core of goodness, but are misunderstood through their actions, are Arthur Radley, Mrs. Dubose, and Tom Robinson.

Arthur “Boo” Radley is one of the most misunderstood characters in To Kill a Mockingbird. a shy man who lives down the street from Scout and Jem.

He never comes out of his house or shows his face in town. Because of his absence, kids make up terrible stories about him, such as his involvement with the Cunningham gang, and his father keeping him imprisoned in the Radley house. “ According to neighborhood legend, when the younger Radley boy was in his teens he became acquainted with some of the Cunninghams from Old Sarum, an enormous and confusing tribe domiciled in the northern part of the county, and they formed the nearest thing to a gang ever seen in Maycomb…The doors of the Radley house were closed on weekdays as well as Sundays, and Mr.

Radley’s boy was not seen again for fifteen years”(6). This rumor has directly stemmed from Arthur’s absence from Maycomb’s community.

It is revealed that Arthur is just shy, and not a criminal at all. This goes to show how being an introvert leads people to make ridiculous conclusions. A minor detail where Arthur’s kindness is overlooked and misinterpreted is his pecan trees. “The Maycomb school grounds adjoined the back of the Radley lot; from the Radley chickenyard tall pecan trees shook their fruit into the schoolyard, but the nuts lay untouched by the children: Radley pecans would kill you.”(9) Based on the Radleys’ bad reputation, the pecans were treated as poison, much like Arthur himself. He lets his pecans fall onto the school lot for the children in an act of kindness, but for next to no good reason, the nuts are labeled deadly. Boo’s goodness shines through once more when he kills Bob Ewell to save Scout and Jem. “” Who was it?” “Why there he is Mr. Tate, he can tell you his name.” As I said it, I half pointed to the man in the corner … “Hey Boo” I said”(270). Boo saving Jem and scout from Bob demonstrates how much he cares for them, and how far he is willing to go to protect them. It shows that he was truly misunderstood from the start. Boo is first introduced as a “malevolent phantom”(8), and he gets a terrible reputation for being shy. Unfortunately, it takes until the end of the story for Scout and Jem to realize what a nice man he actually is.

Mrs. Dubose is introduced as a vicious, “horrible old lady”(106). She seems like a nasty person who does nothing but talks down to Scout and Jem. At first glance, there is no goodness whatsoever in her heart. The truth behind her actions is that she cares about Scout and Jem, and is forcing the ideals of her time upon them. Mrs. Dubose still clearly clings tight to the ideals of the “old south”, and has different morals from the next generation. “She had her view about things, a lot different from mine, maybe son, but… she was the most courageous person I ever knew” (115). From the outside, her actions seemed bitter and cruel. When put under the microscope, it seems like she might care about the children. Despite having outdated values, Mrs. Dubose is only trying to help Scout and Jem. Jem hates Mrs. Dubose particularly because of her comments on Atticus’s profession. At first, she seems to dislike Atticus because he is “lawing for niggers”(105). The fact is that Mrs. Dubose really has a lot of respect for Atticus, and the whole Finch family, and is simply disappointed in him for going against her image of a Finch. “Yes indeed, what has this world come to when a Finch goes against his raising? I’ll tell you!” She put her hand to her mouth.

When she drew it away, it trailed a long silver thread of saliva. “Your father’s no better than the niggers and trash he works for!”(105). Mrs. Dubose is very traditionalist, and she is only disappointed in Atticus out of respect. She acts out, not in anger, but in fear that the ways of the old south are disappearing. While Jem reads to her, Mrs. Dubose sometimes seems uninterested, and completely inattentive. She goes limp and quiet before her alarm clock rings and Scout and Jem leave. They do not find out until after she dies, that Mrs. Dubose was a morphine addict. She was trying to get clean before she died. The old lady only had Jem read to her for distraction while she went through withdrawal. “Jem said, “You mean that’s what her fits were?” “Yes, that’s what they were. Most of the time you were reading to her I doubt if she heard a word you said. Her whole mind and body were concentrated on that alarm clock. If you hadn’t fallen into her hands, I’d have made you go read to her anyway. It may have been some distraction”(115). Mrs. Dubose’s fits were at first inexplicable to Scout and Jem at first. When Atticus explained her situation, it brought her into a whole different light. This is a shining example of Harper Lee trying to say that most people have some goodness on the inside. Mrs. Dubose was “the dragon” of the neighborhood, but no one had cared to understand her reasons and this led to her being seen as an evil lady.

Tom Robinson is misunderstood because of the racial prejudice that most people held in that time. Tom is a kindhearted person, but since he is black, many of his actions are misinterpreted by the racist community. During his incident with Mayella, Tom decides to run away. Running is viewed by the court as a sign of guilt. “Were you so scared that she’d hurt you, you ran, a big buck like you?” “No suh, I’s scared I’d be in court, just like I am now.” “Scared of arrest, scared you’d have to face up to what you did?” “No suh, scared I’d hafta face up to what I didn’t do.”(207) In reality, Tom only ran because he knew things could be misinterpreted. He was aware of the prejudice that surrounded him and all black people at the time. Even though he ran, he still ended up in court, and his attempt to avoid a misunderstanding ended up being another nail in his coffin. Tom gets misunderstood once more when he says that he “feels sorry” for Mayella. “Yes, suh. I felt right sorry for her, she seemed to try more’n the rest of ‘em—” “You felt sorry for her, you felt sorry for her?” Mr. Gilmer seemed ready to rise to the ceiling. The witness realized his mistake and shifted uncomfortably in the chair. But the damage was done. Below us, nobody liked Tom Robinson’s answer. Mr. Gilmer paused a long time to let it sink in”(201).

In the setting of this novel, it was disrespectful for a black man to feel sorry for a white woman. So much so that even a respectable black man should never feel sorry for the poorest white woman. Tom was feeling sorry for Mayella as one person to another. The white jury only saw a “negro” feeling sorry for a white woman, which at that time was borderline criminal. When Tom tries to escape from prison, people see it as a typical “nigger” behavior. “To Maycomb, Tom’s death was typical. Typical of a nigger to cut and run. Typical of a nigger’s mentality to have no plan, no thought for the future, just run blind first chance he saw”(243). Atticus explains that Tom was “tired of white men’s chances” and wanted to take his own. Tom’s irrational escape attempt is misunderstood by the community as blind, animal behavior. In fact, it was his breaking point after being abused for so long by the white people of his community. Tom Robinson was a good person, but the color of his skin, he is misunderstood, and this leads to the unfair death of a good man.

Three characters that exemplify Harper Lee’s message of core goodness are Arthur Radley, Mrs. Dubose, and Tom Robinson. Although they are good at the core, most don’t bother to explore the pages of their stories. Most of the other characters see their unappealing cover and label them a crazy man, a mean old hag, or a primal negro. Arthur Radley is called crazy because he is an introvert.

To Kill a Mockingbird: Don't Judge a Book By Its Cover. (2020, Sep 13). Retrieved from https://studymoose.com/to-kill-a-mockingbird-dont-judge-a-book-by-its-cover-essay 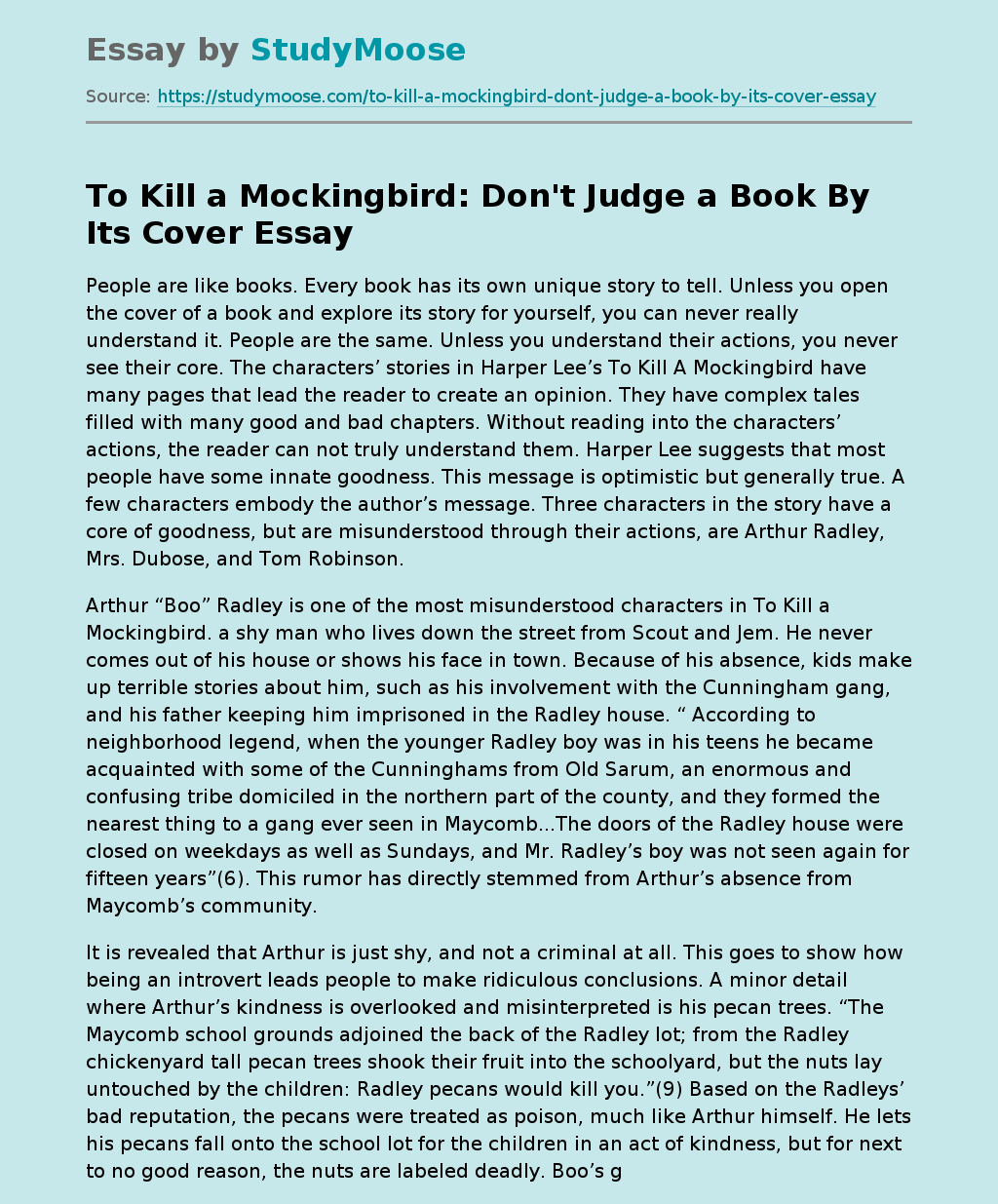