Courage in To Kill a Mockingbird Book

Courage, you have probably heard of this word before but what does it actually mean? Well, according to dictionary.com, an online dictionary, courage means the quality of mind or spirit that enables a person to face difficulty, danger, pain, etc., without fear. In the book, To Kill a Mockingbird, courage is evidently portrayed when Atticus does what no white man would ever dare to do in those days, lest they be scorned by the community. Atticus had the courage to stand up for a Negro, a black, Tom Robinson.

Don't use plagiarized sources. Get your custom essay on
“ Courage in To Kill a Mockingbird Book ”
Get custom paper
NEW! smart matching with writer

This happened in chapter 17 to chapter 22.

Courage, to me previously was just being brave and nothing else. However, after reading about Atticus act of standing up for Tom Robinson, I realized that courage is actually more than bravery. It is also daring to do what no other person would have done. It is about taking risks, regardless of the outcome, that you will do your best. Atticus had himself subjected to the exile of majority of the white community after he took that risk of standing up for Tom Robinson.

In To Kill a Mockingbird, courage is described in different ways.

“I wanted you to see what real courage is, instead of getting the idea that courage is a man with a gun in his hand. It’s when you know you’re licked before you begin but you begin anyway and you see it through no matter what.” Chapter 11, Page 118. Harper Lee portrays courage in this manner, to explain for Atticus defending of Tom Robinson later on in the story.

Harper Lee also portrays courage in this way, such that she tells the readers that courage is not of a physical thing, like shooting the mad dog, but rather, on a more intellectual scale.

The one place where a man ought to get a square deal is in a courtroom, be he any color of the rainbow, but people have a way of carrying their resentments right into a jury box. As you grow older, you’ll see white men cheat black men every day of your life, but let me tell you something and don’t you forget it – whenever a white man does that to a black man, no matter who he is, how rich he is, or how fine a family he comes from, that white man is trash. Chapter 23, Page 227. Atticus understands the lack of
courage which most white men have in those days. They cheat black people everyday of their lives, for fear of being scorned by the community. As Atticus says, no matter how rich that WHITE man is, the moment he mocks a black, that lack of courage not to stand up for him, that man is trash.

So it took an eight-year-old child to bring ’em to their senses…. That proves something – that a gang of wild animals can be stopped, simply because they’re still human. Hmp, maybe we need a police force of children. Chapter 16, Page 163. This is not a direct quote but rather an indirect quote to what Scout previously did. Scout had the courage to save her father. She stood up, an eight year old, against a gang of adults and brought a gang of wild animals to their senses. Scout did bravely what her father had no courage to do.

It was times like these when I thought my father, who hated guns and had never been to any wars, was the bravest man who ever lived. Chapter 11, Page 106. Scout said this when Atticus was friendly towards Mrs. Dubose, one of the meanest ladies in Maycomb. Harper Lee, through this statement, portrays courage as being brave in the face of danger; this danger being Mrs. Dubose, who is not exactly fond of Atticus and is always criticizing him through his children.

Neighbors bring food with death, and flowers with sickness, and little things in between. Boo was our neighbor. He gave us two soap dolls, a broken watch and chain, a knife, and our lives. Chapter 31, Page 284. Boo Radley had the courage to save Jem and Scout, he had GIVEN them their lives. Boos courage was probably one of the most tear-jerking moments in the story. Boo Radley was portrayed as a psychopath and one that would TAKE peoples lives. He did quite the opposite with Jem and Scout. Boo finally took the courage to prove wrong the citizens suspicions and went to the rescue of Jem and Scout. Boo was a hero.

Finally, the setting of Maycomb contributes greatly to the theme of courage as Harper Lee portrays Maycomb as a Negro-hating society, one which has no one that bothers to stand up for Negroes and a psychopath that has a thing for killing. Atticus and Boo himself break this spell of a scared Maycomb by Atticus standing up for a Negro and Boo saving the lives of the two children. The setting was probably most crucial in portraying courage as one of the main themes in the story. All in all, I think Harper Lee was trying to bring across the message that courage is not just about being brave, not just physically, but also being mentally strong and ultimately, daring to take the greatest of risks just like what Atticus did when he stood up for Tom Robinson. After reading the text, I am very convinced that Harper Lee was able to bring across a stirring ad convincing message that courage is not what we actually think of it and that there is much more to that.

Courage in To Kill a Mockingbird Book. (2016, Jul 29). Retrieved from https://studymoose.com/courage-in-to-kill-a-mockingbird-book-essay 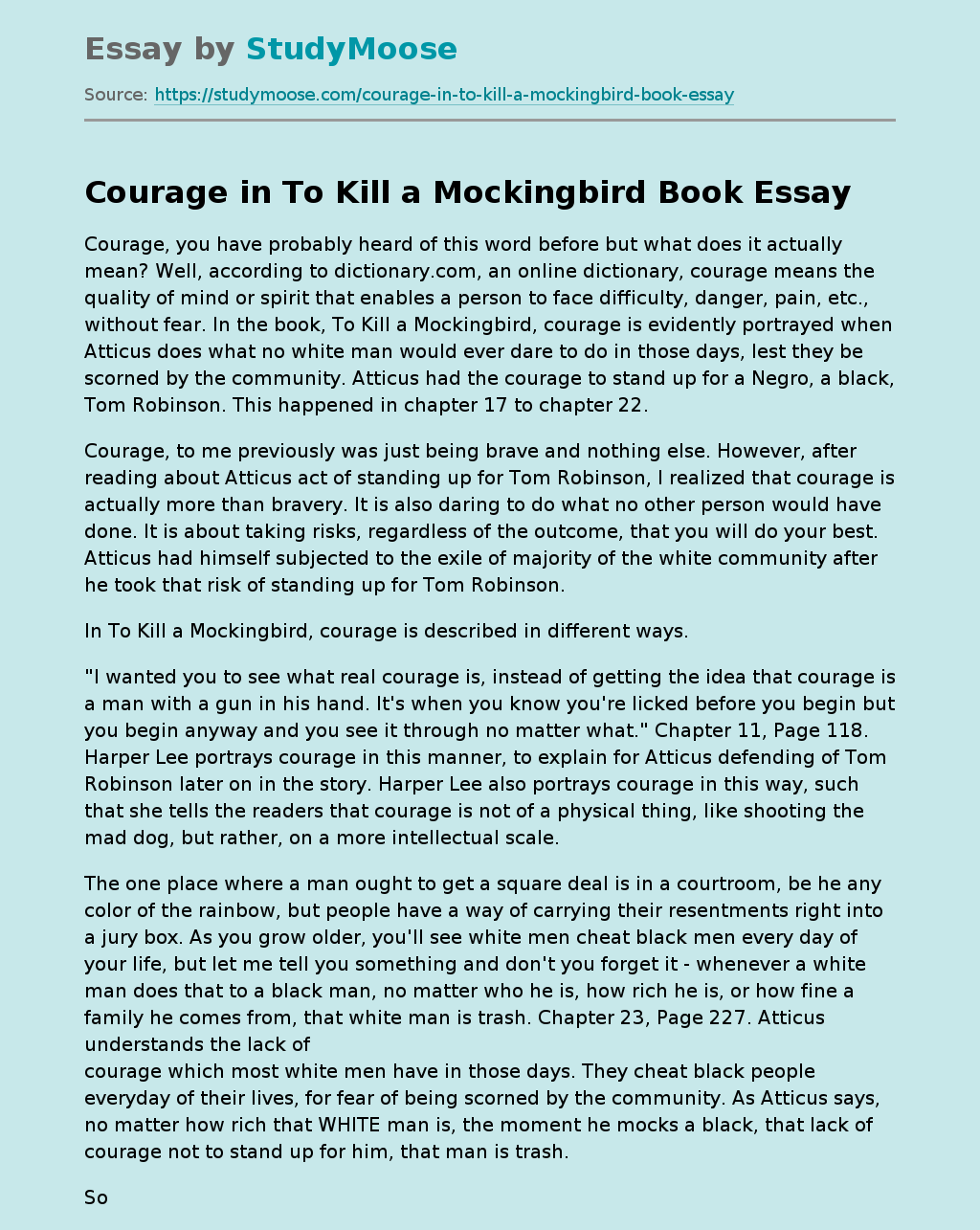