Lessons in the Book "To Kill A Mockingbird"

The lessons in the book To Kill A Mockingbird include as the kids grow up, they learn different lessons about their life. These life lessons could be good or bad, but all children deal with these experiences as they grow older. The book To Kill A Mockingbird, shows those lessons through Jem and Scout Finch. Set in the 1930’s Depression in the small town of Maycomb, Alabama. Scout and Jem learn new things about life as they go about interacting with various townspeople.

Don't use plagiarized sources. Get your custom essay on
“ Lessons in the Book “To Kill A Mockingbird” ”
Get custom paper
NEW! smart matching with writer

These life lessons they learn include not judging others, showing courage when there are difficulties, and fighting against racial stereotypes and prejudice.

To start, a big lesson they learn is to not judge others until you take a walk in their shoes and see life how they do. They learn an important lesson like this from their father. An example of this is when Scout’s new teacher got angry with her because she already had known how to read, and would read with her father every night.

Miss Caroline on of her teachers, told her to no longer read with him at night. But in turn it annoyed Scout because she loved to read.

However, her dad steps in and tells her not to judge someone until you see their point of view. He says, “You never really understand a person until you consider things from his point of view… until you climb into his skin and walk around in it.” (22.) He then explains to her that it was Miss Caroline’s first year teaching and she was just learning a new way to teach things, including the Dewey Decimal System.

Another example of how not judging others is a good life lesson at the end of the book is when Scout is on Arthur Radley’s porch and she realizes what life is actually like for him.

She then realizes he can see almost the entirety of the neighborhood, and he doesn’t need to go outside because he can experience the feeling of being there by looking out the window. Another life lesson they learn is that it is good to fight against racial prejudice. The main example they learn it from is when Atticus is defending Tom Robinson in court because he was accused of raping a white women, Mayaela Ewell. Atticus is a very courageous man who won’t judge someone based on the color of their skin, so he took the case and defended his honor the best he could. While in court he said, “You know the truth, and the truth is: some Negroes lie, some Negroes are immoral, some Negro men are not to be trusted around women-black or white… there is not a person in this courtroom who has never told a lie, who has never done an immoral thing, and there is no man living who has never looked upon a woman without desire” (173). After they had lost the trial, Jem was very upset. He didn’t get why they had lost since they had more evidence that Tom had never even done anything.

Jem realizes the only reason his father had lost was because of how influential racism was. Another, less important way of teaching the wrongness of racism was when Jem learns about how Hitler was persecuting the Jewish population is Eastern Europe to which he told Scout. He wanted to know how someone could do something like that and they make a connection about how a similar thing was happening in Europe like it was to African Americans there.

Lastly, and most importantly, showing courage in the face of difficulties is a big life lesson Scout and Jem learn. The main way this is shown to them is how their dad took Tom Robinson’s case when no one would and how he knew they had almost no chance of winning the case. Him and his kids deal with a lot of backlash and insults from the people but they still fight their hardest for what’s right no matter what.

Another example of courage is when Mrs. Dubose makes Jem read to her. This is because as he is reading books to her she is trying to wean herself off of her Morphine addiction. This is a good example of courage because she had been on it for a long time and drugs like that, especially when taken for a long time and your body is used to it, are hard to get off and stay off of and not be addicted. Also she didn’t want to die being addicted to it so she wanted to be better before she died. Miss Maudie shows courage in front of Jem and Scout because when her house burns down she doesn’t even act afraid whatsoever. Instead, she shows she is anticipating this because now she can have a bigger garden for her flowers.

In conclusion, fighting against the system of racial prejudice, showing courage when there is danger, and not judging others based on skin color or looks, are just some of the many important examples of lessons in the novel To Kill A Mockingbird. This books life lessons and moral are still relevant and should be taught to children to this day because learning things like this are very important and should most definitely be taught to kids so they can be just like this when they grow up. This book will be taught in English classes for years to come.

Lessons in the Book "To Kill A Mockingbird". (2021, Feb 18). Retrieved from https://studymoose.com/lessons-in-the-book-to-kill-a-mockingbird-essay 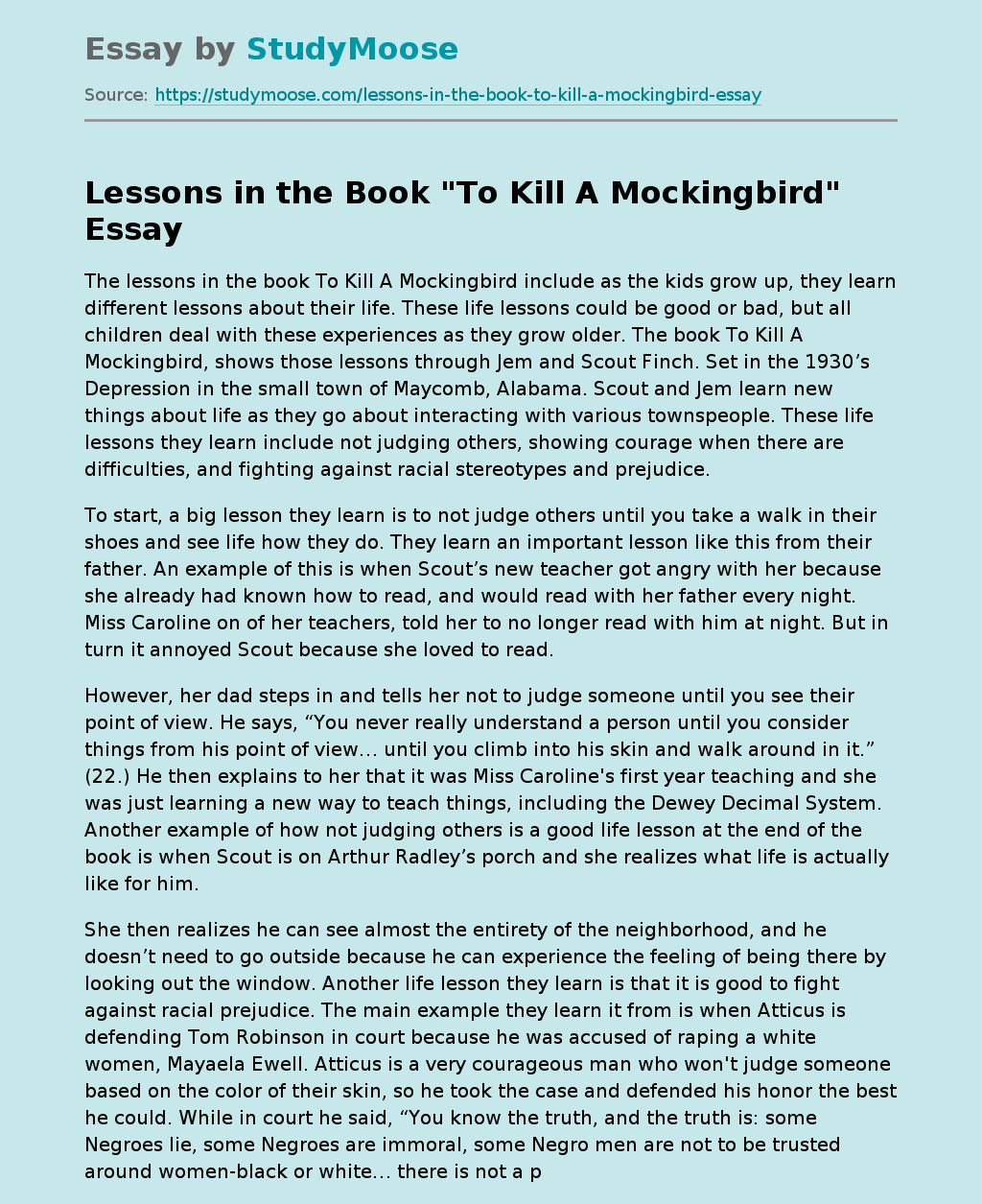