How the Moral Lessons of to Kill a Mockingbird Endure Today?

To Kill a Mockingbird by Harper Lee, a literary exploration of human morality and her essential goodness and evilness (out of a perspective of growing up)

To Kill a Mockingbird, a first person narrative published in 1960, is often described as a modern classic. It was written by Nelle Harper Lee (1926-2016), rewarding her both a Pulitzer award as well as the Presidential Medal of Freedom, the highest civilian award in the United States. In addition, the novel was declared the best fictional novel of the century by the Library Journal.

Don't use plagiarized sources. Get your custom essay on
“ How the Moral Lessons of to Kill a Mockingbird Endure Today? ”
Get custom paper
NEW! smart matching with writer

Since it was published it has become a standard piece of literature in schools across the world, influencing an uncommonly large number of people. It is famous for its way of combining and integrating humour and warmth with serious topics such as racial and social inequality, and has through its frequent use worked as a teacher of moral and integrity for many, legitimizing this, alongside any other, discussions on the book.

Proficient in: Character And Integrity

By dramatizing Scout and Jem Finch’s passage to an adult perspective, from one of childhood innocence, the novel investigates whether people are essentially, or inherently, good or evil. Early on in the novel, as a result of neither Scout nor Jem having experienced evil, they take for granted that people are good. This change naturally when, later on, they are confronted by human evil and are forced to revaluate their understanding of how the world works, and include evil as a part of it. In portraying the passage from innocence to experience in this way, the novel finds a way to expresses the danger posed to the innocent by ignorance, prejudice and hatred.

The innocent, in the book illustrated as Boo Radley Tom Robinson and, to some extent, Jem Finch, are destroyed since they are not equipped to handle these things. In the case of Jem, it is his discovery of racism and its evils during and in the aftermath of Tom Robinson’s trial and conviction. His innocently optimistic view of humanity and justice are severely scared. This can be seen when Atticus, after putting Scout to sleep, spends a considerable larger amount of time with Jem: “He would be there all night, and he would be there when Jem waked up in the morning.” (p.376) Scout’s faith in human nature, however, is intact despite the outcome of the trial.

By the end of the book, as Scout is put to bed, she tells Atticus about The Gray Ghost. The book is about a character that is wrongly accused of, and pursued for, committing a crime. However, the character’s innocence is after his capture finally revealed. As Scout explains the story to Atticus, saying that: “[…] when they finally saw him, why he hadn’t doneany of those things … Atticus, he was real nice” (p.376), he tenderly notes a truth to her observation; that “most people are […]” (p.376).

In this way, the novel ends with a faint reminder of some of its fundamental themes that have run throughout it, such as accusation, threat and innocence. By illustrating the wise moral outlook of Atticus, the reminder puts these themes to rest. If one live with understanding and sympathy, it is possible to keep one’s childhood faith in humanity, despite its capability for evil, and to believe that most people are, in Scout’s words, “real nice”.

With this, the previous danger and tension are resolved and the book ends on a note of peace and security.

How the Moral Lessons of to Kill a Mockingbird Endure Today?. (2021, Jan 29). Retrieved from https://studymoose.com/how-the-moral-lessons-of-to-kill-a-mockingbird-endure-today-essay 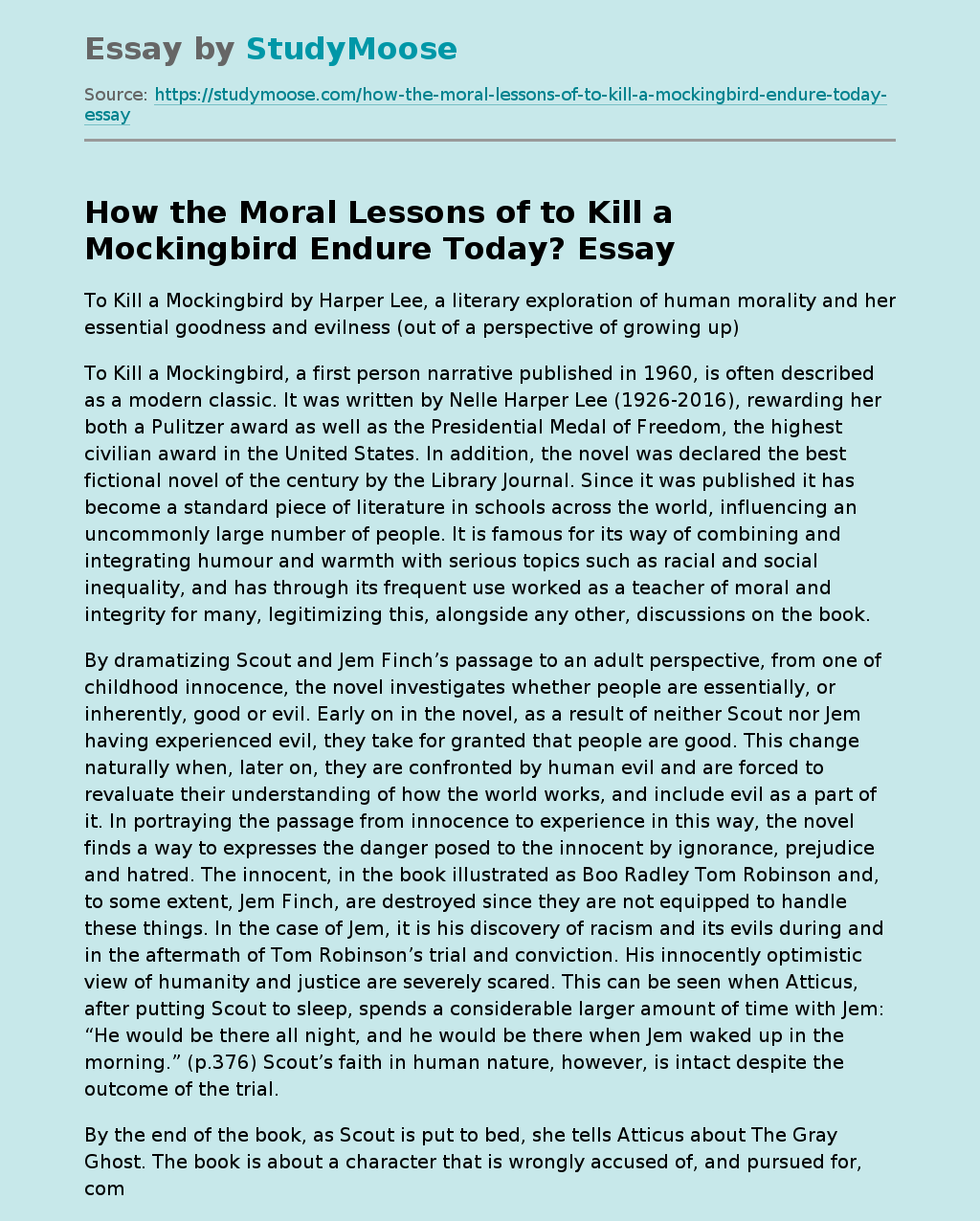