Theme Of Courage In To Kill A Mockingbird

Courage can be demonstrated in many ways ranging from the incredible, as when a superhero saves lives, to the simple, as in getting out of bed to face a difficult day. In her novel To Kill a Mockingbird Harper Lee also depicts courage in a variety of ways through her characters. The courage they show within the novel gives them strength and deepens their self-understanding as the novel goes on. Courage, the ability to take a stand and do the right thing even when it is hard, is demonstrated in To Kill a Mockingbird, in particular, through the characters of Atticus Finch, Tom Robinson, and Jem Finch.

Don't use plagiarized sources. Get your custom essay on
“ Theme Of Courage In To Kill A Mockingbird ”
Get custom paper
NEW! smart matching with writer

Atticus shows bravery in the novel because he was defending a black man although being white. Even though his own family disagreed with him taking the case, he took it anyway. The reason being due to the bias within the story. Through the examples of bravery and risk, we see how courageous Atticus was for the duration of the novel, “Real courage is when you know you’re licked before you begin, but you begin anyway and see it through no matter what”(Lee 115).

This shows the definition of Courage in Atticus’s point of view.

Secondly, Tom Robinson was a mostly silent and gentle character in the majority of the novel, however, he showed bravery in many ways. While he was in court, Tom was not scared of the jury and told the truth during his testimony. He said, “Were you scared that she would hurt you, you ran, a big buck like you?” “No Suh, I’m scared I’d be in court, just like I am now” (Lee 225).

He showed that he was courageous through testifying that Mayella, a white woman, made advances on him and tried to seduce him. He stated that he felt sorry for Mayella because nobody actually cared for her. Tom showed courage in another way by breaking out from the Enfield Prison Farm when he knew it was very dangerous. The prison guards shot him seventeen times and killed him while he was attempting to escape because he did not stop until the guards told him too.

The character Jem, displayed bravery in the novel when Bob Ewell assaulted him and his sister Scout on their way home from the Maycomb Halloween festival. When Bob Ewell attacked them, Jem yelled for Scout to run away as he fought Ewell. Jem tried his best to defend himself and his sister but instead, he ended up with a broken arm.

In To Kill a Mockingbird Harper Lee, courage was shown through the characters of Atticus Finch, Tom Robinson, and Jem. All three characters were courageous throughout the novel and especially near the end of the story. Many characters portrayed courage in this novel but it is mostly Atticus that expresses it the most.

Theme Of Courage In To Kill A Mockingbird. (2021, Jun 02). Retrieved from http://studymoose.com/theme-of-courage-in-to-kill-a-mockingbird-essay 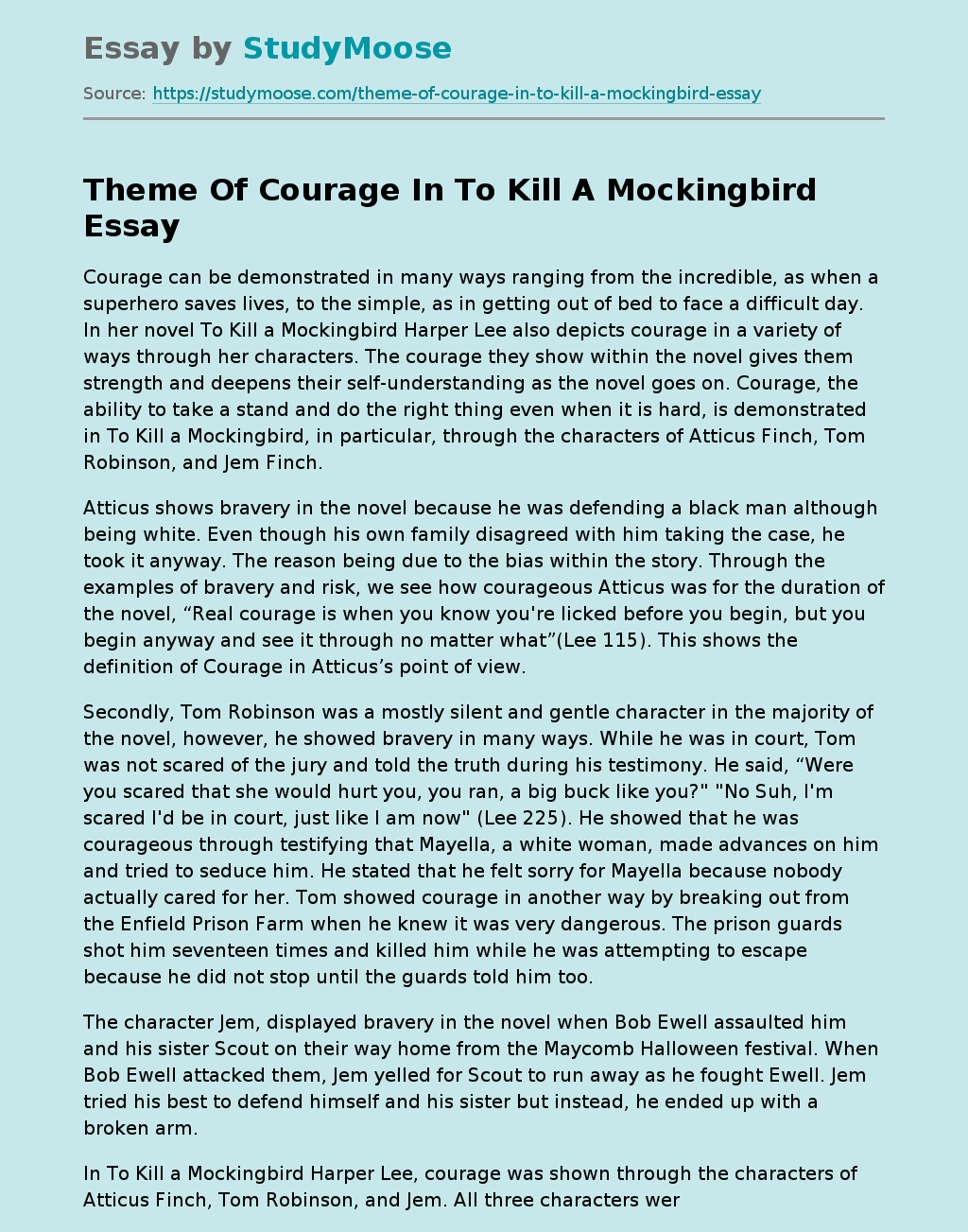