The Courage Theme in In the Time of the Butterflies

“Courage is not the absence of fear but rather the judgment that something is more important than fear; The brave may not live forever but the cautious do not live at all.”- Meg Cabot. (Goodreads). Many people make courageous decisions on a daily basis, but mostly these decisions are made in a cautious manner. Most courageous decisions are made by people looking out for themselves, and thinking before they react.

But, there are very few people who make decisions based on bravery, reacting before thinking, and fighting for what is right for themselves, as well as others.

Don't use plagiarized sources. Get your custom essay on
“ The Courage Theme in In the Time of the Butterflies ”
Get custom paper
NEW! smart matching with writer

In the Time of the Butterflies, a novel by Julia Alvarez, Minerva clearly demonstrates the most courage because she can get through any situation by fighting for what she believes in. For example, her will to stand up and go against a dictator, as well as her determination and value of courage, as well as risking her life for freedom.

In the novel, Rafael Trujillo, a dictator who does not care about anyone but himself, wants to have all of the power he possibly can.

“He yanks me by the wrist, thrusting his pelvis at me in a vulgar way, and I can see my hand in an endless slow-motion rise—a mind all its own—and come down on the astonished, made-up face.

(Alvarez, 100). This shows how courageous Minerva is by her slapping the dictator. When something is wrong, Minerva reacts before she thinks. Therefore, her ability to make courageous decisions in a quick manner is what sets her apart from the other three Mirabal sisters. Another moment when Minerva shows courage against Trujillo was when she portrays Trujillo as disgusting while looking at their textbooks at the convent. Minerva, as well as the others at the convent, looked in horror as they looked at their textbooks.

“When we got to school that fall, we were issued new history textbooks with a picture of you-know-who embossed on the cover so even a blind person could tell who the lies were about… It was pretty disgusting.” (24) This quote shows how Trujillo wants the people to see him as the Lord and Savior. He wants to portray the message that they have always needed him to rule their country. Therefore, demonstrating how Minerva is courageous and fights for what she believes in.

When things are difficult, Minerva is courageous in how she fights for what she believes in. When Being as courageous as she is, she wants a voice in government. But, she is very fed up with how the government is currently. “But Minerva won’t have it. She says this country hasn’t voted for anything in twenty-six years and it’s only these silly little elections that keep the faint memory of democracy going. You can’t let your constituency down, Queen Mate.” (136) In this quote, it is explaining how she is fed up with how her country has not voted for anything and wants a democracy that will respect people’s rights. Also, she wants people to have a voice and make decisions for themselves.

Therefore, Minerva is courageous because she tries to do what is right by wanting to have an active voice in government. However, it is not only Minerva being courageous, the other three Mirabal sisters have this trait also. But, what sets Minerva above the rest is her ability to acknowledge her other siblings for their courage. “She seemed pretty impressed with my arguing back at her like that. She’s always telling me to stand up for myself, but I guess she did not figure I would stand up to her.” (38) This shows that one of the things that Minerva values most is courage, and is impressed that her sister is showing that courage by standing up to her and wondering where she has been sneaking out. For that reason, her value of courage stands her apart from the other three Mirabal sisters.

Finally, Minerva is courageous by risking her life for freedom. Not a lot of people did this at the time. For example, she wants to be independent over the secret police and revolts against the Ogo de Agua. In order to do this, she has to risk her life. She makes this decision because she wants to have more choices than what Ojo de Agua has to offer.

But, Dede, one of the four Mirabal sisters, is starting to give in to her fears. “But Minerva acted unconcerned about her safety. She could not desert the cause, she’d argue with Dede, and she would not stay holed up in Ojo de Agua and let the SIM kill her spirit. Besides, Dede was giving in to her exaggerated fears.” (199) This shows her revolt against the Ojo de Agua, and how she wants to escape for freedom. Also, this shows that the other Mirabal sisters are giving in to their fears, while Minerva is not making her the most courageous. Therefore, by her revolting against the city she has always known, she shows her courageous side.

One of the reasons she wanted to escape was for a better future, which Alvarez foreshadows to in the beginning of the novel. Not only does she want to escape and have a better life, but also wants her sisters to have a better life, which shows how much she loves her sisters. “I asked Minerva why she was doing such a dangerous thing. And then, she said the strangest thing. She wanted me to grow up in a free country.” (39) This shows that Minerva’s courage is something that she fights for and values every day. Also, the courage to live in a free country gives her the courage to do dangerous things, even though they are all highly illegal. Therefore, her courage to do highly illegal things is what sets her apart from the other three Mirabal sisters.

In conclusion, the ways in which Minerva is courageous are shown through her standing up to Trujillo, her determination to do the right thing when things are difficult, as well as risking her life for freedom. Her courage to make these decisions is quite remarkable. Therefore, without Minerva’s courage, the book would not be what it is because the three Mirabal sisters did not have as much courage as she did.

The Courage Theme in In the Time of the Butterflies. (2021, Dec 05). Retrieved from https://studymoose.com/the-courage-theme-in-in-the-time-of-the-butterflies-essay 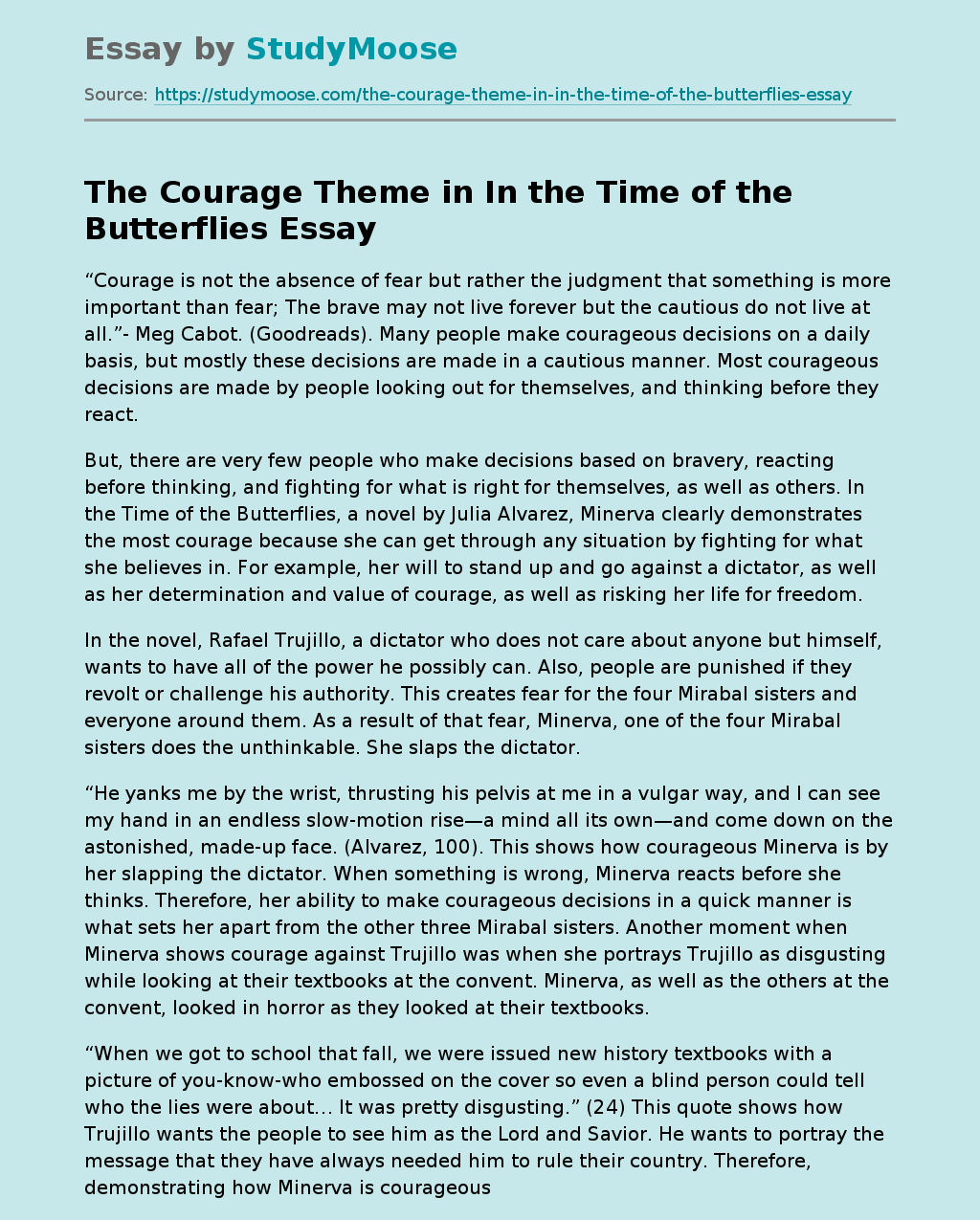