To Kill a Mockingbird is a classic novel about a young girl, her brother, a close friend their adventures in finding Boo Radley, and growing up in a prejudiced society. The book’s main character, Jeane-Louise Finch, nicknamed Scout, is shown how cruel and unfair the world can be, especially southern Alabama during the Great Depression. The reader is given a very good idea of how difficult courage was to come by at this time. To Kill a Mockingbird portrays great courage, for example Scout, her father Atticus, or Ms.

Don't use plagiarized sources. Get your custom essay on
“ To Kill a Mockingbird by Harper Lee: Interpretive Essay ”
Get custom paper
NEW! smart matching with writer

Dubose in her time of peril. In all of these stories rolled up in this book that kept me reading the classic novel, although reading is not my favorite pastime, this book was a very satisfying read. I would say that To Kill a Mockingbird is a very good read for anyone who is looking for inspiration or is looking for a strong story. Lee depicts family values shining through in the darkest of times, and the many intertwined stories create a memorable novel.

Atticus Finch is a courageous person because he does what he believes is right, and does not follow Maycomb’s racist ways. Defending Tom Robinson, an African-American man accused of raping a white woman, proves Atticus’s integrity. His children, Scout and Jem, feel the repercussions of their father’s actions in defending Tom Robinson.

As she said, “But Mrs. Dubose held us: “Not only a Finch waiting tables, but one in the courthouse lawing for the blacks’ your father’s no better than the blacks and trash he works for.

” Atticus stays strong and does what is truly right despite the publics’ beliefs. Mrs. Dubose is a good model of courage because she recognizes she has a flaw and that she has to fix. She is addicted to morphine and makes a goal to die free of her weakness. She goes through a time of withdrawal that is difficult to survive. As she says again, “Her head moved slowly from side to side. From time to time she would open her mouth wide, and I could see her tongue undulate faintly. Cords of saliva would collect on her lips; she would draw them in, than open her mouth again. Her mouth seemed to have a private existence of its own. She achieves her goal before she dies, although she takes help from Jem reading to her every Saturday as a way of distracting her. It requires still takes a great amount of self-confidence to be able to recognize that one has a flaw and even more to do something about it.

Boo Radley is an interesting character. Because he has been shunned away from the public, it takes a lot of courage for him to come out of his house, and to save Scout’s life is an even bigger task. He saves her life, and while doing so he is scared, yet he refuses to run away once he knows she is safe. “When I pointed to him his palms slipped slightly, leaving greasy sweat streaks on the wall, and he hooked his thumbs in his belt. A strange spasm shook him, as if he heard fingernails scrape a slate, but as I gazed at him in wonder the tension slowly drained from is face. His lips parted into a timid smile, and our neighbor’s image blurred with my sudden tears.” He is courageous when he is needed, although he does not like being around other people. Harper Lee shows bravery in all three characters in her book, showing courage in each of them. Lee also shows us with the trial of Tom Robinson that racism shall not be forgotten and with the help of people like Atticus who show courage by standing up for what is right, we will live in a better world.

To Kill a Mockingbird by Harper Lee: Interpretive Essay. (2016, Mar 14). Retrieved from http://studymoose.com/to-kill-a-mockingbird-by-harper-lee-interpretive-essay 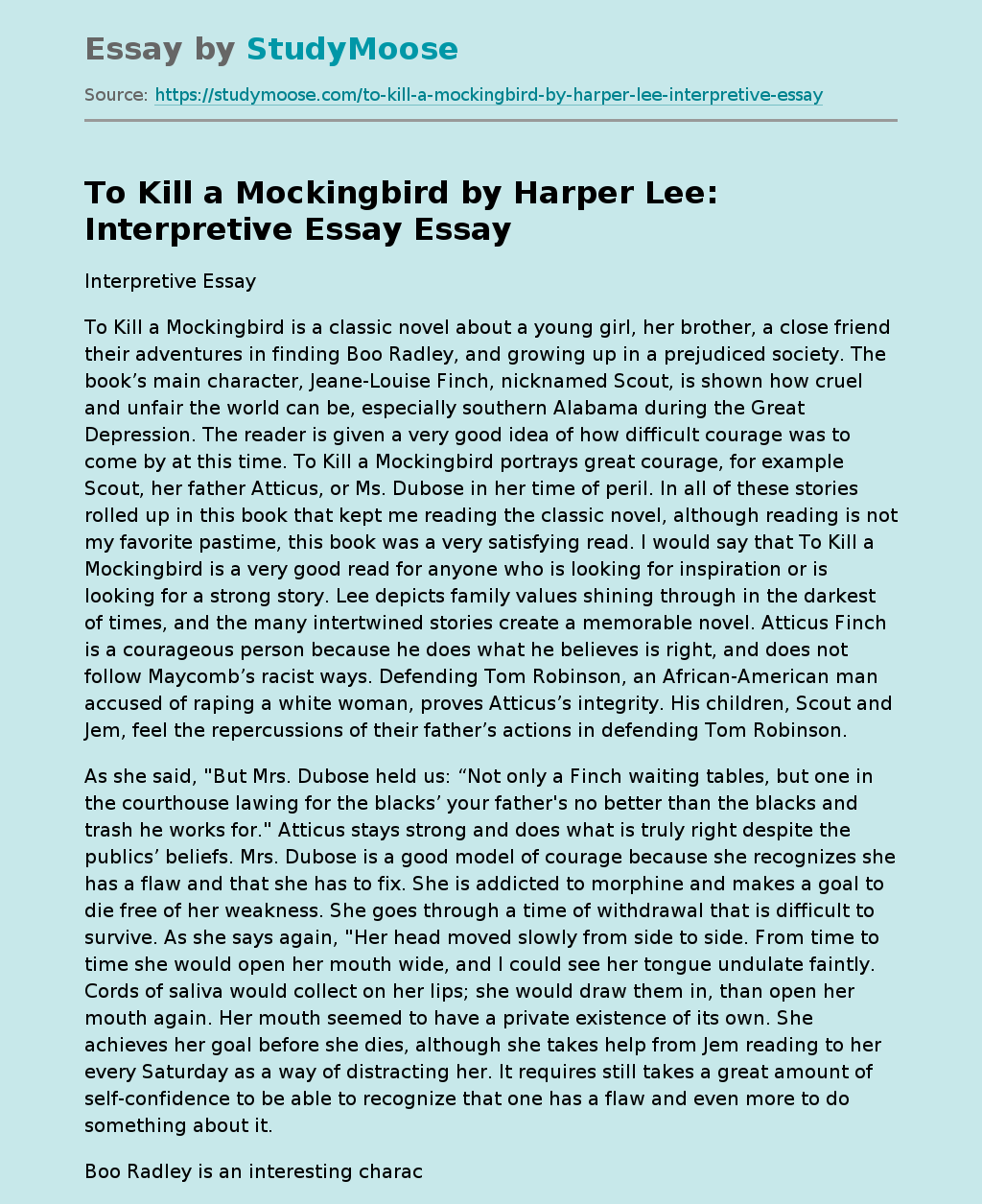