You Can't Judge A Book By Its Cover

Have you ever heard the saying “don’t judge a book by its cover”? I have, and it’s an absolutely true statement. A little history behind this saying begins when I was a young child. Living on a little country island isolated from the spotlight of our country cause controversy between the people. There were stigma and stereotype that kids who lived in the countryside were not as smart as those who lived within the country spotlighted city. That spotlight city was called Georgetown.

Don't use plagiarized sources. Get your custom essay on
“ You Can’t Judge A Book By Its Cover ”
Get custom paper
NEW! smart matching with writer

Georgetown was the place where rich people did most of their businesses, they had more money and therefore they can afford to send their children to private schools. Kids, like my brothers and I, didn’t have much. We didn’t drive the most expensive cars nor were we allowed weekly allowances. We commute to school via bicycles and we took our lunch to school every day because we couldn’t afford to buy food. However, even though, we didn’t have much I would say the kids on the island had a well-spent childhood.

In town, as my family say, they lived the “high life”, they had maids, their foods were cook every day and they had money. When my family and I would visit our aunt, we would have the best time, we would get whatever we want.

During that stay at my aunt’s home, there was a competition going on that invited all students from around the country. My brother, cousin, and I went just to watch the competition but when we got there, we observed bullying against people who came from the country. My family is a little lighter in skin color than most of the kids from the country, but we all know that our hearts belong to the countryside. Students from the island were brown in skin color while most kids from the city were white. So, when my brother saw that one of his friends was being bullied by a snobby rich kid my brother stepped in and challenged him in the math section of the competition. However, when my brother stepped up to play, many students in the audience started booing my brother because he was sticking up for his own and he stood up against racism. They all believed that he was trying to play a hero, but they didn’t know that we were country people. On the other hand, I felt ashamed. However, I knew that he could win the competition because no one knew at the time, but my brother got the highest grade in the behind door’s math competition within the whole country. The first few questions people started booing him his opponent buzzed in quicker than him. Soon after the 6th question my brother was on fire. He practically answered all the questions getting most of them correct, while the guy who was bullying his friend personally apologized and invited us to lunch, which was denied, after the game.

As my mother always say: “you should never judge the value of a person or thing simply by its appearance but by who they are as a person”. The first reason why you shouldn’t judge is that you never know what that person can do or become. It’s never good to judge someone or something before you find out facts about them or the context of the situation as which they are in. Another reason why it is not good is that prejudging can stir up confusion. Someone may be in a situation and during that time there they may be viewed to be in the wrong. But, in actuality, they may not even be wrong. Additionally, it’s never good to prejudge, is because you wouldn’t want people to underestimate you so you shouldn’t try to do it to anyone else. You never know what a person can do or become. Some people can grow up in the worst neighborhoods and find themselves being doctors, judges, or even mayors. You never know the outcome of a person until you see the outcome.

Prejudging can stir up a lot of confusion. Some individuals judge others on the color of their skin. In the past, blacks were judged to be inferior to white just because of their skin color. Some police officers assume certain guys are bad because of their attire. They see a male individual dressed in baggy jeans, or sagging pants, with caps on, they’re up to something. It’s a stereotype. If that is the way they choose to appear, then it shouldn’t be of importance. We are who we are, no one should tell you how to live your life, act, speak, or believe because that’s the right thing to do. If my brother hadn’t stood up for his friend that rich guy would have gone on to do that to other kids.

You Can't Judge A Book By Its Cover. (2020, Sep 13). Retrieved from http://studymoose.com/you-cant-judge-a-book-by-its-cover-essay 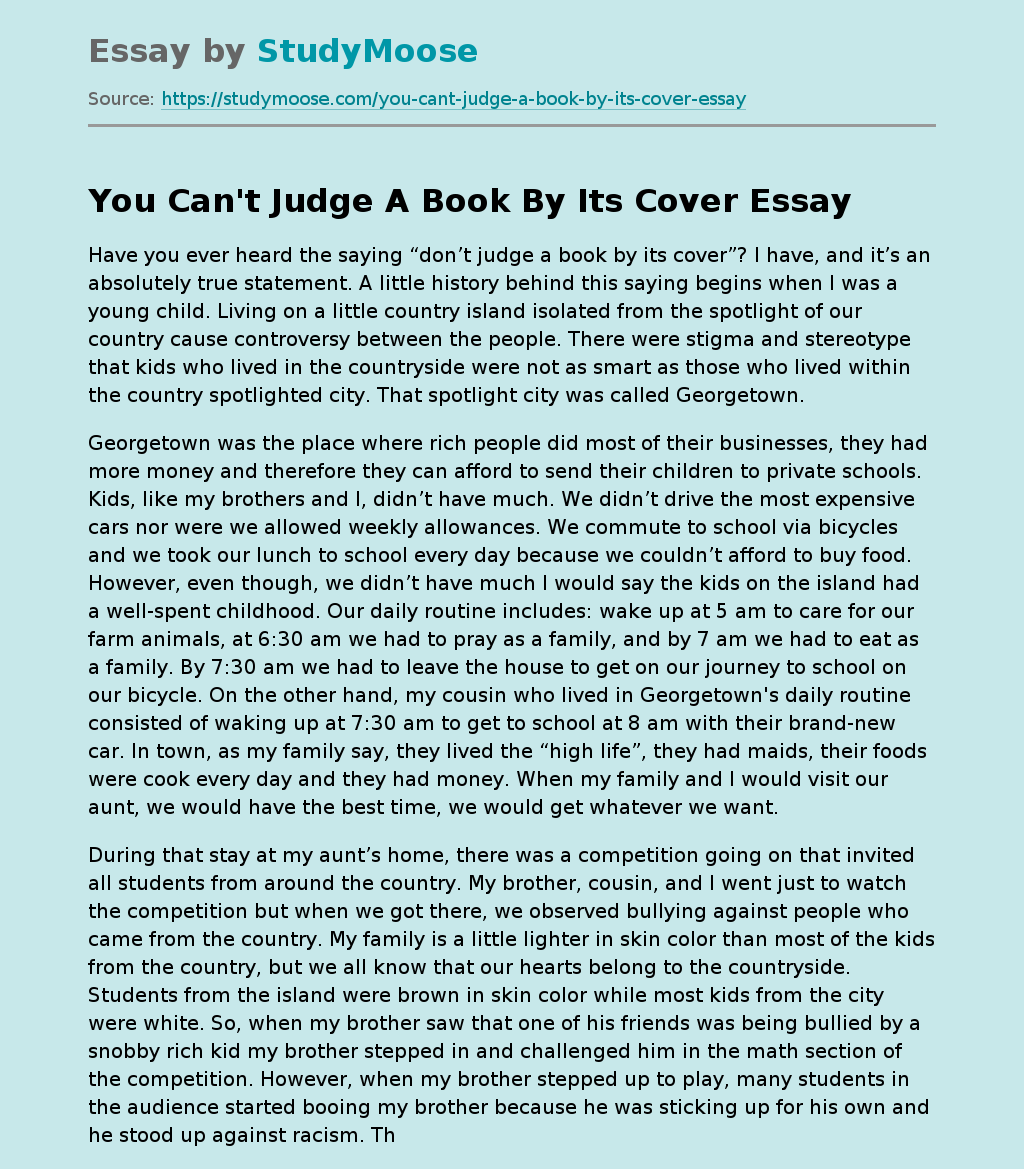