Both texts, William Shakespeare’s Macbeth and Shakespeare retold: Macbeth directed by Mark Brozel contains parallel themes and subtle differences in concerning matters like purpose, context and language. Both texts thoroughly explore Macbeths unlawful rise to power and his inevitable downfall. With power he becomes corrupt, a bloodthirsty tyrant and a victim of his own success and the use of imagery, language and stagecraft in the play infuse to create malevolent and malicious image of Macbeth. With the ideas of manipulation and ambition, he becomes ruthless, and his vision is fogged with ambition.

Don't use plagiarized sources. Get your custom essay on
“ Comparative Essay – Macbeth ”
Get custom paper
NEW! smart matching with writer

This idea of ambition ultimately determines the fate of the texts characters.

The statement “power is the catalyst for corruption” is clearly suitable for Shakespeare’s Macbeth. In act one scene 3, Macbeth meets the three witches; from this moment in the play onwards, Macbeth has an insatiable lust for power. The supernatural element of the use of witches to expose the Macbeth and Banquo’s prophecies builds on the idea of darkness and supernatural both representing the imagery of evil.

The witches reveal to Macbeth he will become “thane of glamis”, “thane of Cawdor” and the last shocks him the most “all hail Macbeth, that shalt be king hereafter”. Banquo was also revealed a prophecy that he will be “not so happy, yet much happier” and “thou shalt get kings, though thou be none”.

Banquo continues to warn Macbeth “oftentimes to win us to our harm, the instruments of darkness tell us truths.” This demonstrating Banquo’s lack of ambition as he takes no more thought about the prophecies revealed.

Although for Macbeth, develop an indecisive mind, conflicting against his conscience. Macbeth reveals “I have no spur to prick the sides of my intent, but only vaulting ambition” revealing that he cannot spur himself into action, but his only motive for murdering the king is his‘ vaulting ambition’ to have the prophecy true. Macbeth’s ambition fuels his thirst for power.

Similarly in the Shakespeare Macbeth Retold, the exploration of supernatural themes is revealed through the three garbage collectors who reveal similar prophecy’s to Joe that the restaurant will have 3 michellen stars and that the restaurant will become his. The supernatural and imagery of evil are portrayed through the film through the use of low lighting and mysterious sound effects foreshadowing evil and mysterious elements. Like the play the garbage men’s prophecies ignite Joe’s ambition to take over the restaurant and have him recognized as head chef. Although Billy, resembling the character of Banquo, explains to Joe “it doesn’t matter that no one knows it’s us, we no, that’s all that matters” this revealing billy to be a much more simple, honest and harmless character, who unlike Macbeth and his wife did not challenge his own fate, therefore did not corrupt himself. He did not allow other forces to interrupt his ambitions, leaving the characters of Billy and Banquo to determine their own fate. Therefore proving that the ambitions of these characters throughout both texts, has an effect of whether they become corrupt or not.

Furthermore another theme thoroughly explored hand in hand with ambition is that of manipulation causing the possibility of corruption. Throughout the play, Lady Macbeth’s manipulation is demonstrated through Shakespeare’s use of antithesis, where something such as Lady Macbeth’s innocent baby is compared to a murderous deed. The use of antithesis highlights the extremities and persuades Macbeth into the foolish act of murdering the King. Although in the Shakespeare Retold, although Ella is seen manipulating Joe into the crime claiming, “you do this and we win everything”, her demise is clearly represented through the use of symbolism in the film. Ella’s earlier acts of manipulation were fuelled by her ambition for Joe to run the restaurant. Although after the crime has been perpetrated, she begins a slow slide into madness. In various scenes she is seen to be vigorously scrubbing her hands clean. Symbolic of her regret as she tries to escape the reality of her actions. Her sensitivity becomes a weakness, and she is unable to cope. Signaling her total inability to deal with the legacy of their crimes, and the film shows her jumping from the restaurant rooftop, proving her corruption.

Another example of manipulation also comes from theme of the supernatural in the garbage collectors who assured Joe a sense of security proclaiming, “Pigs will fly before anything happens to you”, eluding Joe to the belief that he was untouchable. His first signs of corruption are represented in the kitchen where he becomes angry and demonstrates qualities of insanity, yelling at fellow chefs reminding them “whose the head chef here?” “I run this kitchen, mine is the only voice”. This demonstrating Joe’s new use of power.

Similarly in the play the three witches return to Macbeth, with three apparitions. The first warning him of Macduff, the second, reassures his power, and the third explains he shall never be vanquished until Birham wood comes upon Dunsinane. The witches for a second time had manipulated Macbeth into believing he to be invincible and that no body can harm him. Thus causing Macbeth to view people merely as removable objects in his ultimate conquest for victory, as he continues to murder his best friend Banquo and Macduff’s family. This proving that Macbeth being crowned king, has caused him to become even more bloodthirsty and is able to dispose of people without consulting lady Macbeth, proving his corruption leading to his eventual death.

In conclusion, throughout both texts, the characters ambitions ignite there crave for power. For the characters of Macbeth and Lady Macbeth, it is obvious by their actions that they became blinded by their ambition for power and authority, leaving them corrupt. Therefore proving power to be a catalyst for corruption. 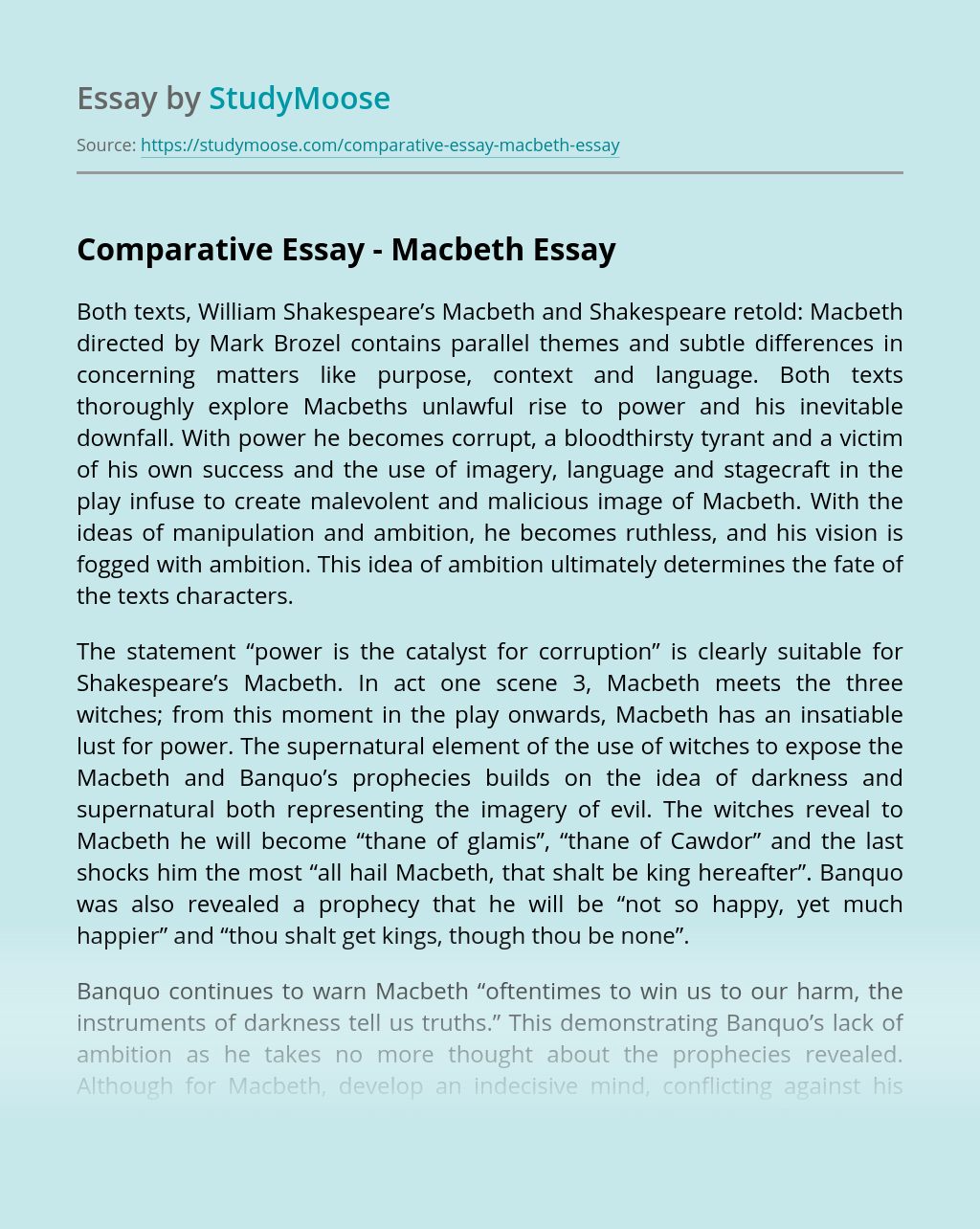