﻿Causes and Effects of Earthquakes Essay

There are some programs, like the ones that are broadcast at National Geographic Channel, where professionals show us on many opportunities documentaries about earthquakes and the amount of damage that they had produced in some areas. But… what is an earthquake? We can define them as the shaking of the Earth’s surface caused by the rapid movement of the Earth’s rocky outer layer. In addition, earthquakes results from two main factors and can have two harmful effects.

There are two main causes of seismic tremors.

Don't use plagiarized sources.
Get Your Custom Essay on ﻿Causes and Effects of Earthquakes Just from $13,9/Page

One of them is fault rupture. The faults slip because of movement of the Earth’s tectonic plates. Because of the pressure within the crust increases slowly over hundreds of years and finally exceed the strength of the plates, earthquakes take place. Human activities can also be the cause of significant earthquakes. Human beings carried out many activities that increase stress in the earth’s crust which lead to earthquakes. For example, injecting fluid into deep wells for waste disposal, filling reservoirs and firing underground nuclear test blasts.

Earthquakes can mainly have two dreadful effects. First, one direct effect of earthquakes is ground shaking and landslides. The earthquake’s waves make the ground move, shaking buildings and causing weaker structures to collapse. The damage of properties can lead to secondary effects such as fire, which is produced because of the rupture of natural gas mains and water lines. Second, other post-earthquake threats are tsunamis. In many cases, the slip fault is located beneath the sea which can produce tsunamis. Tidal waves wash ashore and water moves inland, causing severe flooding, the loss of lives due to drowning and damage to property.

To conclude, there are two main reasons as well as consequences of earthquakes. Although we can prevent earthquakes, there are some measures we can take to reduce the damage that they caused. I think that it is important to be concerned about this topic because we never know whether we can be victims of an earthquake.

﻿Causes and Effects of Earthquakes. (2016, May 08). Retrieved from https://studymoose.com/causes-and-effects-of-earthquakes-essay 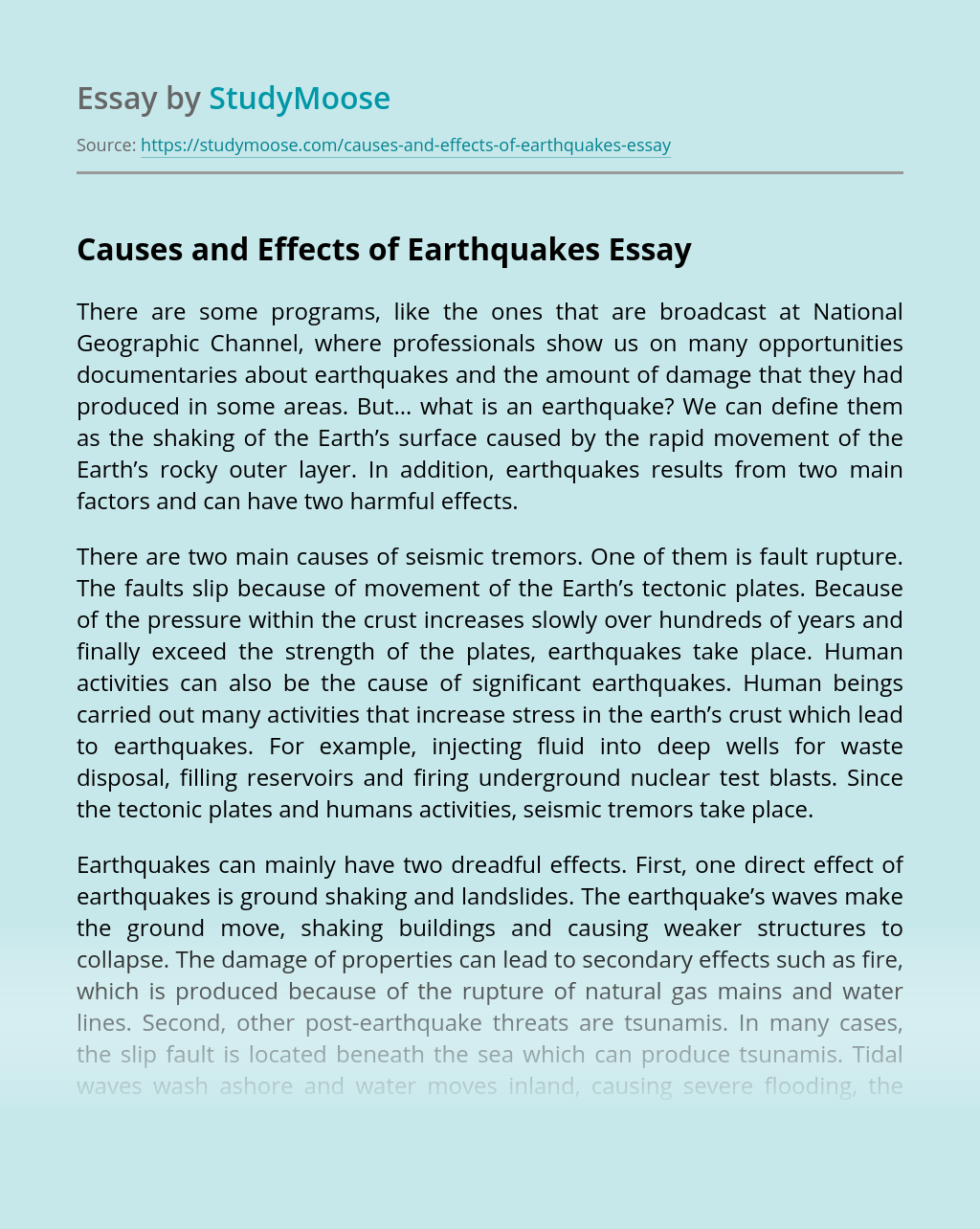