Outline the causes of any 2 different types of hazards

A hurricane and tropical storms are cyclones. When the winds reach a constant speed of 74 miles per hour or more, it is called a hurricane.

A hurricane is caused when a large mass of air is warmed up and the warm humid air begins to rise. As the air rises, it cools and condenses to cloud and rain. They are tropical storms. The hurricanes winds blow in a large spiral around a calm centre called the ‘eye’. The eye is usually 20-30 miles wide and the storm itself may have a diameter of 400 miles. As a hurricane approaches, the skies begin to darken and the winds grow stronger.

They sink beneath each other, or spread apart from each other (like the Mid-Atlantic Ridge). At such places the motion becomes less smooth – the plates are stuck together at the edges but the rest of each plate is continuing to move, so the rocks along the edges are distorted. As the motion continues, the strain builds up to the point where the rock can not stand any more bending. With a lurch, the rock breaks and the two sides move. An earthquake is the shaking that radiates out from the breaking rock.

For one of the hazard types, illustrate the problem which it causes for societies in MEDC’s and LEDC’s

MEDC’s are able to respond to hurricanes quickly and with they supplies that are needed as they have and the money to fund the resources needed. They also have the money to research hurricanes so they know what to do to reduce the impact of them as well as being able to predict where and when they will hit. MEDC’s also have government backing and funding so they are able to research and monitor hurricanes so that they are able to reduce the damage they cause. The government also help to fund the training of personal so that they can help people in areas that have been hit by hurricanes. This makes it easier to rescue people quickly without inflicting injuries to themselves.

For example, if there weren’t any trained personal then when hurricane Katrina struck New Orleans, people that were caught in the floods wouldn’t have been rescued quickly and safely. The fact that people were aware that hurricane Katrina was going to hit the region of New Orleans, made it possible for people to survive it as they were able to leave the area and go somewhere safe so that they wouldn’t get caught in the hurricane. In MEDC’s more people know about hurricanes so they know what to do, before, during and after them. This means that they are able to respond to them in the right way so that they can survive through them and they can help others survive through them too.

Hurricanes also occur in LEDC’s. As LEDC’s do not have as much money or as much knowledge or do not have buildings that are constructed so that they can survive a hurricane, they are affected badly. This means that a hurricane can cause the region that it hits a lot of damage, causing a lot of deaths as well as a break down in communication to other regions and making it hard for aid to reach the region. In most LEDC, the government does not provide funding into the research or equipment they need in order to monitor hurricanes so that they can predict where and when they are likely to hit and so that know how to react when a hurricane hits. The government in LEDC’s may not provide funding as they have economic pressures, for example they may have to repay loans, meaning they do not have the money to fund research into hurricanes. Although LEDC’s do not have the resources they need to respond to a hurricane, they are offered aid from other countries.

This means that they are helped by other countries, however aid takes time to reach the regions meaning people that did survive the hurricane, could die waiting for aid. If the infrastructure in the region is not built to survive a hurricane, it could mean that aid is not able to reach the region as the roads leading to the region may be blocked. For example when hurricane Stan hit Guatemala, mudslides made it difficult for aid to reach areas of the country as there was no access as roads leading into the areas were blocked or bridges were destroyed. If the bridges had been built to survive a hurricane, aid would be able to get to the areas sooner and save lives as they would be able to reach people in time. 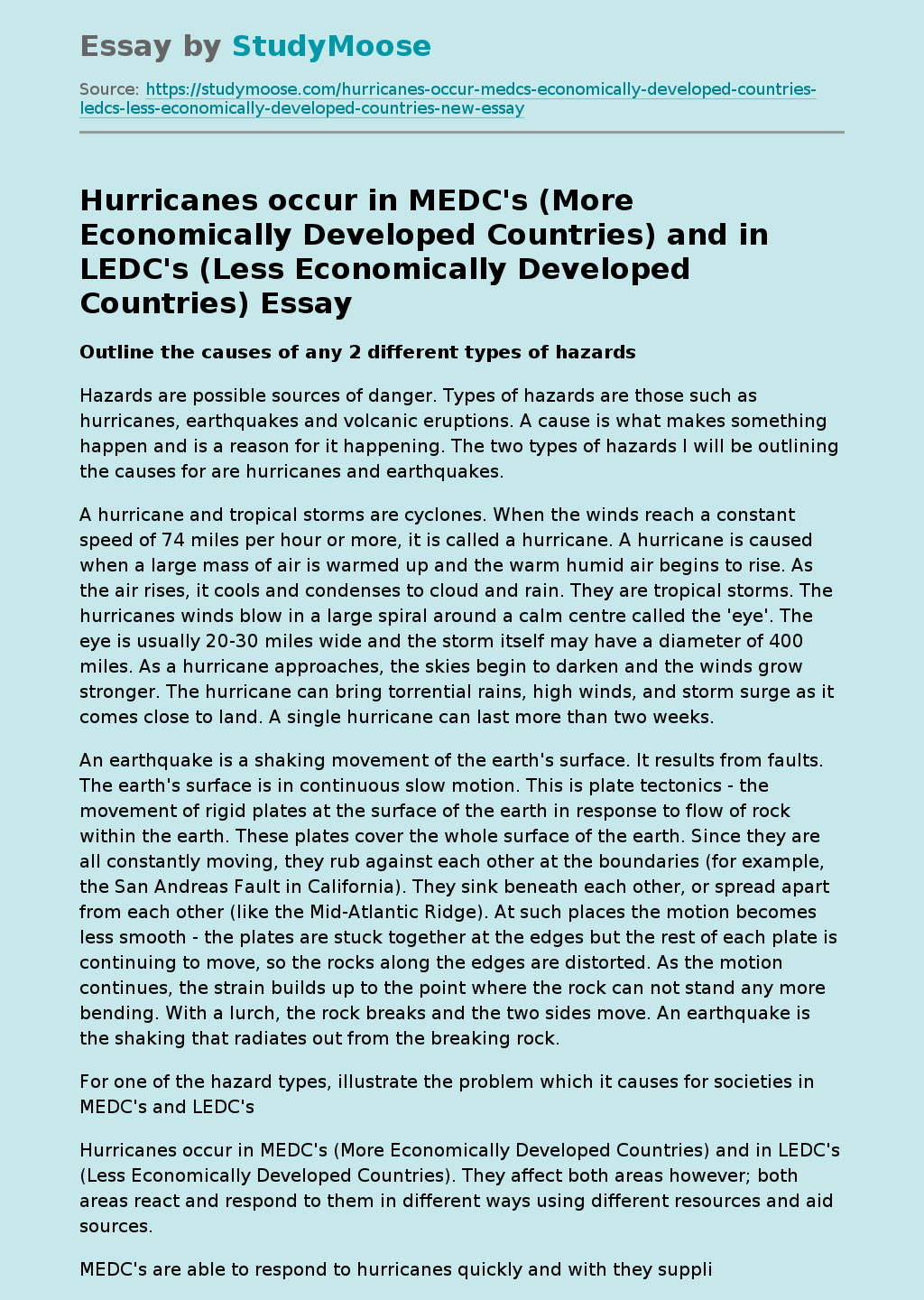