There is little to no wind and there is no dangerous of destruction in the eye of the storm. Recovery from either storm can vary based on how bad the storm was. Repair for both can range from small exterior tasks to actually having to rebuild an entire house or business. Most people believe that hurricanes are far more dangerous than tornadoes. This is usually do to the fact that hurricanes often get more time on the news.

A major difference between hurricanes and tornadoes is that hurricanes have a much wider diameter than tornadoes. People affected by a hurricane will not be able to step outside of the hurricane and view it. People who are affected by a tornado can see the entire tornado come and go. Hurricanes are tracked, sometimes for months. allowing for a great deal of time to prepare for a hurricane.

Tornadoes happen very suddenly and with little time most people who are victims of tornadoes can do very little to protect themselves from it. Not only the size of the storms differ but also the appearance. Hurricanes are most often described as wet wind. Hurricanes are seen as clear or transparent. This contrasts striklying with the appearance of a tornado. A tornado is a dark funnel shaped cloud which is not wet but dirty. Tornadoes are dirty because as they develop and move over land they pick up dirt and trash from the ground which gets incorporated into the cloud. Hurricanes and tornadoes occur in different places.

Hurricanes develop over the Caribbean Sea and move upwards and hit land some where over the Gulf of Mexico. On average 10 hurricanes form every year. Many of these hurricanes develop but never hit land. However, when a hurricane does touch down it usually effects the states along the southern coastline in America. Whereas tornadoes occur east of the Rocky Mountains. Effecting the areas in the mid-west, great plains, and prairie states. Approximately, 800 tornadoes develop each year in the United States. Additionally, hurricanes usually develop between July and October.

Tornadoes develop in the summer months only. Location plays an important role in the type of damage that each storm causes. Hurricanes occur in places near the oceans. This is why hurricanes cause floods, and heavy rains in addition to high winds. Tornadoes occur in places that are flat. Allowing a low pressure storm to turn into a tunnel of wind which then becomes a tornado. Tornadoes are usually not accompanied by other bad weather. Once a tornado passes, the weather quickly returns to normal. Once a hurricane passes rain, and high wind weather can last for days.

Hurricanes exclusively only effect land that is next to the ocean while tornadoes usually stay in the middle states have been known to hit in the south in the winter months. This is irregular but not impossible. Tornadoes and hurricanes cause millions of dollars of damage in the United States every year. Currently, the scientific community knows much more about both storms than 10 years ago. However, no amount of knowledge can prevent the destruction that each storm creates. Hurricanes and tornadoes are similar in the destruction they cause, and the repair that is needed after each storm.

The terms hurricane and tornado are often used interchangeably by people which is incorrect. There are several misconceptions about hurricanes and tornadoes. Hurricanes are often seen a the more violent and destructive of the two storms. Unexpectedly, tornadoes are actually far worse than hurricanes. Hurricanes and tornadoes also differ in a number of ways. They occur in different places, look different, and cause differ weather effects. These storms are unstoppable. They can not be ignored or avoided – only endured with the hope and faith that everyone survives to see the next one. 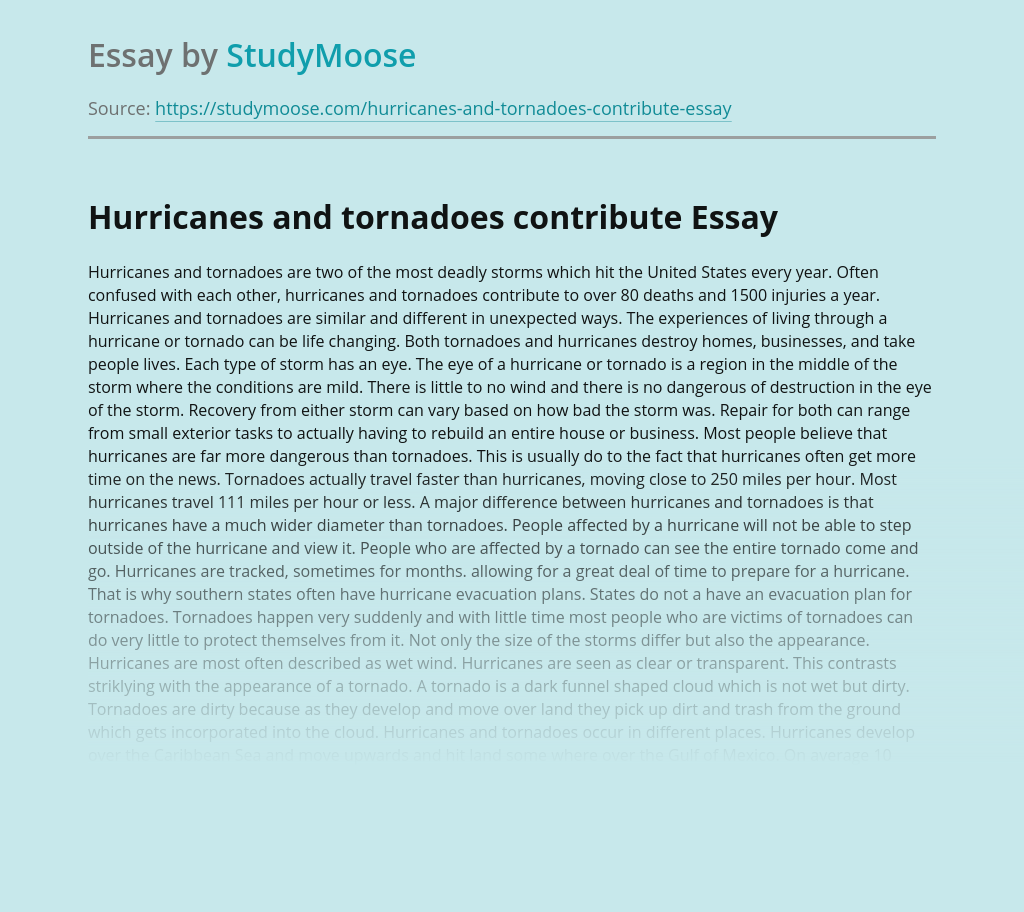 Don’t waste time
Get a verified writer to help you with Hurricanes and tornadoes contribute
Hire verified writer
$35.80 for a 2-page paper
Stay Safe, Stay Original