Plan of Disaster Prevention and Mitigation

My hometown is Yaan, Sichuan Province. It is a small city on the southwest of China. Since it is close to a seismic fault line and surrounded by many mountains,disasters such as earthquakes and landslides occur occasionally in my hometown. In my memory, earthquakes are one of the most serious disasters to my home town. We suffered the Wenchuan earthquake in 2008 and the Yaan earthquake where the source is exactly in Yaan in 2013. Many buildings in the rural area were destroyed and many people got injured and even died in these disasters.

Don't use plagiarized sources. Get your custom essay on
“ Plan of Disaster Prevention and Mitigation???118010910037My ”
Get custom paper
NEW! smart matching with writer

Earthquakes, big or small, happen from time to time and result in immense economic losses and casualties.What’s more, various geological disasters like landslides and debris flow are common in Yaan as well. Every July and August in the summer, it rains a lot and induces landslides and debris flows in the mountainous region. Roads are blocked up. Structures including buildings, bridges and highways are damaged.

In conclusion, my hometown often suffers from different geological disasters due to the seismic fault line, its mountain terrain and seasonal heavy rainfall.

It is really of great importance for my hometown to prevent and mitigate such disasters immediately.ThereforeI would propose measures in both the technical and non-technical aspects.

Firstly, from the technical aspect, the followings can be adopted:

Under normal circumstances, water is one of the most important factors that cause landslides, regardless of man-made damage, and it has a very close relationship with the occurrence of landslides.If we can eliminate the effect of water on the slope and further prevent the occurrence of landslides. Specific measures are as follows: 1) Surface water outside the landslide area should be controlled to avoid its inflow into the landslide area, and water interception ditches can be built at the boundary to intercept the surface water; 2) Drainage ditches should be built in the landslide area to eliminate the surface water in the area and reduce its threat to the slope; 3) Vertical hole drainage can be used. The selection of specific methods can be determined according to the geological structure characteristics and hydrological conditions of the slope.

3.Slope protection should be reinforced especially the dangerous ones. There are many ways to protect the slope surface like shotcreting, planting trees, and building other supporting structures and so on. Many slopes in my hometown lack protection, so I think this may help prevent some small landslides and debris flows.

4. Current seismic design code should be popularized to those who build their houses by themselves. In recent earthquakes self-built houses in the rural area tended to be more vulnerable mainly because they rarely refer to the current seismic design code. And the quality cannot be guaranteed well. Sohelping rebuilding the low-quality houses can prevent unnecessary casualties in these areas. When designing structures, the anti- seismic intensity can be appropriately raised for earthquake stricken areas.

5. Monitor web and monitor positions should be established more widely. The “5.12” Wenchuan earthquake and the “4·20” Lushan earthquake have formed a large number of hidden dangers of geological disasters. They are easily triggered under adverse conditions such as heavy rainfall and human engineering activities, directly threatening the lives and have serious impacts of the people in my hometown. To mountainous regions it is useful to real-time monitorhidden dangers including displacement monitoring, rainfall monitoring, mud level monitoring, flow and crack monitoring because this will help issue early warning information before the disaster occurs, to ensure the personal safety of the people in the danger zone and to guide them evacuate safe. Evacuating inhabitants seems to be more important especially when unpreventable disasters happen.

Secondly, from the non-technical aspect, the followings can be adopted:

1. For places where geological hazards occur frequently and dangerous areas which are not conducive to habitation, local residents should be relocated. This in being done in my hometown, and resettlement sites have been set up in all districts and counties to resettle those seriously affected residents. In the next ten years, the government should actively investigate dangerous spots and let the residents there move to a safer place.

2. Propaganda is necessary in the daily life. For one thing, lectures about geological disasters should be held regularly to spread relevant knowledge to the local people. Let them know what it is and what they can do to save their lives if it occurs. It is also recommended that they take part in monitoring their living environment. make sure that they know how to contact the local government as soon as possible they notice some forewarning. For another, Actively organize and carry out propaganda and training exercises, laying stress on the exercises of taking the initiative to avoid and facing disasters, so that the masses are familiar with the evacuation signals, evacuation routes and places of refuge, so as to improve the ability of cadres and masses to prevent disasters and avoid disasters and help each other.

4. Protect our environment. Some disasters are due to human activities. It is time we stop over-exploration and protect the environment. Geological disasters caused by man-made activities are mainly caused by the destruction of the original geological and natural forms by a large number of construction, exploitation and mining activities during the development of human society. So to prevent these kinds of disasters, we humans need to respect the environment we live in and develop moderately. 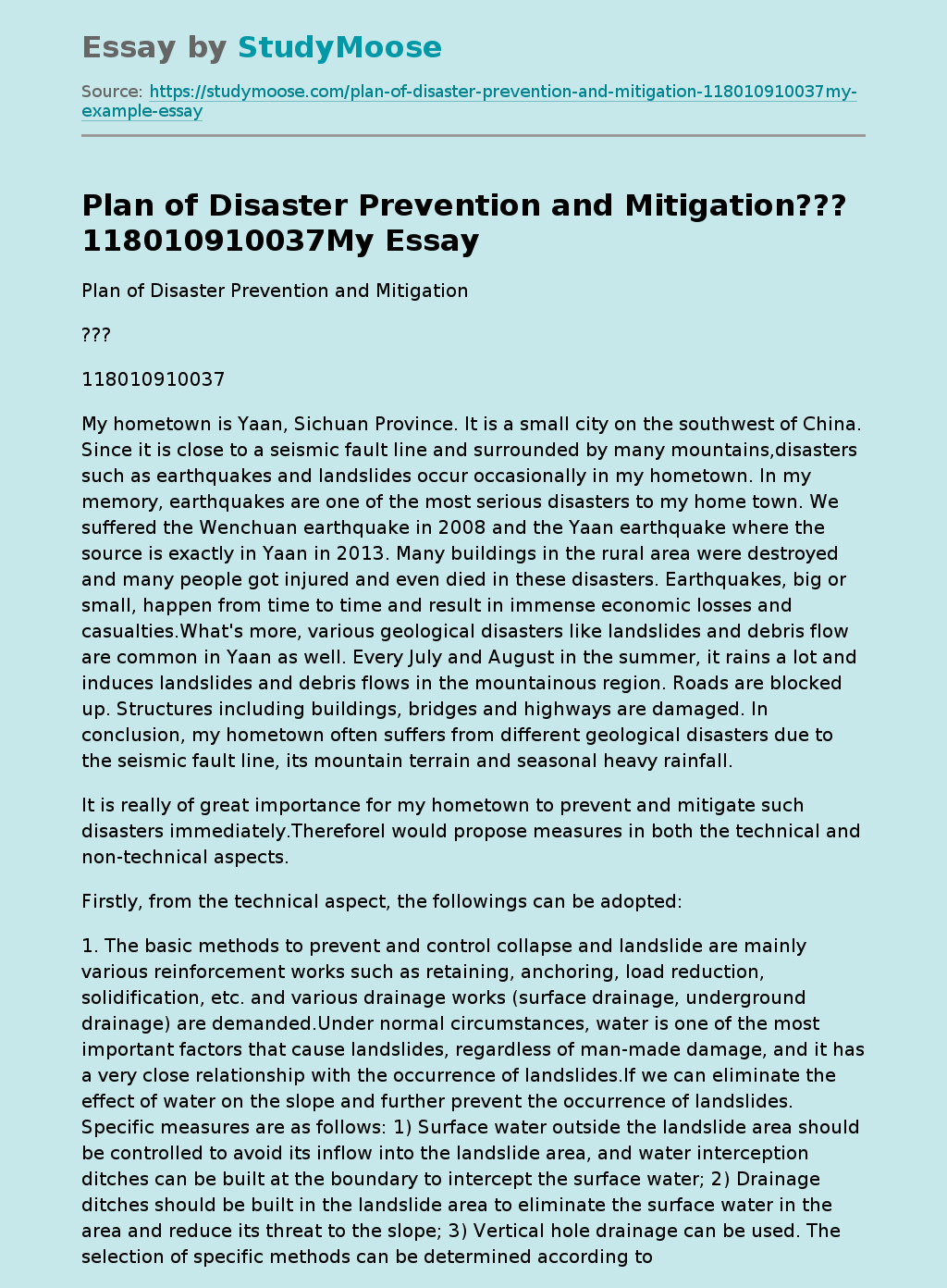