Engineering Ethics Violated and Upheld In the Fukushima Disaster

Engineering Ethics Violated and Upheld In the Fukushima Disaster

On March 11, 2011 an earthquake took place in Tohuku District, in Japan. The earthquake triggered a massive tsunami that resulted to an outbreak of a nuclear power plant in Japan. The tsunami was about 14- metres in height and it struck the Fukushima Daiichi nuclear plant, that is located in Okuma and Futaba tons in the Fukushima Prefecture (Japan-earthquake, 2013). This caused the loss of power to the reactor that had units of 1, 2 and 3.

Don't use plagiarized sources. Get your custom essay on
“ Engineering Ethics Violated and Upheld In the Fukushima Disaster ”
Get custom paper
NEW! smart matching with writer

Additionally, the outbreak caused failure of the cooling system and an explosion of hydrogen that caused a massive destruction of the entire nuclear plant. The damages came along with extensive release of radioactive reactors into Japanese atmosphere and the entire world. Great damages certainly happened to Japan and its dwellers.

There are many theories regarding this accident, but the disaster was majorly caused by either man-made disaster or a natural disaster (Ho, 2011). The implications of this disaster were tremendous in aspects of ecology, sociology, health and social hazards.

Engineering ethics is a system of moral principles and field of applied ethics that are applied to the field and practice of engineering.

Engineering ethics seeks to examine and set obligations for engineers to the society, customers and to the engineering profession. This discipline is closely related to other subjects such as ethics of technology, philosophy of engineering and philosophy of science.

The code of ethics recognizes an engineer as a person who should work and pursue his or her profession with the greatest merit while committing his self interest to serving the community and pursuing the welfare and progress of the majority in the community. By changing the nature to benefit mankind, an engineer must be able to increase his or her awareness of the globe as the home of a man. Engineer’s interests to the universe should guarantee him power to overcome his spirit, skills and knowledge of reality to transform the earth into a fairer and happier place. An engineer should reject form of action that has a motive of causing general harm to the society so to prevent potential threats or hazards to the environment, health, life and the rights of human beings. Therefore, engineers are required to uphold the prestige of the engineering profession, ensure it is properly discharged and maintain a professional demeanour based on his or her ability, fortitude, honesty, modesty, justice, magnanimity and temperance. These values should be upheld with proper consciousness of personal wellbeing and subordinated to the social good. An engineer should ensure that he acquires new skills, more in the engineering field and the same time disseminate his knowledge, share his or her experience and provide opportunities for training and education for his employees, provide credit, moral and material hold up to the college or university where he or she studied, therefore, returning the benefits and chances he and his bosses have received. An engineer should execute his duties with efficiency, that is, he must ensure compliance of standards required by law.

This knowledge is very important in understanding where things never worked in Fukushima nuclear power plant. The research majorly focused with the ethics behind setting a nuclear plants and presentation are as follows.

As saying goes, “great power comes with responsibility.” This saying can be applied to a nuclear form of energy because of its additional power, but also to its volatile nature. Radioactive material is very hard to store and, therefore, presents a potential threat to the public health. The nuclear materials are also associated with the most powerful human weapons in the world. As an engineer contracted to set a nuclear plant, there are a number of controversial concerns that an engineer must address in order to uphold engineering ethics. Ethical issues that engineers could have addressed while setting Fukushima nuclear power plant include ramification of the location of the area that he plant was placed, this involved looking at the affects the plant could have to the people of Japan wellbeing and the people could have reacted to the idea of the plant. Global health safety is another concern that the engineers could have addressed (The Ethics behind a Nuclear Phase-out and Replacement, 2014).

The health and safety of nuclear reactors are the first consideration that engineers should have addressed during construction of Fukushima nuclear power plant. According to the National Society of professional engineers’ code of ethics, all engineers are expected to uphold the safety, welfare and health of the community. For instance, during construction, engineer should have used liquid sodium rather than water because sodium is much safe than versions of water. The engineers violated this code of ethics because the explosion of the Fukushima nuclear plant caused relocation of over 130000 people while 1,600 people were left dead (Bird, 2013). New times reported that more people around the place of incident were forced to relocate to other places much far from the area of accident due to radioactive materials that were released to the atmosphere. Japanese were quoted saying that, “this time we have nobody to blame for the mess that just occurred, we are responsible for the polluted environment around us….” (Bird, 2013).Public opinion ethics and global consequences

Fukushima nuclear power plant was against this code of ethics. The attitude of setting nuclear plant near public dwelling places was totally unethical. The results of the explosion were negative; many people were evacuated as others lost their lives. Therefore, according to this research, the public opinion ethics was not considered well by the engineers before setting the power plant at Fukushima a place that is surrounded by towns full of people. The engineers also never considered the safety of Japan’s and world’s environment. The radioactive materials released to the environment forced the government to relocate citizens who were living in the nearby towns.

The choice Japan needs to consider: as discussed in the paper the downfalls of the nuclear power production in Japan should serve as major reassessment test of Japan’s principle source of energy. The American Society of Civil Engineers (ASCE) and National Society of Professional Engineers’ (NSPE) code of ethics should be used to decide which source of energy Japan should take full advantage of (Code of Ethics, 2013). For instance, Japan should set a massive sea-based wind power off the coastal region of Fukushima and become independent of using nuclear energy that proved to be hazardous. Taking advantage of wave energy could be another solution of making Japan free of nuclear source of energy. This because the wave source of energy is beneficial and does not violate the ASCE’S and NSPE’s codes of ethics. This research, therefore, support and suggests the implementation of wind and wave power farms in Japan so as to make the country independent of nuclear powers caused great damage to the country’s dwellers and its environment.

Engineering Ethics Violated and Upheld In the Fukushima Disaster. (2015, Nov 18). Retrieved from https://studymoose.com/engineering-ethics-violated-and-upheld-in-the-fukushima-disaster-essay 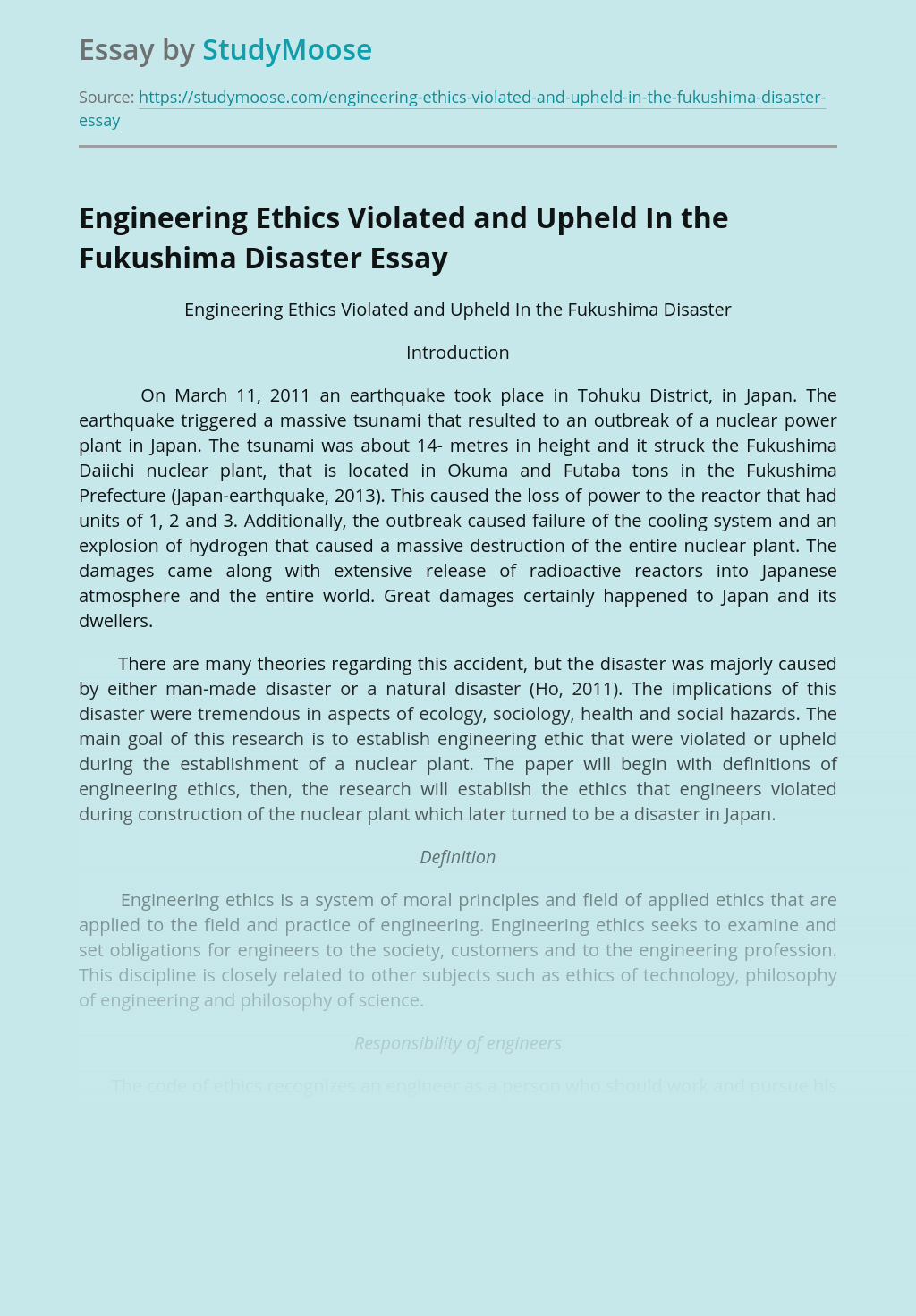