Sociology is defined as the study of the structure, development and the origin of the human society. The key element is the structure, which involves human interactions within a community. Those involved in the study of sociology are known as sociologists. One the key areas in which the sociologists apply their knowledge are in the field of disaster. Disasters are sudden and unexpected occurring events whose effects are severe including loss of life, damage to property and hardships. Examples of disasters include floods and airplane crashes.

Turn in your highest-quality paper
Get a qualified writer to help you with
“ Sociology and Disaster Management ”
Get high-quality paper
NEW! AI matching with writers

Sociologists have carried much study on disasters. The study of impacts of disaster has widely been explored. Disasters results are into both damage and physical injuries in the areas affected(Lindell 803). These injuries and damages have profound impacts on communities sociologically and psychologically on individuals. Many resources are destroyed during the attack of disasters. To study disaster, consideration to human ecology and structure are considered. The first is the environmental inequity paradigm that deals with distribution of resources in a society (Dynes).

Inequity in the access of resources by gender, age, class, and ethnicity, have a relationship with the level of exposure to disasters. Poor and minority people are likely to be affected by disasters such as flooding, landslides, tornadoes, hurricanes and technological hazards. They are mostly affected by these disasters because they reside in places with landscapes that are vulnerable and hazard pronely.

In societies that experience the inequity in the distribution of resources such as US, there is unequal access to opportunities as well as exposure to disasters (Lindell 810).

Most people affected by flood and other hazards are vulnerable including the poor, minority, elderly, children and women. Also, there is relative disparities in the impact of disasters on a different class of people. For example, the rich may have their homes insured while the poor have nowhere to seek housing since most are not able to afford the cost of insurance. Coping with conditional effects of the disaster is also brought by environmental inequity. The high class has varieties of ways of dealing with disaster stress that are quite good while the poor can only depend on their extensive kinship for assistance.

Secondly, the consideration of human ecology perspective by sociologists has enhanced disaster study (Drabek). Distribution of human settlement, technology in hazard-prone areas, and social organizations are the main focus points in the study of disaster. The distribution of settlement is mostly affected by population of the community. Social structure of a community is dependent on the life supporting activities of the occupants or the roles in which they play in the community, the population distribution and interdependencies of the occupants. Drabek explains further that the human ecology perspective argues that the environmental hazards such as floods, earthquakes, and hurricanes are socially created. The interactions between the social forces and the natural processes results are the cause of such disasters. The susceptibility to environmental hazards is closely related to ways constructed physically, technologically and socially to cope up with disasters. Adjustments should always be made in these areas in order to effectively cope up with disasters.

Another perspective is the conservation of resources theoretical framework (Dynes). Conservation of resources framework views the impact of exposure to a natural disaster on individuals psycho-social functioning negatively. People are afraid of investing due to the threat of destruction or total loss of these investments in case a disaster strikes. This framework specifies four categories of resources that include objects, condition, personal characteristics and energy. The object resources include automobiles, boat, home, household items and many others. On the other hand, conditional resources comprise of marriage, employment, kinship and organizational perspective. In addition, personal characteristics comprise of sense of self-worth, feeling independent and optimism. Finally, energy resources include time, money, information and knowledge.

The objectives of the research were; to assess the vulnerability of people to flooding, to evaluate the actual impacts of Tropical Storm Allison (TSA) and to identify the modes of adaptation of the victims of flood. The research addressed questions on characteristics of flood victims, physical environmental features that make the community more or less prone to flooding, impacts of flood and the attitudes of the residents about flood hazards, precautionary flood control measures implemented by the respondents prior to TSA, major obstacles to flood prevention in the communities, how the residents perceive the effectiveness of available flood control measures, residents flood coping behaviors and major sources of coping with the impacts of TSA, existence of racial and socioeconomic differences in flood insurance, reliefs and coping measures and finally the existence of variation in race and socioeconomic factors in flood vulnerability, impacts and mode of adaptation.

Research methods used include sample and survey. The affected communities were visited immediately after the impact to gain firsthand information about the number of residents affected. Houses properties that displayed damage by flood were identified for sampling. A total of three hundred homes were drawn for sampling in which one hundred and forty-nine completed the eleven pages questionnaires administered to them. After collecting the information required, the results were grouped by social and demographic attributes corresponding to the research questions. Among those who responded, fifteen point six percent and thirty-two points percent two indicated their community flood level are in the range of exceedingly rare and small respectively. Another result was the nearness to water bodies. Thirteen point five percent indicated that their homes were less than a hundred yards to a quarter mile from a water body while twelve point eight percent had a distance of a quarter mile to a mile and a half. Another thirty-one point two percent had a range of two to five miles distance compared to the twenty-nine point one percent who had a distance of more than five miles to a water body.

Problems Related to the Oil and Gas Industry During a Flood Disaster: The Nature and Extent of Citizen Complaints and Satisfaction with Government Responses

The study relied on the in-depth interview with individuals who owned, managed, or resided on or adjacent to the property that contained the oil. From the ten participants interviewed, five were male, and the other five were female. Four of those interviewed owned and resided on the land where a good facility was damaged. One of the respondents was an owner of agricultural properties in the zone of disaster, and the other five resided on the property near problematic well. One of the preliminary findings was that the citizens complained and reported the impacts related to oil and gas facilities. Some of the residents complained contamination of air, water and soil. Another finding was about the Colorado Oil and Gas Conservation Commission (COGCC) response to impacted wells. After being invited by one of the respondents, the COGCC told the respondent that there was no evidence of the contamination coming from the surrounding well facilities. The respondent was dissatisfied with the claims and indicated that the Commission was unwilling to investigate thoroughly whether the contaminations came from the wells. 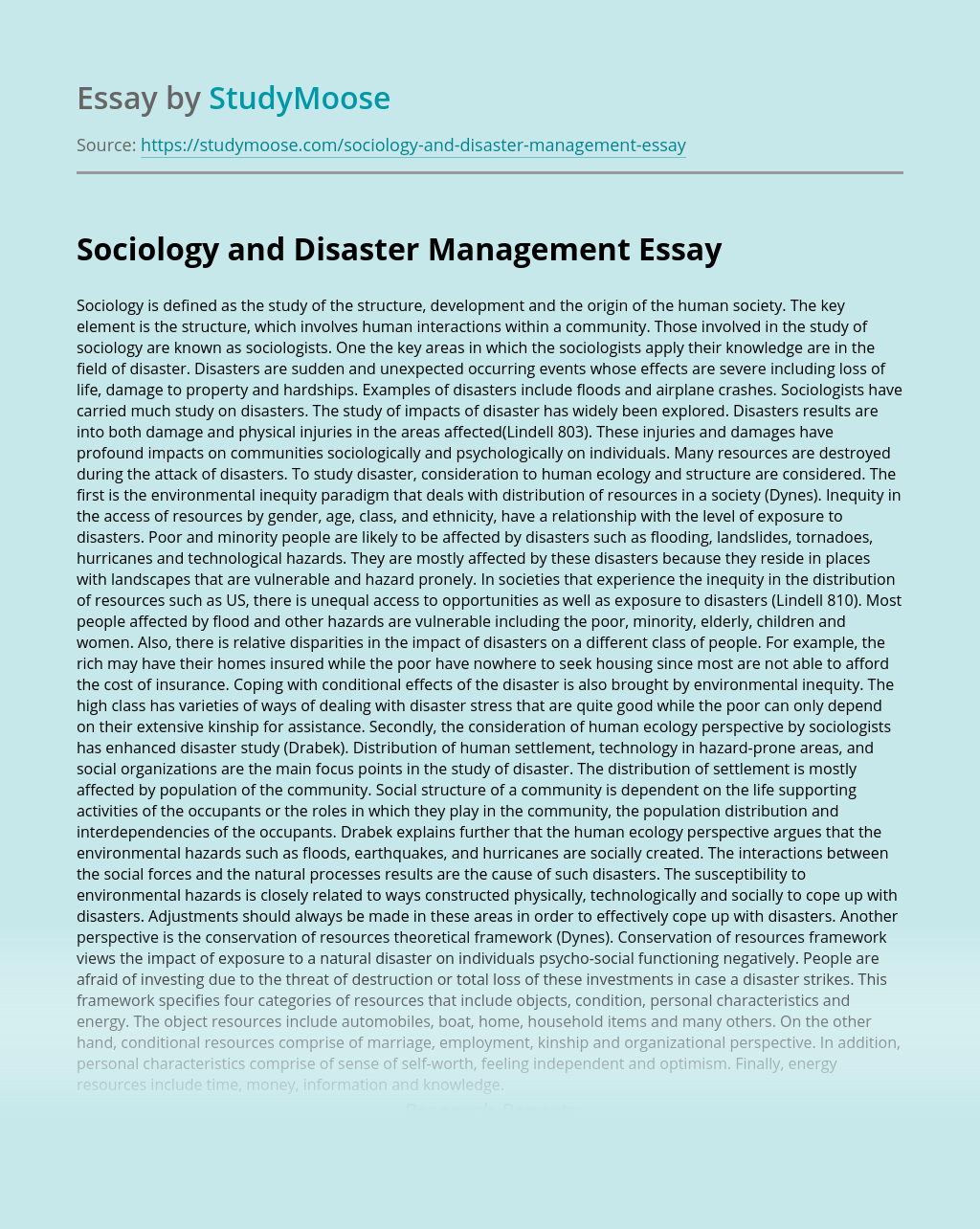 Turn in your highest-quality paper
Get a qualified writer to help you with
“ Sociology and Disaster Management ”
Get high-quality paper
Helping students since 2015
Stay Safe, Stay Original