The effect of earthquake

What is earthquake? Earthquake is just a sudden movement of the earth’s crust caused by the release stress accumulated along geologic faults by volcanic activity but just because of this sudden movement, it can destroy a city in a few minutes. As far as the environmental problems which are widely prevalent in the twenty-first century are concerned, earthquakes definitely stand out as the most widespread one. Even though most of the government takes measures to rout out earthquakes, they are disappointed.

Don't use plagiarized sources.
Get Your Custom Essay on The effect of earthquake Just from $13,9/Page

There can be more than thousand people buried in the wreckage just because of earthquake and most of them definitely are dead. For an example, there is an earthquake in Tohoku registered a moment magnitude of 9.0. The death toll from the earthquake is 13,000 and there is still more than 12,000 people missing.

Second is the psychological effect to the survivors and this is also important as an effect of earthquakes. That is because earthquake may enable people to display mental disorders such as depression and neurosis. According to scholars, above ninety percent of humans probably have psychological problems in their future lives that who have went through the earthquake.

Results of an Earthquake

Apart from psychological disorders, damaging to buildings can certainly result from the earthquakes. Non-durable buildings may be destroyed because of concussion of the earthquake. Thus, most of the people can lose their own homeland when they are facing the earthquake. As it is very clear seen, damaging to buildings is directly proportional with earthquakes. At last, it is an obvious fact that earthquakes cause deaths, psychological troubles and the destruction of buildings. The point to be emphasized is people should know that unless they understand these effects, they will inevitably be faced with a great deal of problems.

The effect of earthquake. (2016, May 15). Retrieved from https://studymoose.com/the-effect-of-earthquake-essay 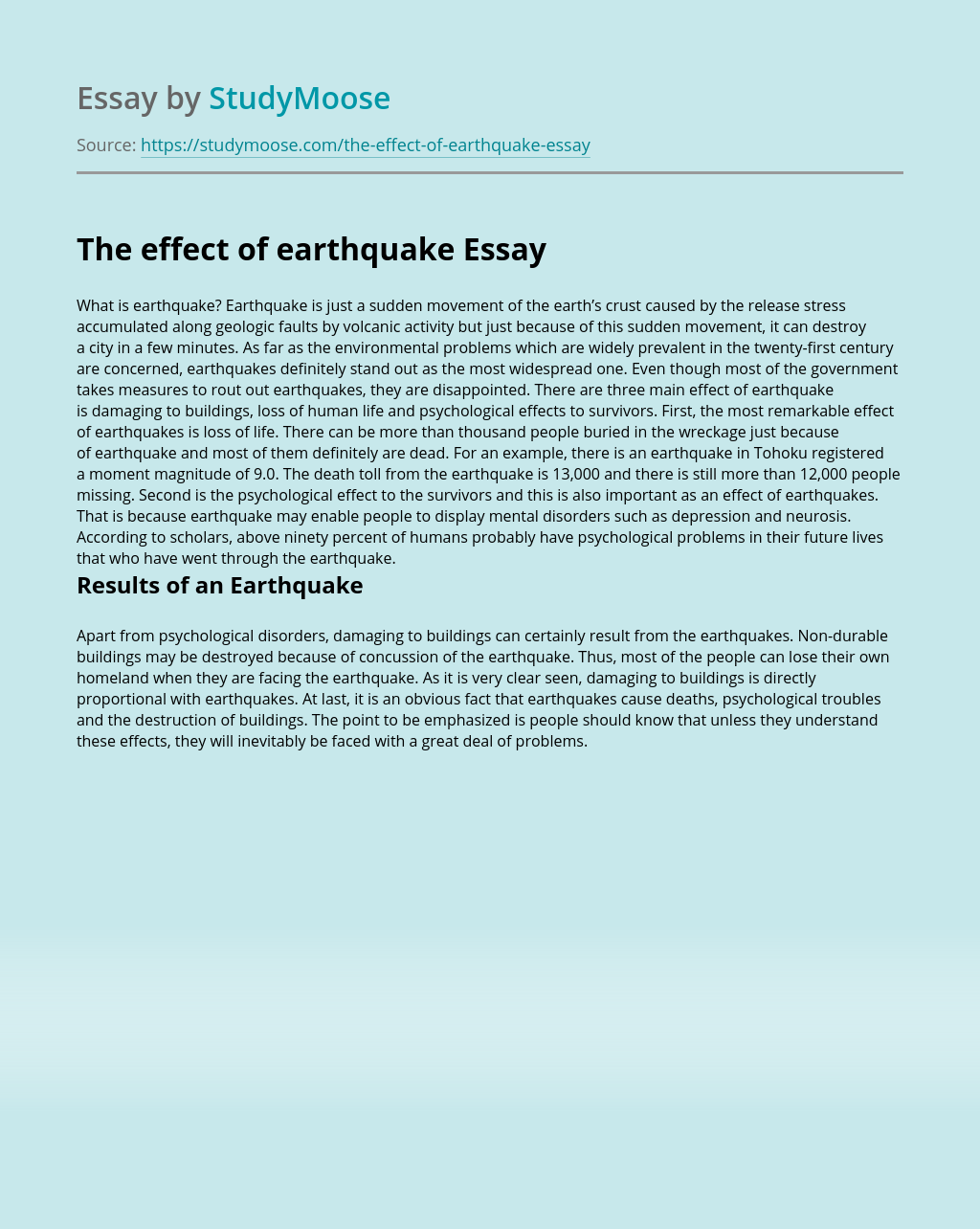 Importance of Line or Staff Departments and Methods of Effecting Change

Which type of department (line or staff) is most important to an organization? Why? Could an organization function without either of them? Why or why not? In every organization, authority is divided in order to make sure the firm is successful. This division ensures that no one department is responsible for everything. As an organization...

Harriet Martineau and the Conflict Theory

Introduction In the early 1990s, the Florida Department of Management Services (DMS) had built up a large information systems network that served state government agencies in 10 regional sites and connected these to the data center in Tallahassee. The network was based on the use of the proprietary Systems Network Architecture (SNA) from IBM and...

A Career In The Culinary Arts

The culinary arts provide many career opportunities within the food service industry. As this industry has grown and prospered, a career in this field has become highly visible and offers the flexibility to work anywhere. Although a career in culinary arts requires extensive professional training and discipline, it offers a combination of challenging and creative...

During the month of Kartik in the Bikram Sambat calendar