When a person is deliberately hindered from doing as he wills, then the person is deprived of freedom or enslaved (Berlin 121); however, when one acts as one wills without obstruction, that person has freedom (Berlin 122). This is Liberty. Once concern is directed towards liberty that is relative to the area in which there is no obstruction, then the concern is directed towards negative liberty.

The right to privacy for example, the government must respect this area of freedom of the individual.

Don't use plagiarized sources. Get your custom essay on
“ Berlin’s Two Concepts of Liberty ”
Get custom paper
NEW! smart matching with writer

This is opposed to positive liberty which is concerned with who it is that governs that area which the person is so freely to move about (Berlin 121-122). The government is one of such entities that exercise positive liberty in imposing laws on the citizens to maintain order. These two concepts are easily confused.

They may also be merged. However, Berlin was worried that the distinction between these two concepts of liberty would be confused; so he sought to contrast these two senses of liberty extensively enough to present the danger posed upon society by positive liberty, not realizing that at the other end of the spectrum, negative liberty might be just as dangerous as the positive.

Surely enough, one cannot deny feeling the vastness of the universe or the randomness of those that occur in the immediate surrounding. There seems to be an inevitability of encountering things that a person may be unable to control which may be an obstruction to the quest for a goal (Berlin 135). This could be as depriving as getting imprisoned when the allegations are false or simply being prohibited of smoking in a restaurant.

When obstruction occurs, when the source of this force is unidentifiable, or its strength is much greater than the person can exert, when the person become helpless under the whims of this uncontrollable entity, the person can cut off the attachment to these goals because they are unattainable; degrading such goals until they are of no value which in turn eliminates the hindrance because it hinders the person from nothing anymore.

In a state that prohibits smoking, a smoker may quit smoking or leave the state, whichever is easier or is of lesser value. That person acquires the negative sense of liberty (Berlin 135). This sense of liberty also entails another thing: one can learn to not aim for something impossible because in doing so, one will become enslaved (Berlin 135). Man then becomes reluctant at his development if development means to aim high, to dream farther than what is currently in plain sight because if he remains in the safety of his current situation he is free.

Cutting away though of every piece of freedom even with the slightest conflict is suicide because a human being requires some minimum, some space to exercise and sustain his humanity (Berlin 123,161); one can only go so far in contracting that area in which he experiences freedom. To say that negative liberty involves the area of liberty also means that this sense of liberty is actually the ‘freedom from’ and clearly not ‘freedom to’ which is positive liberty (Berlin 131).

Berlin puts it so easily: positive liberty is the desire or temptation for self-direction, or for self-determination. This becomes very dangerous when such beings around this person desire too with goals different from this person that might fail to harmonize with his own because he observes some uniqueness from the rest; a threat to his liberty then emerges in his surrounding (Berlin 131). In defense of his liberty, coercion—that which takes away liberty—is enforced.

The person must then impose himself or whatever part of him: his ideals, his morality, his rationality, his belief, upon those who don’t possess similar virtues. If the person believes enough that what he has is some sort of greater knowledge far rational or virtuous than others, he then acquires the freedom to dictate his truth. Tyranny is then justified because the oppressed lack the tyrant’s values; this person becomes driven by the thought that if the others would only gain his higher truth then there would be no need for coercion because they would choose to do so themselves (Berlin 132-133).

All a man has to do is make copies of himself in those irrational and obscured men for clearly, no man is a slave to himself; much in the same way why no one is a slave under a commonwealth because the common interest includes one’s own (Berlin 147). Through such coercion or rule of law for one’s own sake, there must then be the negative sense of liberty for a person who follows and believes that it is for his own sake (Berlin 133). The despot’s brashness is not only then just justified, it is praised. Astonishingly, what takes away liberty, gives liberty.

But coercion is an end which should never be justified because coercion, even if it is for the good of a subject, means that the subject is something another person can shape or mould to his will. This rids the subject of his human essence because the subject has a will of his own which is probably equally ultimate as that of the tyrant’s (Berlin 137). How fortunate for a tyrant to have a means with such an end: to acquire the freedom to coerce another being which then in turn liberates that being. Such is the danger Berlin perceived.

The literature in which Berlin distinguishes between these two concepts of liberty is certainly an exhausting one to conceive or write. Yet exhausting as it may have been, the author might not have been thorough enough in his definition and development of the negative sense of liberty. Berlin might have either oversimplified the definition of negative liberty as to have unintentionally changed what he supposed it to mean or that in wanting to distinguish so much the difference of positive and negative liberty, he overlooked the great similarity both these senses have; a similarity so great that in a sense the two are not at all dissimilar.

If the negative sense of liberty is acquired by contracting the area of control, to draw back, retreat, or to let go of some values to get rid of obstruction, then it is not merely the concern for area as Berlin defined it in the earlier parts of his distinction between positive and negative liberty because to increase them now becomes a matter of positive liberty (Berlin 131), which is the second thing that needs to be pointed out.

The concern for increasing one’s area becomes a concern for who it is that a person will collide with; who must be coerced to experience this greater freedom that is so desired (Berlin 121). Although a man is concerned with the width of his liberty, if he recourses to widen this liberty, he is also then concerned for whoever it is that has control over the extent of his liberty.

If that man only lessens his piece of land then he needs not worry of that which surrounds him, but when he attempts to expand his freedom, he will be bound to trespass on another’s territory. The negative sense then becomes the positive sense. Berlin’s critique of positive liberty then must be equally applied to negative liberty which is just as dangerous as the positive. Although there is a clear distinction between the two senses of liberty, they are certainly not far from each other—certainly not non-intertwining. 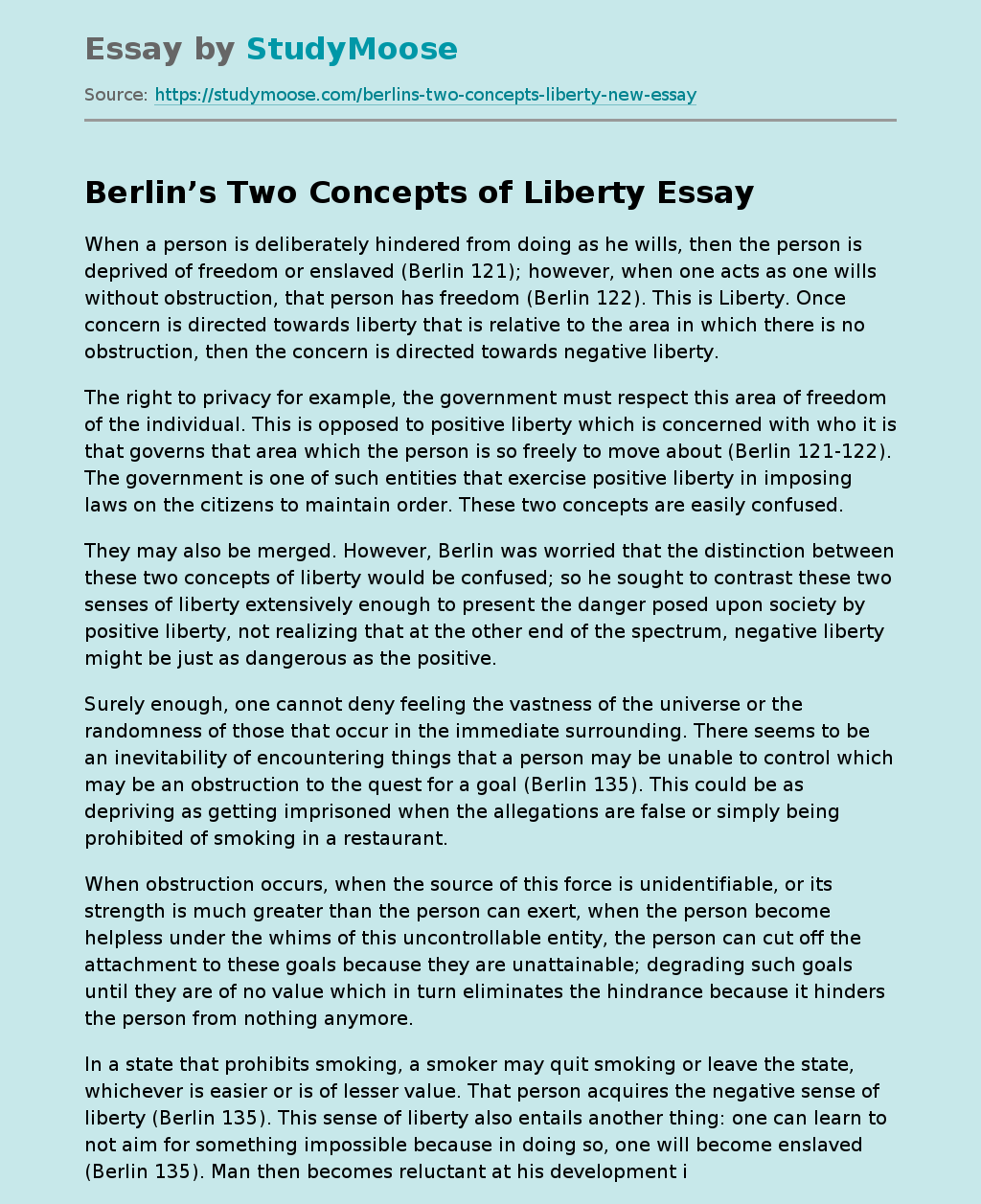