The principles of liberty and equality are what led America to be the great country it is today. Those terms would not be as meaningful if Thomas Jefferson, George Washington, Abraham Lincoln, and many other founders of our country did not embrace those ideas and adopt them from the Europeans. The strong belief in liberty and equality led this nation to adhere to those standards set by the great leaders above. Without liberty, equality, and those who fought for the pursuit of these ideals, life in America would not be the same.

Don't use plagiarized sources. Get your custom essay on
“ Liberty and Equality ”
Get custom paper
NEW! smart matching with writer

The great leaders who helped bring liberty and equality to America did not create these concepts; they were adopted from the European countries that were also fighting for equality and liberty. William Russell claims that the idea was not formed in America. He states, “The climate of America did not breed liberty, nor did its geography foster equality” (Russell 55). Even though the idea might not have come from Thomas Jefferson himself, he was still instrumental in the formation of American values and the implementation of democratic ideals in America.

Proficient in: Liberty And Equality

Jefferson strongly believed that every citizen deserved to be equal. He did not like the fact that some people had more rights than others, because this implied that not everyone in America was the same. Jefferson had the perfect opportunity to express his feeling and he did; when he helped draft the Declaration of Independence, Jefferson wanted to make sure that no group’s rights were limited. Jefferson also highlighted the importance of everyone’s ability to pursue their own ambitions, by stating that we all possess “unalienable Rights, that among these are Life, Liberty and the pursuit of Happiness” (The Declaration 7).

This statement has become iconic because of its message—anyone can and should be able to follow their dreams. This step was crucial in the formation of America’s democracy. Similarly, George Washington upheld the values of liberty and equality by citing views comparable to Jefferson’s. Washington strengthened his argument when he included the notion of God’s involvement in the success and the happiness of the people in America. In his First Inaugural Address, he expresses to the people that the Almighty Being has the power and the will to heal all defected humans and to bring happiness to every human being in this country. Washington asks that God’s “Benediction may consecrate to the liberties and happiness of the people in the United States a government instituted by themselves for these essential purposes” (First Inauguration 44). Washington believed in the importance of God in guiding citizens toward a thriving government and nation, which he believed would lead to the happiness of the American people. He states the significance of sticking to rules placed by the Almighty, because the nation that follows the rules of Heaven will receive smiles.

Like Washington, Abraham Lincoln also felt that God was an influential Almighty Being, who could help America meet its longtime goals of Liberty and Equality. Lincoln wanted everyone—from the slaves to the slave owners—to be in an equal nation under God. He expressed these thoughts in the “The Gettysburg Address.” In this speech, he explains that the current Civil War was being fought to preserve the idea of total equality, and to abolish the institution of slavery. Lincoln states that the nation under God “Shall have a new birth of freedom” (Gettysburg 93). The war’s purpose, to settle a longstanding dispute between the North and the South, evolved from Lincoln’s desire to rid the nation of slavery. Both Washington and Lincoln believed everyone—including African Americans, women, and any other marginalized group—had the right to freedom. Likewise, Henry David Thoreau’s essay “Civil Disobedience” expresses his thoughts and feelings about laws set by the government. Thoreau explains the role of liberty and equality in America differently than Washington and Lincoln. He decides against using God as a persuasive tool. Instead, he encourages people to stand up to the government and disobey the laws they feel are denying justice to certain people. Thoreau believed that to fight a law in a “civil” way, you must “Cast your whole vote, not a stripe of paper merely, but your whole influence” (Civil Disobedience 9). He suggests that if one person expresses his or her idea of justice, more people may speak up and fight back. He believed this would lead to the government’s forced compliance with more just acts of liberty and equality. Martin Luther King Jr. took Thoreau’s ideas to heart. He very famously stood up to laws he believed were unjust during the Civil Rights movement. He fought a very long time to bring a greater level of equality to America, especially for African American people. King felt that liberty and equality had been denied too long for African Americans. He expresses that thought in a letter from his jail cell in Birmingham. King writes, “We have waited for more than 340 years for our constitutional and God given rights” (King Web). King’s frustration led him to believe that his best option was what Thoreau describes: civil disobedience. Ultimately, King’s pursuit of liberty and equality proved incredibly worthwhile; his acts of civil disobedience changed the landscape of American culture.

Throughout history, America has had great leaders of all backgrounds and religions. This diversity has strengthened our desire and pursuit of equality and liberty for all. Each great leader, writer, and thinker has contributed to the molding of America as a democratic land. Each person encouraged others to contribute to their cause, resulting in a country where liberty and equality have truly become a group effort. 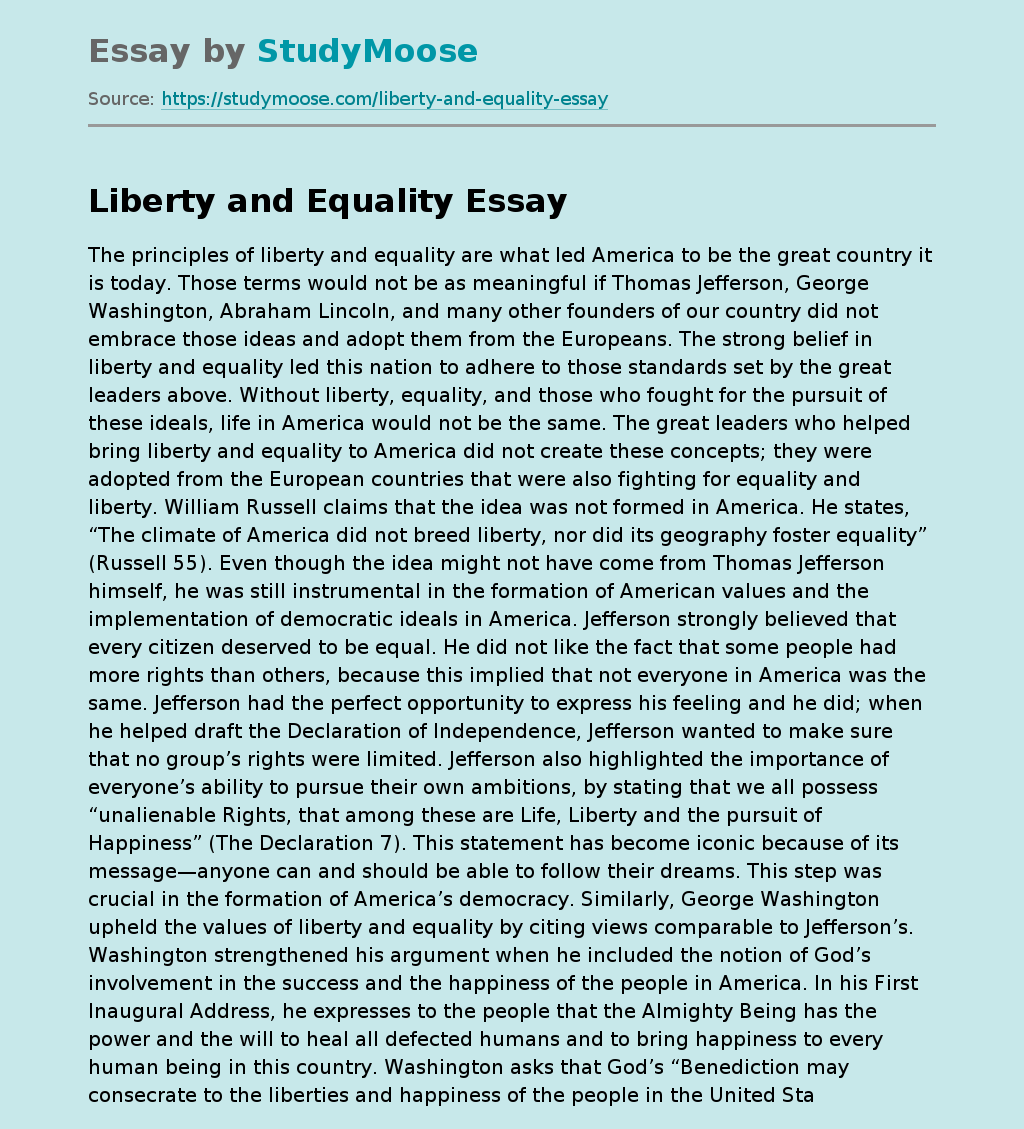