The accomplishment of total liberty can not be achieved without the complete satisfaction of equality. Sir Isaiah Berlin once said “If you have maximum liberty, then the strong can destroy the weak, and if you have absolute equality, you cannot have absolute liberty, because you have to coerce the powerful… if they are not to devour the poor and meek… Total liberty can be dreadful, total equality can be equally frightful.” The yin and yang of freedom’s political society; a nation conceived in freedom can not have both of two worlds.

Don't use plagiarized sources.
Get Your Custom Essay on Liberty, Equality, and Justice Just from $13,9/Page

Each of these subjects differs in many ways yet is similar in many ways, like a magnetic object each has attracting and deflecting energy within them.

The statement quoted by Sir Isaiah Berlin portrays his point of view of liberty, equality, and justice. He stated that a society can not have both absolute equality and liberty working together side by side. Meaning, that both of these are opposite of each other due to the nature of their laws.

Achieving maximum liberty can give more power to the strong, wealthy class citizens, to govern over the weak, lower class citizens. The strong have power over others due to their excessive wealth; for example, a wealthy individual would drape themselves with designer clothing, jewelry, and be well groomed, whereas a diminutive citizen would appear in less glamour than the wealthy, due to lack of funds. If either of them were to commit a crime the wealthy would be able to afford a better attorney and have a better chance of being acquitted of the crime, but a poverty-stricken citizen would have to struggle just to receive the same acquaintance as his counter part with a less likely chance of succeeding.

The strong could contend with the law and act as if they could get away with anything, whereas the opposite action would occur to the weak. Berlin’s statement proves that the strong can take advantage of the freedom given to them, and use it for their own luxury. Now if absolute equality would rein society, then we can not have equal liberty, considering that if everyone was equal than each person would receive equal pay, property, power, laws, jobs, and so on, basically, everyone would have to be equal to one another. This would not give them freedom to choose what to do in their life, because each person would be the same as each other, also being similar to communism.

John Rawls argues that the principles of justice determine how the benefits and burdens of society are to be distributed among individuals in an equal manner. Thus for Rawls, justice is fairness. But consider, how can people decide what is fair, when they live in a nation of great inequalities and diverse interpretations of utopian society? Rawls suggests that the principles of equality would have to be agreed upon by the people as what he would call ‘original position.’ Rawls’ idea of ‘original position’ would be hypothetical or imaginary, meaning that the individual would not know his position in life, including race, sex, and economy. Rawls’ would then appoint his two principles towards that individual. He states that basic rights and liberties should be as extensive as possibly could, to each individual. Rawls’ stated, second that any social and economic indifference should be made equal in any position, while providing the greatest benefits to the poverty-stricken.

The beliefs of Berlin and Rawls on liberty and justice are two completely different beliefs with many arguments that contradict each other. Rawls believes everyone in society should be treated with justice and liberty to the fullest extent, but on the other hand Berlin’s thoughts differ from Rawls, because how can one have justice and liberty in the same package if having to much of either one will imbalance them. Rawls’ two principles suggests that social and economic indifferences should be equal and basic rights and liberties should be as extensive to each individual, but how can you achieve both when having extensive basic rights and liberties will handicap their economic status by having each individual endure a political aspect that are similar to each one another.

Meaning, that each person would have the same power as the person right next to them, but to achieve this they would have to settle differences through their imperfect factors, such as, ethnicity, creed, and sex. How can humans eliminate these factors in their society when there is no such thing as a ‘perfect individual?’ Thus making Berlin’s comparison to Rawls’ statement inconsistent, because of how the two societal factors can not balance each other without losing some attributes to them.

With the two philosophers enduring thoughts about liberty and justice, mixed in with the equality of individuals of society, these factors can not be consistent with each other. Berlin’s statement would be a true pick towards how society can not have both of two worlds. These two different attributes would not give part in what utopia is, as Rawls would have thought it could have. Even with the optimistic views of Rawls, some views can not be viewed without seeing the darker perspective to it. Thus, tying in with what Berlin would consider his ‘dark perspective.’ 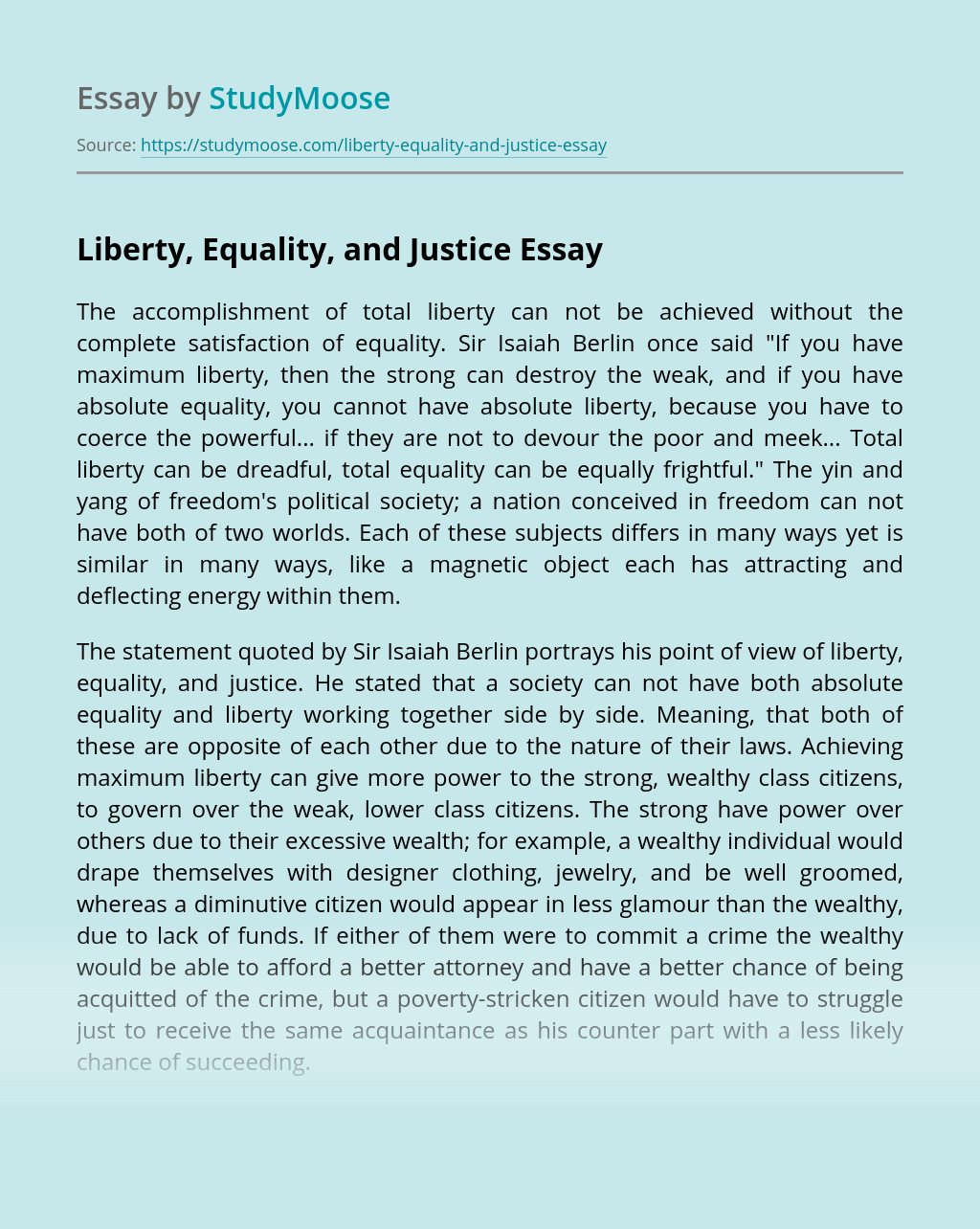 Short and Long term Causes of the French Revolution

The French Revolution beginning in 1789 redesigned the country’s political landscape and uprooted century old institutions. The movement was a result of a combination of various factors and played a critical role in shaping and showing modern nations the power inherent in the will of people. The Monarchy’s absolute rule and ancient regime were tested...

As one of Britain’s greatest orators, historians and famous Whig politicians, Lord Thomas Banington Macaulay’s speech to Parliament on March 2, 1831 stands as one of the most important political documents of the early 19th century.  “It was the time of the Tory dominance and the Whigs’ identification with the middle classes[…] Macaulay voiced the...

Get Essay
Liberty, Equality, and Justice

The accomplishment of total liberty can not be achieved without the complete satisfaction of equality. Sir Isaiah Berlin once said “If you have maximum liberty, then the strong can destroy the weak, and if you have absolute equality, you cannot have absolute liberty, because you have to coerce the powerful… if they are not to...

Causes of The French Revolution

The Scientific Revolution on the Enlightenment Era