What is the difference between a liberty and a right? Both words

What is the difference between a liberty and a right? Both words appear in the Declaration of Independence and in the Bill of Rights. The distinction between the two has always been blurred, and today the concepts are often used interchangeably. However, they do refer to different kinds of guaranteed protections. Civil liberties are protections against government actions. For example, the First Amendment of the Bill of Rights guarantees citizens the right to practice whatever religion they please. Government, then, cannot interfere in an individual’s freedom of worship.

Don't use plagiarized sources. Get your custom essay on
“ What is the difference between a liberty and a right? Both words ”
Get custom paper
NEW! smart matching with writer

Amendment I gives the individual “liberty” from the actions of the government. Civil rights, in contrast, refer to positive actions of government should take to create equal conditions for all Americans. The term “civil rights” is often associated with the protection of minority groups, such as African Americans, Hispanics, and women. The government counterbalances the “majority rule” tendency in a democracy that often finds minorities outvoted.Throughout the United States, many people have challenged civil liberties and rights upon a case in federal court.

However, most of these people were not ideal citizens, and many even conducted severe criminal acts. The question behind the following cases is whether or not the accused should still be granted their rights and liberties that were originally implanted in the U.S. Constitution. Imagine the following cases: A pick ax murderer on death row who found God and asked for clemency.A publisher of magazines, books, and photos convicted for sending obscene materials through the United States mailA convict whose electrocution was botched when 2,000 volts of electricity rushed into his body, causing flames to leap from his headA university student criminally charged for writing and publishing on the internet about torturing and murdering women.

What do the above scenarios have in common? Well, according to government, all of the people in the above scenarios still have rights. Each of those people made sensational headline news as the center of one of many national civil liberties disputes in the late 20th century. They became involved in the legal process because of behavior that violated a law, and almost certainly, none of them intended to become famous. More important than the headlines they made, however, is the role they played in establishing important principles that define the many civil liberties and civil rights that Americans enjoy today.Let’s take a step back to look at the history of civil rights. The year was 1968, which was the peak of civil rights activism. Five years prior, Martin Luther King, Jr., inspired the nation with his I Have A Dream speech on the steps of the Lincoln Memorial, following the March on Washington. Not long after, the Civil Rights Act of 1964 became law. A year later in the Spring of 1965, more than 600 protesters marched from Selma to Montgomery, Alabama. A few months after that, the Voting Rights Act of 1965 would be signed into law.Meanwhile, in Los Angeles County, the largest Latino community in the United States, had more than 130,000 students attending area schools. And their prospects were dim. Graduation rates were one of the lowest in the country. The dropout rate at Garfield High School in East Los Angeles was a staggering 57.5%. Average class sizes in area schools were 40 students and the ratio of school counselors to students was one counselor to 4000 students.As portrayed in the 2006 movie titled Walkout, which was based on a true story of a relatively unknown, yet profoundly momentous event in the Mexican-American history, civil rights and civil liberties were violated of thousands of students. It tells the story of the 1968 protest movement staged by thousands of Chicano students from five high schools in East Los Angeles. Paula Crisostomo is an honor student at Lincoln High School. For the first time in her life, Paula challenged the authority of her elders by arranging a mass student walkout across five high schools in East L.A. Her anger was ignited by the unfair treatment given to Chicano students in the school system followed in Los Angeles. This includes the out-of-hand refusal to prepare recommendation letters to choice colleges, degrading physical penalties, unjustly implemented punishments for minor violations, a completely non-existent bilingual courses or textbooks, substandard facilities, and generally lowered expectations. Walkout conveys a powerful message that still echoed thirty-eight years following the time the real protest occurred. (Thirty-eight years after the Chicano movement was the year the movie was made)With the help of the progressive and popular young mentor, Sal Castro, Paula and the rest of the protesters struggled to make their voices heard. In the process, the students learned significant life lessons such as the importance of fighting the things one believes to be right and true, as well as the need to embrace one’s own identity. The story is a clear reminder that people who come to unite for a just cause can make change possible.The youth-led protests which took its inspiration from the civil rights movement appealed for the implementation of a curriculum which incorporated Latin American history. Similarly, it appealed for the abolition of janitorial work as a form of punishment. The movements were meant to be peaceful protests. However, a violent and overzealous racist police force attacked and detained the unarmed student activists. The angered community was awakened and a struggle for justice began. It initially got the parents involved, followed by community leaders, and ultimately forced the school board to take notice in the end.Eventually, the Chicano movement shaped real changes, causing an increase in enrollment of Latinos in college by almost 25% two years following the protest. Nonetheless, its emphasis on the youth-led struggle remains inspirational for present day activists. The younger generation still wages the battle against war of all kinds, poor quality of education, racial discrimination, and reactionary policies among others until this very day. It leaves a timeless message that change is possible when concerned people will unite to fight a cause for the common good.

What is the difference between a liberty and a right? Both words. (2019, Aug 20). Retrieved from http://studymoose.com/what-is-the-difference-between-a-liberty-and-a-right-both-words-essay 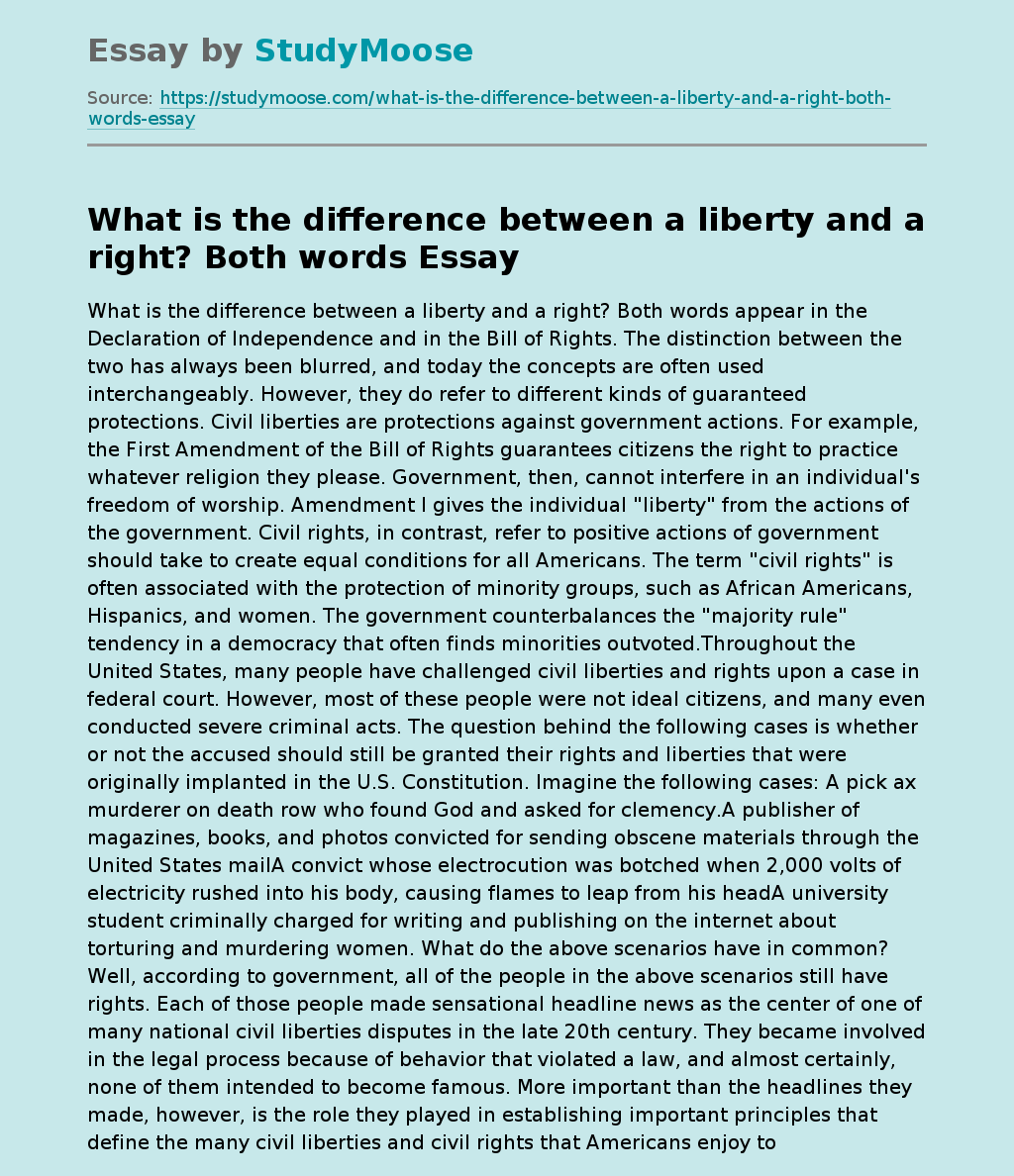