"I, Too Sing America" by Langston Hughes

Poem “I, Too Sing America ” is considered to be very characteristic for radical poetry of Langston Hughes. The majority of literary critiques and historians refer to Hughes as one of the first American poets, who set the standards and examples how to challenge the post-World War I ethnic nationalism. His poetry contributed and shaped to some extent the politics of the Harlem Renaissance. In analysis of Black poetry Charles S. Johnson wrote that the new racial poetry of the Negro is the expression of something more than experimentation in a new technique; it marks the birth of a new racial consciousness and self-conception.

Turn in your highest-quality paper
Get a qualified writer to help you with
“ “I, Too Sing America” by Langston Hughes ”
Get high-quality paper
NEW! AI matching with writer

It is first of all a frank acceptance of race, but the recognition of this difference without the usual implications of disparity (145). Being acquainted with many Hughes’s works, for instance “Our Land,” “The Negro Speaks of Rivers,” and of course “I, Too Sing America,” Johnson confirmed that poet had a strong sense of “race pride” and characterized Hughes’s poetry to be “without doubt the finest expression of this new Negro Poetry” (145).

Some literary critiques refer to Hughes’s poem “I Too Sing America” as radical poetry. However, if in this poem Hughes chose to sacrifice artistry for politics, it was not because the two are mutually exclusive. The main reason for such Hughes’s technique is that the blues aesthetic of his early poems embraced a form of nationalism he could no longer abide (147). Hughes himself concludes that the chief responsibility of the black writer was to produce a racial literature drawn from African American life and culture.

“We younger Negro artists who create,” Hughes wrote, “now intend to express our individual dark-skinned selves without fear or shame” (309).

Onwuchekwa Jemie, who identified Hughes as a black nationalist, notes that “Hughes’s insistence on a distinct black art … is … a recognition of the fact that Afro-Americans are a distinct people within the American nation” (103). Therefore, “I, Too” creates a feeling of an individual versus a large group enhancing the loneliness felt. The poem recognizes an actual inequality African Americans felt during a time period of racial discrimination. Hughes recognizes that although different in color, all people living in America were Americans and deserved to be treated not just equally, but with dignity and honor. Therefore, he poetically forecasts the trends America experienced in 1960’s when the equal status of blacks was nominal.

Hughes is not known for using lots of symbolism. His poetry is generally straight forward and to the point. There is not much hidden meaning in his poetry either. What little symbolism he does use is very deep. It can be interpreted in a many number of ways. “I Too Sing America” has psychological and cultural references such as intergroup stereotyping, communication, cooperation, and conflict. Moreover, it sounds like a slogan, appeal to immediate action. Therefore he hides his radicalism in very title of the poem, which is not a poem at a closer look but a song. It is very crucial to perceive “I Too Sing America” as a song, emotional, radical, political, but still focused on black aesthetics.

The poem is about the hope of one day being equal; it is expressed in each stanza at least once.

These lines represent hope along with determination. It also gives us insight to the style that Hughes uses in all his poetry. He uses humor in most of his writing to convey his message. What the laugh represents is his thoughts of the future. “I laugh…” They will laugh, and will be happy. Moreover, laugh means that he’ll be able to look back.

Eating is another interesting symbol. Most probably it represents learning and knowledge. Without knowledge one cannot further themselves in life or make themselves better. Eating well means to learn well and retain the knowledge. “Growing strong” represents the retaining of the knowledge. Not only does this mean to grow strong with knowledge but for the voices of equality to grow stronger. The biggest use of symbolism is the last line: “I, too, am America.” In Walt Whitman’s poem “I hear America singing” the American people are just the working class, Anglo Saxons. The line “I, too, am America” shouts out that someone was forgotten, an poetic echo of many years of oppression and discrimination. Whom are you are going to oppress. Hughes’s answer is – yourself. People oppressed themselves yesterday, are oppressing today, but will not tomorrow. Tomorrow will come and no one will be neglected.

The psychological and cultural references are not as blatantly placed as the symbolism. The darker brother represents the black man trough a metaphor. In society darkness is used to symbolize evil. Poet employs such a term not accidentally. Placing “dark,” Hughes emphasizes term “black.” Eating in the kitchen represents repression. Most Kitchens are hidden much like the suffering of African Americans. They were hidden from the company; the company can be interpreted as a metaphor for foreign countries, or people in general. Most American people were blind to the horror and brutality of slavery. Slavery was also psychological, that is why the knowledge is important. Before one can rise up, one must first discover what it is they are rising up against.

I’ll be at the table

“Eat in the kitchen’,

Above lines show that “dark brothers” have learned and will no longer be held down. It also shows the strength of their voices that no one will challenge any longer. It describes the future and the past using the kitchen as the world. The best realization is made at the end of the poem:

They’ll see how beautiful I am

Poet employs contrast technique to put a parallel between ugly black today and beautiful “dark brother” of tomorrow, making a transparent window through past to future. Captive Negro waits for tomorrow beauty and finally he will be rewarded for his patience and sufferings. In these last words, as many analysts believe, Hughes makes an emphasis on black culture, its terrific features and diversity. Rampersad writes, “through the display of black sensitivity, intelligence, and artistic versatility, it was believed, whites would come to a new understanding of the humanity of African Americans and help to accelerate social change” (16). If anything were going to convince a “white” America of the humanity and equality of blacks, it would have to be “culture,” that realm where human beings differentiate themselves from the “savage” and aspire to the divine.

"I, Too Sing America" by Langston Hughes. (2016, Jul 18). Retrieved from https://studymoose.com/i-too-sing-america-by-langston-hughes-essay 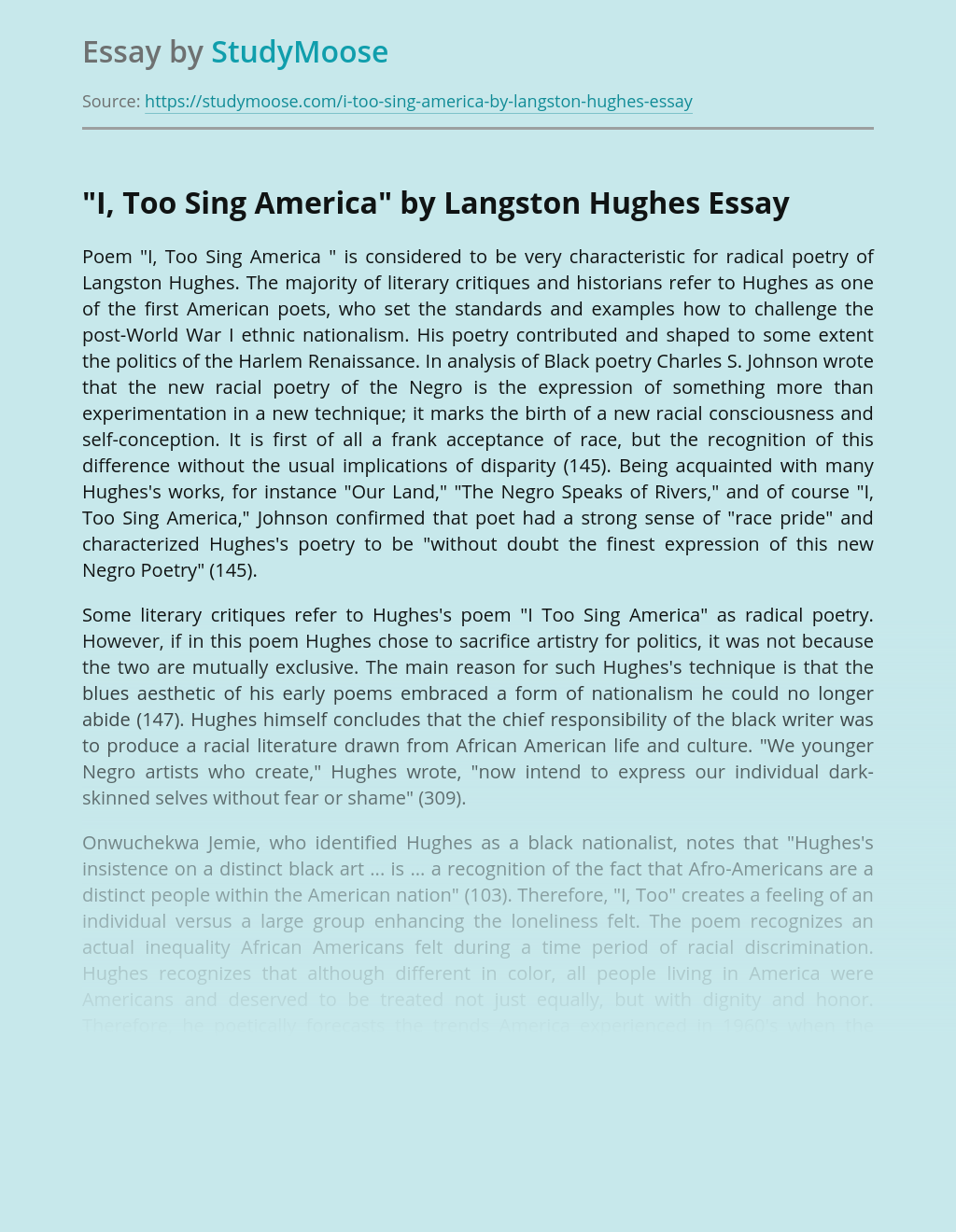 Turn in your highest-quality paper
Get a qualified writer to help you with
“ “I, Too Sing America” by Langston Hughes ”
Get high-quality paper
Helping students since 2015
Stay Safe, Stay Original