Assimilation in Book "Interpreter of the Maladies"

In the book Interpreter of the Maladies we were able to see many lessons from each short story. Jhumpa lahiri a writer born in london of bengali illustrates many aspects of relationships and through all of her short stories they involve a relationship between couples, friends, and family who all have an indian background. In the same way, Lost in translation by Eva Hoffman gives us insight on how her polish background affected her and the relationships she created and left behind.

Don't use plagiarized sources. Get your custom essay on
“ Assimilation in Book “Interpreter of the Maladies” ”
Get custom paper
NEW! smart matching with writer

Throughout both of these books, I was able to notice repeating themes; assimilation, ethnic identity, and communication which were big components to each story. These themes were able to shape each character, they served as a guide to help adapt oneself to the culture around them.

First of all, a common theme we experienced in our readings was assimilation. Assimilation is the process in which individuals or groups of a different culture are absorbed into the dominant culture of society.

When you assimilate to a group you tend to think you should be indistinguishable from other members of that society. According to the article ¨Very Well Mind¨ as people encounter new things and interpret these experiences, they make adjustments to their existing ideas about the world around them. Assimilation usually takes place when someone migrates to a new place with a different view than what you are used to. For instance, in “When Mr. Pirzada Came to Dine” Mr. pirzada had to leave his family behind in order for him to work in America and send back money to keep his family alive.

Lilia’s parents also had to emigrate from India in order to secure a future for their daughter. Lilia’s father in the book is worried about Lilia not taking in her indian background. He believes she should be more aware of the problems they are facing, while on the other hand, her mother says she shouldn’t need to worry about that because she isn’t living there. He is afraid that assimilation has brought a negative impact towards Lilia’s perspective of India.

Although assimilation may be done through force or undertaken voluntarily, it is uncommon for a group to replace its previous cultural practices completely for instance, religion, food preference, and aesthetics are some of the characteristics that tend to not change as much. In the memoir Lost in Translation Eva was forced to adapt to a new culture. Her parents had to create a change in their families life in order to guarantee them a future. With this in mind, Eva had to move from Poland to Canada and later on to America. In this book Eva tends to lose herself throughout her journey. She questions her goals and identities many times. Eva felt lost in the way she should express who she was, her ethnic identity was changed. Ethnic identity refers to the ethnic group with which an individual most closely associates with. Identifying one’s ethnic identity was not as simple to Eva anymore because of her journey. The novel sets an example of the relation between our personal identity, our enacted identity, and language. Her quest to find herself consists of internal struggle. Eventually she understands that she has to invent herself, ¨ this is a society in which you are who you think you are. Nobody gives you your identity here, you have to reinvent yourself every day¨(page 160). What could be taken into consideration here is the difference between the american and polish societies in this time of the the sixties.

Another theme that has been present in these stories is communication. Communication lets you to be able to show your individual self we have to be able to express our feelings. Jhumpa lahiri illustrates the importance of communication within relationships by allowing one to experience the consequences and advantages that happen through the short stories. Most of the stories in Interpreter of the Maladies occur in places that characters find hard to adapt to. In the short story ¨Mrs. Sen¨ who lives in America with her husband, is having trouble adapting to american cultures. This shows that she cannot build new relationships with others in her new surroundings. Mr. sen is not concern about her difficulty and won’t help her overcome her problem. In the short story ¨A Temporary Matter¨ , the breakdown of Shukumar and Shobha´s relationship is based purely on their failure to communicate with one other. Communication is important in this relationship because following the death of their baby the couple never shared the time to deal with the tragedy. In the short story ¨Interpreter of the Maladies¨, Mr. and Mrs. Das do not communicate because Mrs. Das hides behind her sunglasses most of the time and Mr. Das is reading most of the time in his guidebook. All these frustrated attempts at communicating with one another leads to hurt each others feelings. I think they lack in communication due to Mrs. Das guilt. Throughout the trip she tends to think about her mistake of not telling Mr. Das that Bobby might not be his son.

Gender roles has been seen in a couple of short stories in Interpreter of the Maladies. Women are treated inferiorly to men. A short story that represents this theme is ¨The Treatment of Bibi Haldar¨. The women in this community including Bibi are seen to have no purpose and only be housewives as well as mothers. Bibi is seen as a woman who cannot be successful unless she finds love and gets married. The hatred that bibi receivies by her cousin cannot be fixed by the women community because they have been taught to only have one role which is follow the men’s rule. In an article called ¨Countries and their cultures¨, they state that it is said that a woman must first obey her father, then her husband, and then her son. This rule seems to be the normal pattern as she lives on with her life therefore making her follow it for the rest of her life.

Within these stories we were able to see the connections of assimilation, ethnic identity, and importance of communication. These themes served as a way for the characters to take in new information and incorporate them to their lives. All of these themes were able to make the character realize who their true self was.

Assimilation in Book "Interpreter of the Maladies". (2021, Aug 06). Retrieved from http://studymoose.com/assimilation-in-book-interpreter-of-the-maladies-essay 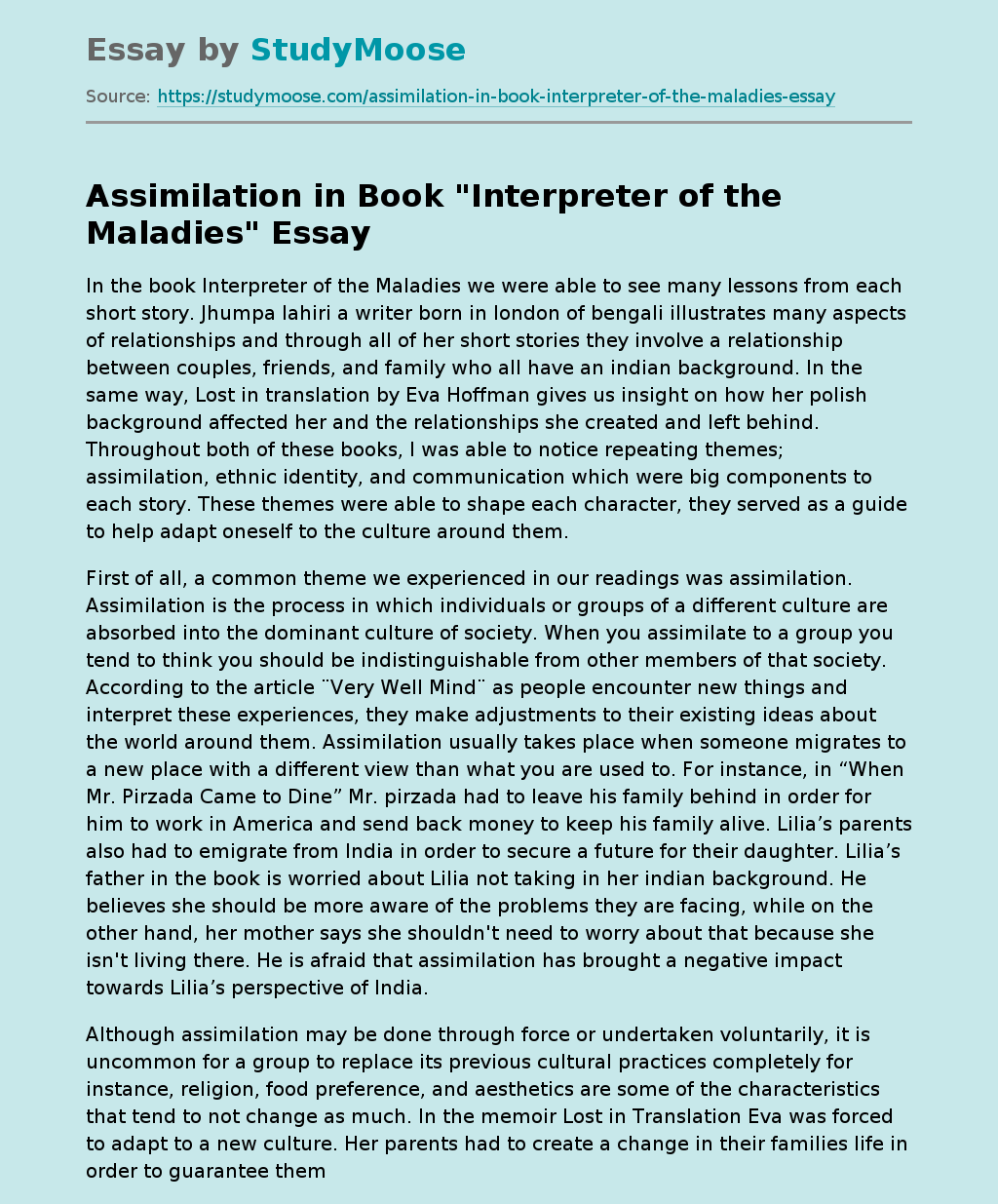