Which Ideal of the Declaration of Independence Is the Most Important?

DBQ
Our American government became independent from Great Britain, on July 4, 1776. There was a committee of five people who wrote the Declaration of Independence. The Declaration has a structure of an introduction, a statement of ideals about government, a long list of grievances against the British, and a Declaration of Independence from Great Britain. Yet the four ideals; consent of governed, Equality, Unalienable Rights, and the right to alter or abolish, are the foundation of our government. Equality is the most important and the reason our government is so successful to this day.

Don't use plagiarized sources. Get your custom essay on
“ Which Ideal of the Declaration of Independence Is the Most Important? ”
Get custom paper
NEW! smart matching with writer

Equality cannot be achieved without Liberty because we need unalienable rights so we can defend ourselves from the government “I believe in Liberty, I believe that within every soul lies the [ability] to reach for its own good.

” stated Andrew Sullivan. Andrew Sullivan stated that everyone has the equal opportunity to reach for the good and their own personal happiness. Although, Andrew Sullivan believed in the journey of the pursuit of happiness he did not believe in the arrival. Unalienable rights give us the equality that makes us people and our government so strong.

I believe the second most important ideal is the right to alter or abolish our government our society and government learn from our mistakes that is why it is so important that we have the right to alter or abolish. People of the Declaration of Tea Party Independence wanted to restore the policy which are proved safeguard liberty and prosperity for all. Without the right to alter or abolish our government we would not be able to be as free and strong as we are today. Our American belief that everyone is equal has given people hope, changed lives and helped people’s dreams come true Diana Pham was from communist Vietnam and lived as boat people trying to survive in their home country. Diana Pham her husband Vi Luu came to Chicago in 1980, the day she arrived she knew her family had endless opportunities to be whatever and whoever they wanted to be. “My daughters, like other Americans, had an equal opportunity to succeed. America has given our family the chance to become whatever we choose to become.” stated Diana Pham. America’s equality changed just one simple immigrant family from Vietnam and is changing so many other immigrants who risk their lives just to come to America and have an opportunity to be whoever and whatever they want to be.

The principle of equality in 1776 meant the most to white rich American males. Our government has changed so much since 1776 that equality means both men and women alike. “We hold these truths to be self-evident; that all men and women are created equal.” Women and men stated at the Declaration of Sentiments in Seneca Falls, New York, in 1948. Today in 2013 women and men have the right to vote, get an education, and have successful careers. The 260 women and 40 men present at Seneca Falls fought for these equal opportunities for both men and women alike.

The four ideals of our government have made our society strong and free. Although without equality the other three ideals would never be possible to succeed. Equality is the foundation to our strong and independent government.

Which Ideal of the Declaration of Independence Is the Most Important?. (2016, Apr 03). Retrieved from https://studymoose.com/which-ideal-of-the-declaration-of-independence-is-the-most-important-essay 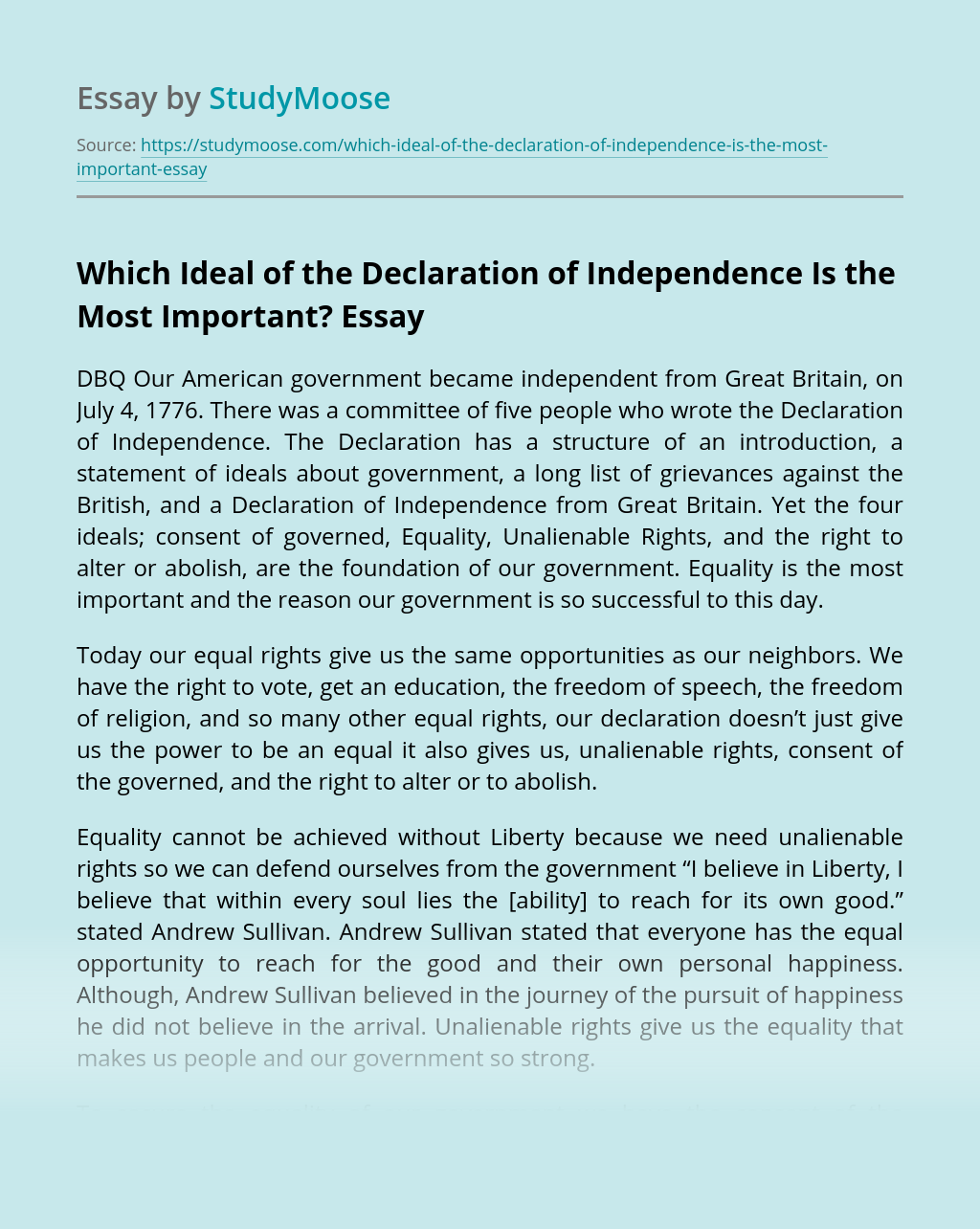