Vesta, The Roman Goddess of Heart and Fire

Vesta is the Goddess of Heart and Fire. Being one of the most popular gods/goddesses of Ancient Rome, she symbolizes “the continuity of the life of the State” (Johnston, par. 488). Being a people of deep religious feeling (Hamilton 45), the ancient Romans embraced gods and goddesses like Vesta into their everyday lives, as they gained in statute and dignity before the eyes of gods and men. Every ancient Roman family has the personification of Vesta in their home, as she is one of the family’s own gods and goddesses.

Don't use plagiarized sources. Get your custom essay on
“ Vesta, The Roman Goddess of Heart and Fire ”
Get custom paper
NEW! smart matching with writer

Vesta is among the gods/goddesses who were “never worshipped in temples, but only in the home, where some of the food at each meal was offered to them” (Hamilton 45). For this reason, Vesta appears to be one of the most lived gods and goddesses of Rome, protecting the heart of the family in order to gain stability, prestige, and dignity. This paper revolves around Vesta, the Roman Goddess of Heart and Fire, and how the Vestal Virgins appear and relate to the ancient Roman state.

After examining the dense issue of how Vesta and the Vestal Virgins appear and relate to the people, it shall be proposed that the appointing of Vestal Virgins do not indicate Ancient Rome’s affinity or high respect with the females in general. Instead, it proposes that females can have an opportunity of having the highest honor within the community if she is true to her duties and her chastity.

Main Text Vestal Virgins Carry One of the Heaviest Responsibilities

Vestal Virgins were associated to possess strong spirits and powers in the ancient state of Rome. As priestess of the goddess Vesta, they carry one of the heaviest responsibilities, as they keep the ‘sacred fire’ in the altar aflame and lingering. As stated in the recent page, this act symbolizes “the continuity of life of the State” (Johnston, par. 488), and this makes it very necessary for the state and the village. Having to protect the ‘home fires’ of the people, Vestal Virgins keep homes stable and flourishing as well, as daughters of the households assist them in tending fires, and then gain stability and permanence.

In the process, the virgins would have to be of noble origin. The College of the Vestal Virgins is composed of 18 members, with 6 members working at a time (Fowler, par. 3). Originally, only the upper class blood were traditionally allowed to be included in the college, but later on, it was approved that daughters of patriarchs and freedman were allowed to join the college (Fowler, par. 3). Handpicking physically ideal girls who were 6-10 years of age and had two living parents (Fowler, par.

At the end of their term—which is exactly 30 years—these women were allowed to get married. However, as stated by Fowler (2006), “[m]any retired Vestals decided against marriage” (par. 4). This is because, according to the Roman tradition, wives were supposed to be under the dominion of their husbands. Having to live almost all of their lives getting prime seats in Roman theaters, attending luxurious dinners and parties, or having the permission to vote… being under the power of a man would be very difficult; thus, they spend the rest of their lives being single.

Another significant responsibility of Vestal Virgins appears during the celebration of Vesta—the feast called ‘Vestalia’, which is an “annual ritual in honor of their patron goddess, Vesta” (Fowler, par. 6). As stated by Fowler (2006), every June 7-15 of the year… “[T]he doors of the Temple of Vesta opened to the mothers of the families of Rome who brought offerings of food to the goddess. The Virgins also prepared special food offerings at this time. This occasion was the only time of year that the doors of the temple were opened to the public.

” (par. 6) In vowing for a powerful position for women in the Ancient Rome, such as being a Vestal Virgin, the religious and political rank carried with it heavy sacrifices and forfeits. Vestal Virgins Carry One of the Heaviest Punishments Lastly, Vestal Virgins carry one of the heaviest punishments in Ancient Rome. Aside from the forfeit and sacrifices that were mentioned above, the virgins carry a chastisement if they failed to comply with their responsibilities in keeping the fire of the family and state aflame.

This spells death and disaster when the member breaks the vow of celibacy, with the execution being given by means of the following strategies: first, by being buried alive; second, by being thrown into the Tibet River; third, by being publicly whipped (Fowler, par. 5). Aside from her failure to keep her celibacy and chastity, another grave destruction for a Vestal Virgin is when she fails to keep the ceremonial fire inside the Temple of Vesta. It is, indeed, an appealing way of life, as dictated by Fowler (2006, par.

4)… but the responsibilities are grave and the punishments are nothing but life threatening. Conclusion Vesta and her Vestal Virgins relates and serves to the families and state of Rome by doing the following: first, by keeping the sacred fire aflame and burning; second, by keeping the home fires stable and flourishing; third, by sacrificing to a life of chastity and celibacy; fourth and final, by keeping the feast of Vestalia alive within the state.

However, as the life of Vestal Virgins reflect one that is full of responsibilities, sacrifices, and punishments… it is evident that the appointing of Vestal Virgins does not indicate Ancient Rome’s affinity or high respect with the females in general. Instead, it proposes that females were given the chance to live a life that only the males were given privilege in the ancient world. If she remains true to her word, her chastity, and her responsibility, then she gains all the respect, dignity and power that only a few citizens were able to obtain.

It is true that ancient women of Rome were more privileged in 700 B. C. , but still, life and existence are always at stake. It was 37 years after the founding of Rome that Romulus—one of its founders—was said to have disappeared in a thunderstorm (Bingley, par. 1). Having no king, Numa Pompilius was elected as king of the state, who then appointed priests, pontifices, flamines, the Salii… and the Vestal Virgins who, since then, took charge of fire and water (Dio 3).

Vesta, The Roman Goddess of Heart and Fire. (2017, Mar 04). Retrieved from https://studymoose.com/vesta-the-roman-goddess-of-heart-and-fire-essay 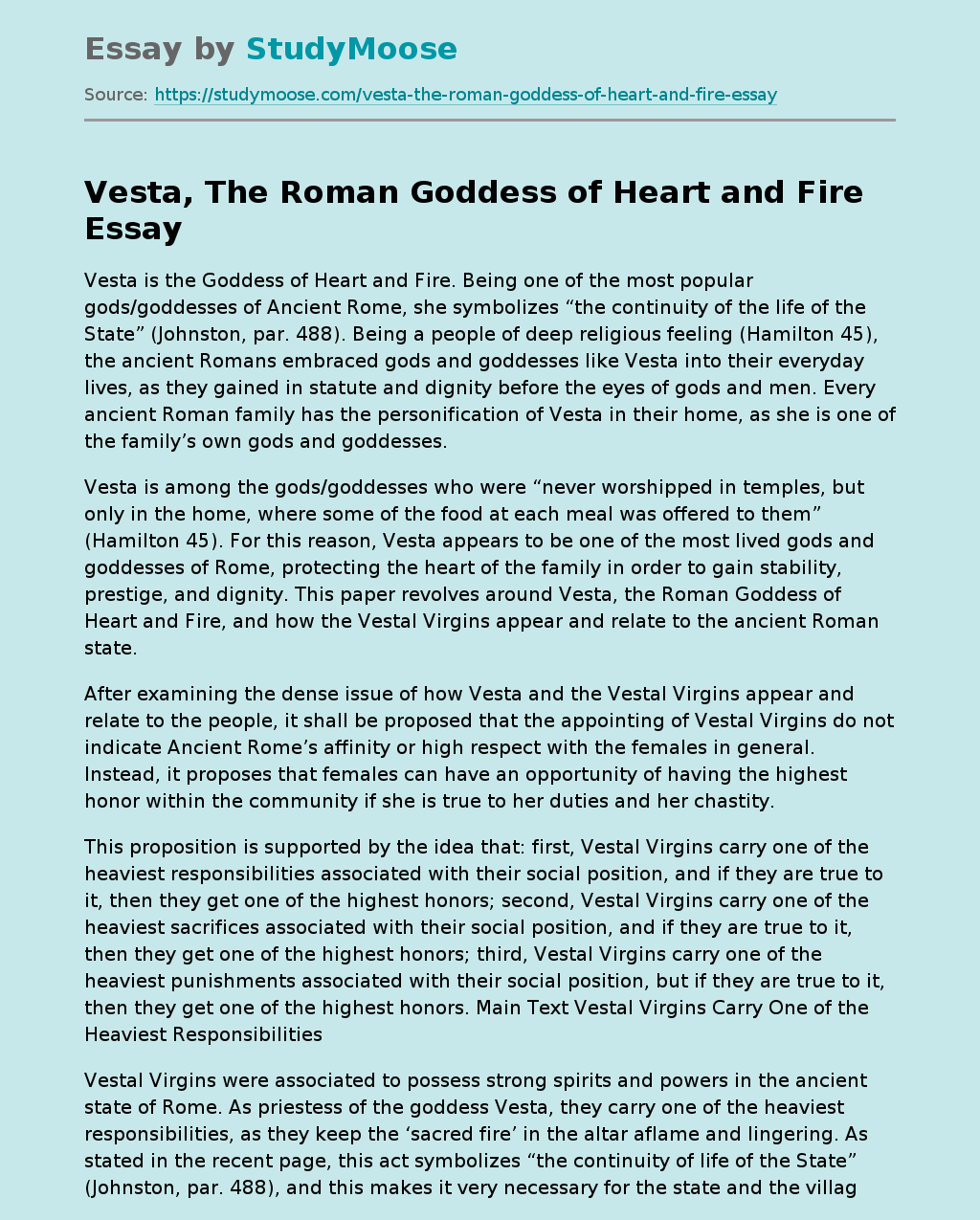