Similarities and Differences between Greek and Roman Arts

Greek and Roman arts are both classified as classical art. Although Greek art is categorized into four phases, geometric, archaic, Hellenistic and classical, it is only the latter that had major influence and became the antecedent for the western art culture. Therefore, classical art in Greece was the primary influence on the Roman art. After the Greek empire fell to the romans in 146 B.C., they adopted all aspects of Greek art and architecture. However, they molded the borrowed techniques of the Greeks to create art that catered to their own distinctive values and ideals.

Don't use plagiarized sources. Get your custom essay on
“ Similarities and Differences between Greek and Roman Arts ”
Get custom paper
NEW! smart matching with writer

The similarities and differences of Greek art and Roman art can be looked up in three major areas: sculpture, painting and architecture.

Similarities between Greek and Roman Art

Greek and Roman arts share a lot of similarities to the point that it is hard to separate the two forms of art. This is true because Roman art borrows greatly from the Greek art. Many works of art that have been believed to be Roman are actually replicas of Greek artworks.

Romans were fully influenced by Greeks and they copied every aspect of Greek art from sculpture to architecture. It is due to this reason that Roman art is not highly regarded as the Greek’s. While the Greeks sought to explore spiritualism and surreal idealism, the Romans were more inclined towards realism. Roman art system was therefore the precursor to the decline of intellectualism in art in the ancient western culture.

Differences between Greek and Roman Art

While Roman art shares a lot of similarities with Greek art, there are differences that separate the two artworks.

One of major difference between the two cultures is their approach towards art. The Greek were more philosophical and idealistic, while the Romans were more realistic and somehow extravagant in their approach to sculpture. Greeks showed great intellectualism in their art. Starting from the protogeometric period, it is evident that intellectual thought had taken root in Greece. Artists displayed their knowledge of mathematical principles during this period by decorating vases with geometric shapes and symmetrical patterns.

This advanced thinking was extended to the geometric period, which saw artists’ fascination with other patterns, such as zigzags, triangles and linear designs. Eventually, they settled for idealized version of the perfect human body that would act as a representation of both man and gods, during the classical and Hellenistic periods. Idealism of human perfection saw Greek artists enhance their sculptures to look more beautiful, athletic and youthful. Male sculptures were generally in the nude, while females were draped. Although Romans copied every aspect of Greek artistry with regards to details of the human anatomy, they leaned towards realism.

Artistry in Rome was generally for the glorification of the Roman emperors. Therefore, Roman artists did not strive to create perfect representations of human forms. They created real sculptures of emperors, putting into considerations their flaws as human beings. However, they exaggerated the pieces of art to showcase the mighty power of their rulers. This generosity of the artists ensured that the emperors were depicted as divine human beings with extra ordinary powers. It can therefore be assumed that artistry in Rome was used as a propaganda tool to overinflate the powers of rulers to be feared by their subjects. The only difference between the two is that the Roman sculptures were not made in the nude, but rather clothed with a lot of armour.

When it came to painting, Romans had the upper hand. Painting was a popular form of art in ancient Rome. They painted both murals and portraits. Mosaics were made for the floors, while portraits were made to decorate walls. Portraits were made up of images of prominent people and important events. On the other hand, Greeks did not practice painting or if they did, there are no survivals of Greek painting in existence today. Greek painting was only limited to vase paintings.

In the protogeometric period, the vases were painted with abstract geometric forms, such as triangles, circles and linear forms. They subsequently changed to real images of humans in burial processions during the geometric period. These vases were used in burial ceremonies and were referred to as amphora. While the Roman murals were rich in color and hue, Greek vases were made of black and red colors only and were only simple depictions of humans and animals.

Roman architecture was also influenced by the Greeks. Both architectural types had the ‘post and lintel’ style of building, which basically involved using columns held together by a lintel with an entablature on top. The columns were carved beautiful in the Greek architecture to form three designs: the Doric, Ionic and the Corinthian. The Corinthian was the most adapted design among Roman architects. The Romans however developed the Tuscan and the composite designs, which were all influenced by the Greek designs.

The first difference between the two architectural styles was the material used in their construction. The Greek favored marble and limestone, as these were readily available in Greece. The Romans on the other hand perfected the use of concrete in their buildings. Although they occasionally used marble and limestone, the main structure was made from concrete, while marble and limestone were used for decorative purposes. Concrete proved to be the best building material, as Roman structures are still in existence, while Greek buildings have been wiped out.

Another difference was the purpose of the buildings. Greeks made buildings to honor their gods. As a result, their buildings had less impressive interiors, but beautiful exteriors. Romans loved pleasure, prestige and wealth. They therefore constructed lavish buildings to echo their pleasurable pursuits. When it came to construction design, Greeks perfected the ‘post and lintel’ design. The Romans added the arch and the dome to their buildings, which were absent in Greek designs.

Greek and Roman arts form an integral part of history, as they are regarded as the precursors to modern art, architecture and sculpture. Although Roman art borrowed heavily from Greek art, it formed the basis of western culture. In terms of painting and sculpture, western civilizations adopted the realist approach of Romans by capturing whatever was within their immediate environment in paintings and sculptures. The Romans also created the blueprint of modern architecture with concrete being the primary form of building material. However, all credit goes to the Greeks who founded all the tenets of modern society.

Similarities and Differences between Greek and Roman Arts. (2018, May 31). Retrieved from https://studymoose.com/similarities-and-differences-between-greek-and-roman-arts-essay 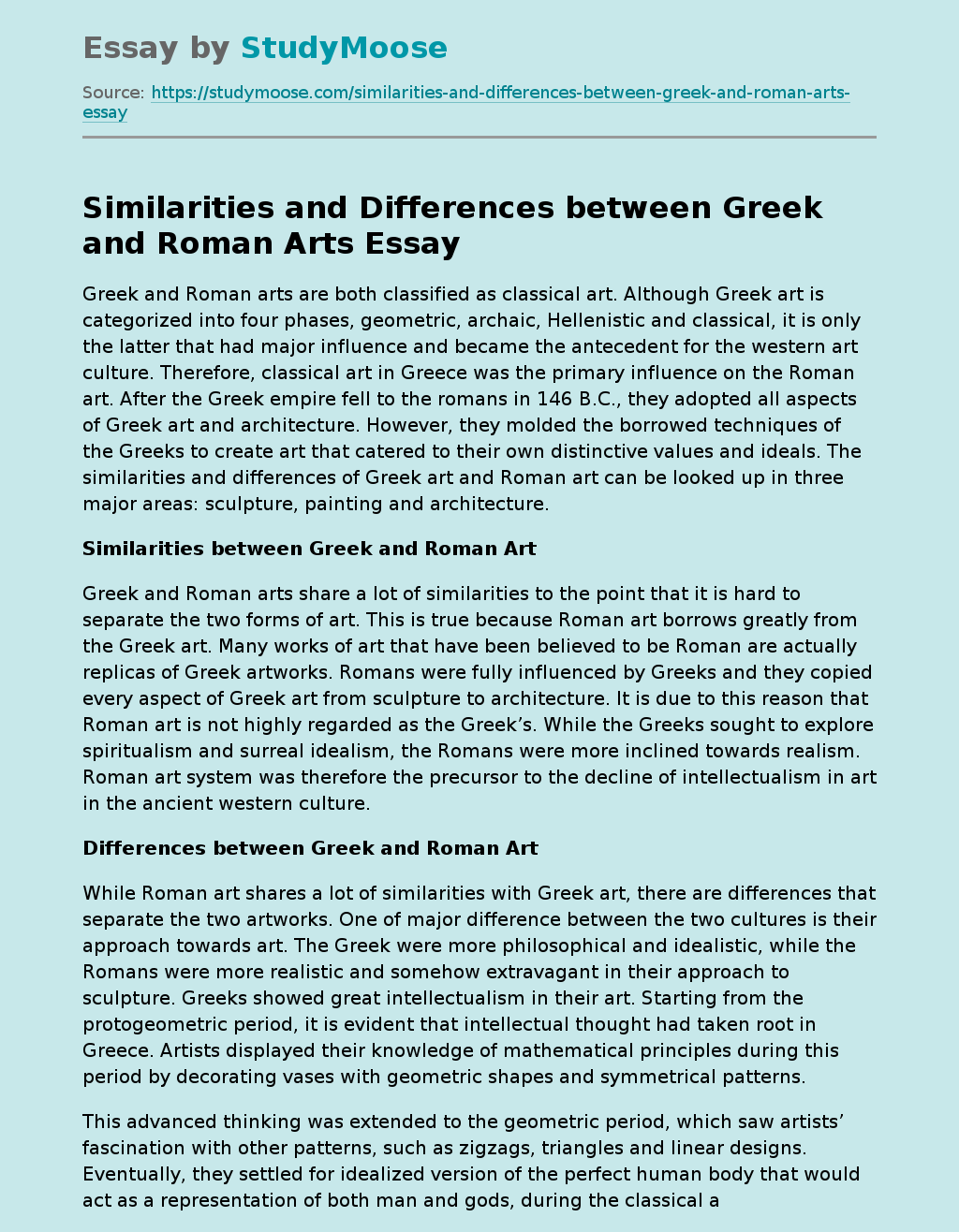