How you ever noticed how many Mythological places or figures are used in the names or logos of companies today? Although many people don’t believe in the Greek and Roman gods, they are very famous, or sometimes infamous, because of their fascinating stories. Many business owners use mythological figures to help portray their company’s product or service. Gillette Venus, for example, bases their name off of the Roman goddess Venus, also known as the Greek god Aphrodite.

Turn in your highest-quality paper
Get a qualified writer to help you with
“ Mythological Companies: Gillette Venus ”
Get high-quality paper
NEW! AI matching with writers

The Roman goddess Venus is the goddess of love and beauty. She’s known to have come from the sea, but is the daughter of Jupiter and Dione. Venus was by far the most beautiful of all of the gods, so it’s said that Jupiter married her off to Vulcan, the lame and ugly smith god. Vulcan used his skills to make her lavish gifts, that only made her more irresistible to the other gods. Her attributes were said to be the dove, the swan, the pomegranate and the lime tree.

With her comes beauty and love, and without her there is no happiness or good things.

In Homer’s Iliad, Venus (Aphrodite) is portrayed as a meek and docile god, but in later poems she’s shown as a force to be reckoned with, with her powerful persuasion over men. Venus usually got what she wanted through the power of her beauty, love, and seduction. In Greek mythology, Aphrodite is known as a central figure in the Trojan war.

The story begins with the competition between Aphrodite, Hera, and Athena, over a golden apple. (the fruit of temptation) The golden apple was supposed to be given to the fairest of the gods, and since Zeus couldn’t choose between the three goddess, he gave the responsibility to the Trojan Prince Paris. While Hera and Athena bribed the prince with power and glory, Aphrodite offered him the love of the most beautiful woman in the world, Helen of Sparta. The deal caused Aphrodite to be reigned the fairest, but it also was the cause of the Trojan war. Gillette is a company that is known for hygienic products like razors and antiperspirants for men. But, Gillette has a branch of it’s company that’s made specifically for the needs of women, called Gillette Venus. Gillette Venus makes very well known razors, that can make women feel confident in the softness of their skin.

Their catchphrase is “Find the goddess in you.”, urging women to find the confidence in their inner goddess. Gillette Venus works with powerful female celebrities, in their fundraisers and programs. Gillette Venus has it own fund called the ‘Venus fund for education’, helping young women get into colleges with scholarships. The ‘Venus fund for education’ works with many celebrities, including their spokesperson Jennifer Lopez. Gillette Venus works hard to show women young and old, that there’s a goddess like Venus in everyone. Venus is a very powerful and confident goddess. What women wouldn’t want to be called a Venus herself? This makes Venus the perfect god to name a company after. It creates an invisible sign that says “If you use our product, you’ll look like Aphrodite herself.” which makes if very appealing to the female eye. Venus reminds us of love and beauty, so a product named after her reminds us of the same. Plus, the company works to make women feel confident and beautiful about their body. Gillette Venus uses their powerful goddess as a way to tell women that everyone is beautiful, and everyone has an inner goddess like Venus. Before my research, I had no idea that Gillette Venus was named after a Roman god. Many people today overlook the presence of Mythology in the world today. Recognizing the mythological figures in businesses helps us to identify key facts about the business and its product. Gillette Venus uses a Roman god to make their product more appealing, and help women feel confident in their beauty. Mythological references are everywhere, can you find some? 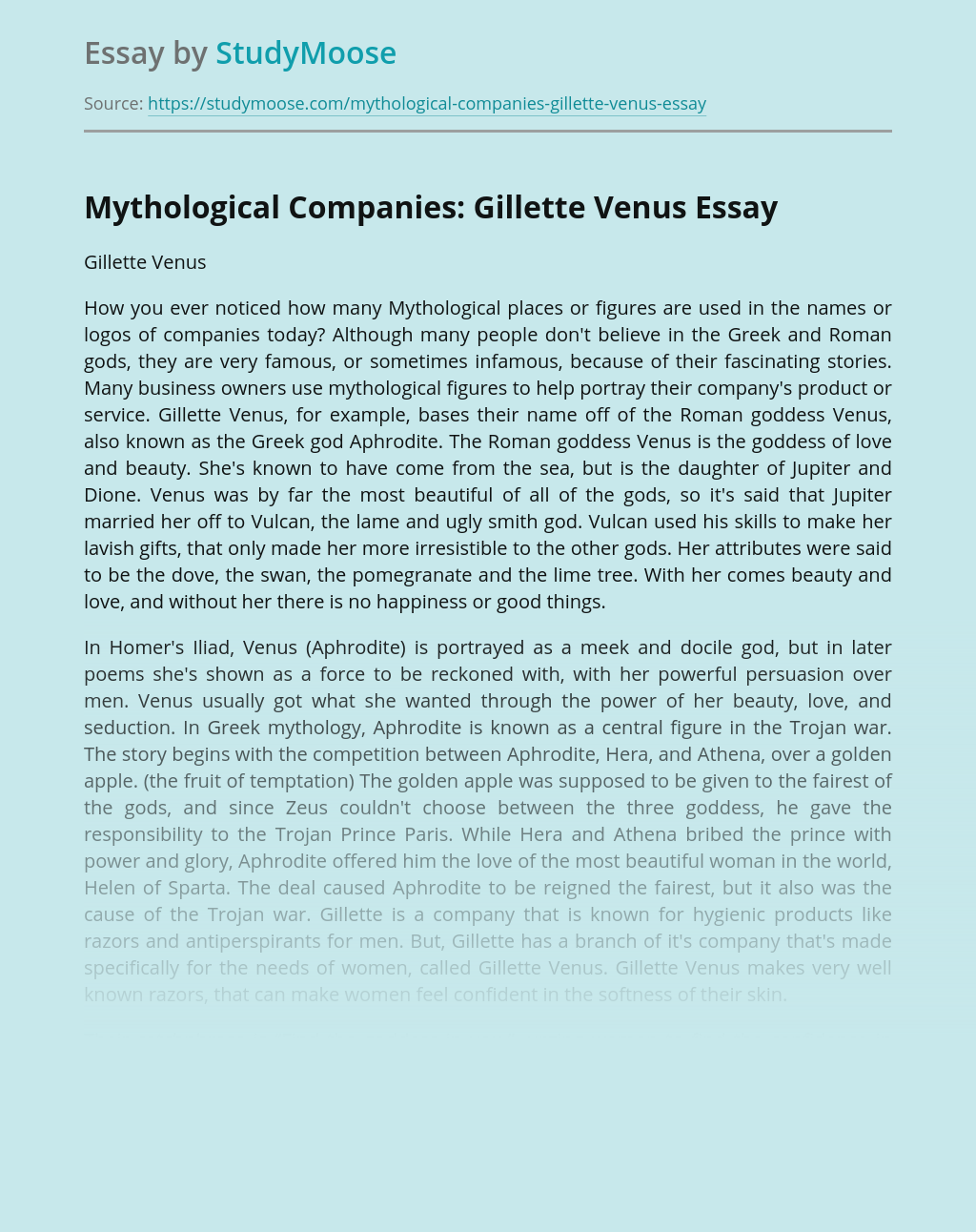 Turn in your highest-quality paper
Get a qualified writer to help you with
“ Mythological Companies: Gillette Venus ”
Get high-quality paper
Helping students since 2015
Stay Safe, Stay Original