The Birth of Venus-Sandro Botticelli

Sandro Botticelli has created this Tempura on canvas painting , it measures 172.5 x 278.5cm and is located in the Galleria degli Uffizi in Florence .The Birth of Venus belongs to the renaissance period and is not a representation of a Christian legend but an interpretation of a classical Myth. This painting is one of a series which Botticelli was inspired to paint after the written descriptions by the 2nd century historian Lucian. It depicts the classical goddess Venus emerging from the water on a shell , she is being blown towards shore by the Zephyrs (symbols of spiritual passions) there is also an Ore waiting on shore to distribute her with a purple flowered cloak.

Its function is to communicate of point of view , as to how the Greek goddess ,Venus, was created. Botticelli has used line and tone to create the effect of a 3-dimensional shell ,the shell appears to be gliding along the top of the water The Birth of Venus is a linear one, yet Venus is depicted with very soft lines, separating her from the rest of the figures.

He has also used a repetitious form of brush-work to create the textured effect of choppy water.

The central figure of Venus is slightly moved to the right of the centre line ,while the figures have magnificently drawn outlines and almost appear to be cut-outs placed on an ideal background .At a glance ,Venus is so beautiful that we fail to notice her imperfections; the unnatural length of her neck ,the steep fall of her shoulders and the unusual way her left arm is attached to her body remain unobtrusive.

There seems to be a build up of water around the base of the shell suggesting movement and her location in relation to the shoreline. The focal point of the artwork is definitely the central figure of Venus; she appears to be emphasised more-so than the other figures. She appears to have a whiter skin tone and she also looks slightly larger than the three other characters. The naked goddess may not be a symbol for earthly love but perhaps a symbol for love in the spiritual form.

In classical antiquity, the sea shell was a symbol for a woman’s vulva. This artwork can be interpreted through the Cultural and Subjective frames , it requires the viewer to react to the piece and reflect on Greek mythological culture. The artwork is a reflection and a communication of a point of view on the classical myth – The Birth of Venus. “Anadyome” meaning “rising from the sea” ; this was the title previously used for Botticelli’s painting ,”the Birth of Venus” only became its better known title in the 19th century.

Time has changed the meaning of Botticelli’s painting ;nowadays we understand more about the Greek mythological period and the effects this has on the painting.Reproductions and variations on Botticelli’s famous painting have been numerous in popular culture, including in advertising and pictures. The birth of Venus has been an extremely influential piece in the history of art from the renaissance period . A scene in the 1962 James Bond film Dr. No with Ursula Andress rising from the sea was inspired by the painting. The scene was recreated in more detail in the 1988 film The Adventures of Baron Munchausen, with Uma Thurman as Venus. A stylised face of Venus is also on the 10 cent Italian euro coins. 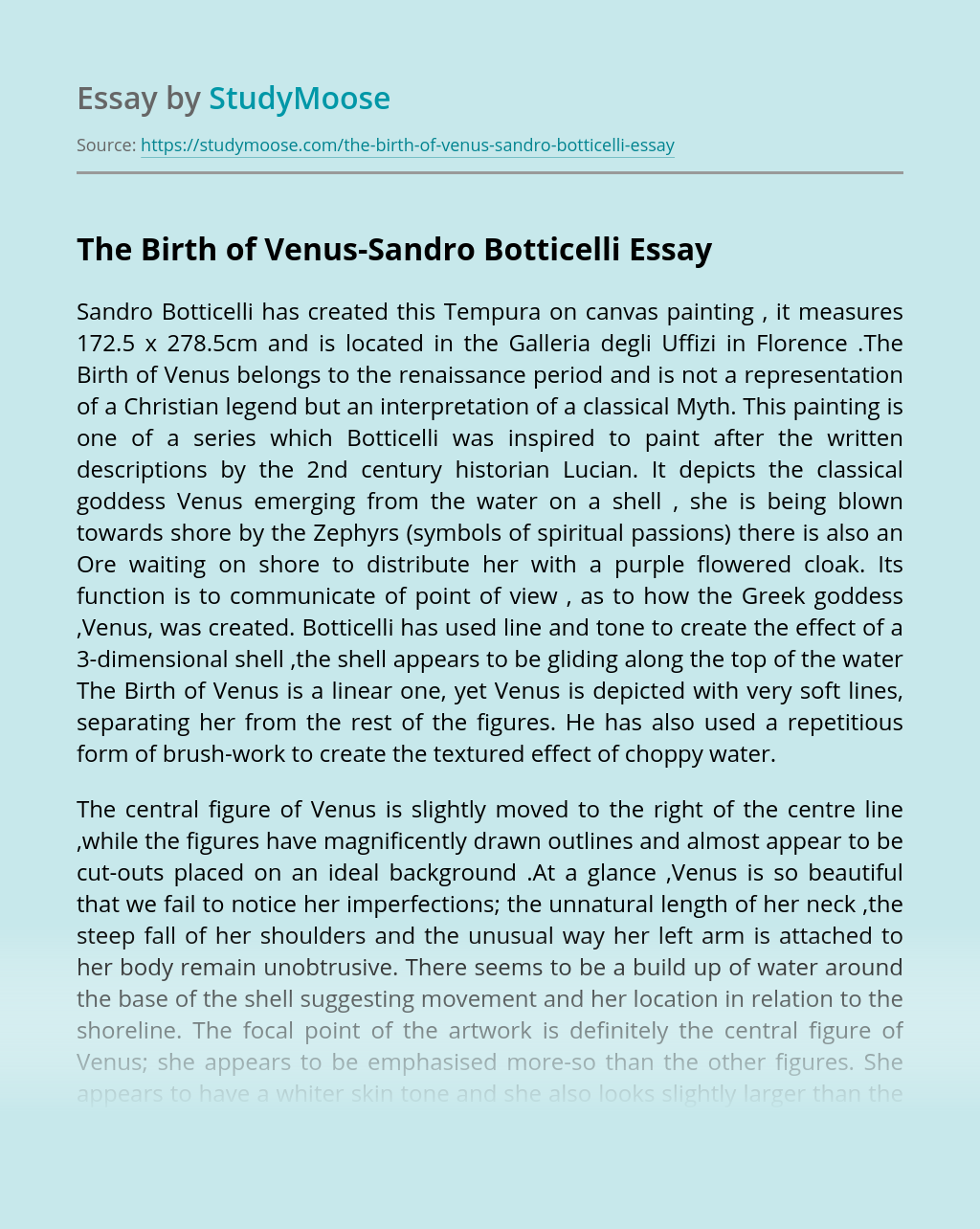 Don’t waste time
Get a verified writer to help you with The Birth of Venus-Sandro Botticelli
Hire verified writer
$35.80 for a 2-page paper
Stay Safe, Stay Original