Modern Cinema Is a Boon

Cinema is a major source of recreation in most countries of the world especially in India where the majority of people live below poverty line. It provides us with entertainment and sometimes educates us too. Depending on the quality of films produced by the directors, one could label cinema as a curse or a boon. Bombay is the main centre of film city. Films are mainly produced in Bombay. There are hundreds of them produced every year. India is known to be the highest producer of movies in the world.

Indian cinema provides us with a good view of the glamour and glitter of the affluent Indian society and also the poverty and misery in the slums of this country. Hence, it more or less, with a few exceptions, presents a fairly authentic picture of the lives of Indians. It educates the public with the help of stories that depict conflicts between the good and the evil in our society.

There is some sort of a moral lesson behind these stories and the society is often greatly influenced by these values.

Some of the stars acting in film become role models for the youth who are usually quite impressionable at their age. Hence, a great responsibility lies with the makers of cinema. They have to form their ideas after careful research and thinking and the public too has to be able to sift out the best from the film, if at all they want to be influenced. But the cinema can become a curse when the movies are full of mindless sex and violence.

This could colour the mind of the young boys and girls who watch these movies with great interest. Cinema can become an addiction and these films could sometimes distract the youth so much that they might lose interest in their studies and other work that requires serious concentration.

Cinema has an attraction that one often finds young boys and girls getting so attracted to the cinema that they begin to harbour a craze about joining the film industry themselves. Very few talented people make a name for themselves in the tinsel world and quite a few unfortunate ones waste many a precious year trying to make it big in that world of money and glamour. The cinema can remain a boon for us as long as those who view it keep a balance between what they believe in and what the cinema may be thrusting down their throats. Cinema should be enjoyed and used as a means of correct entertainment and education.

Modern Cinema Is a Boon. (2016, Nov 17). Retrieved from http://studymoose.com/modern-cinema-is-a-boon-essay 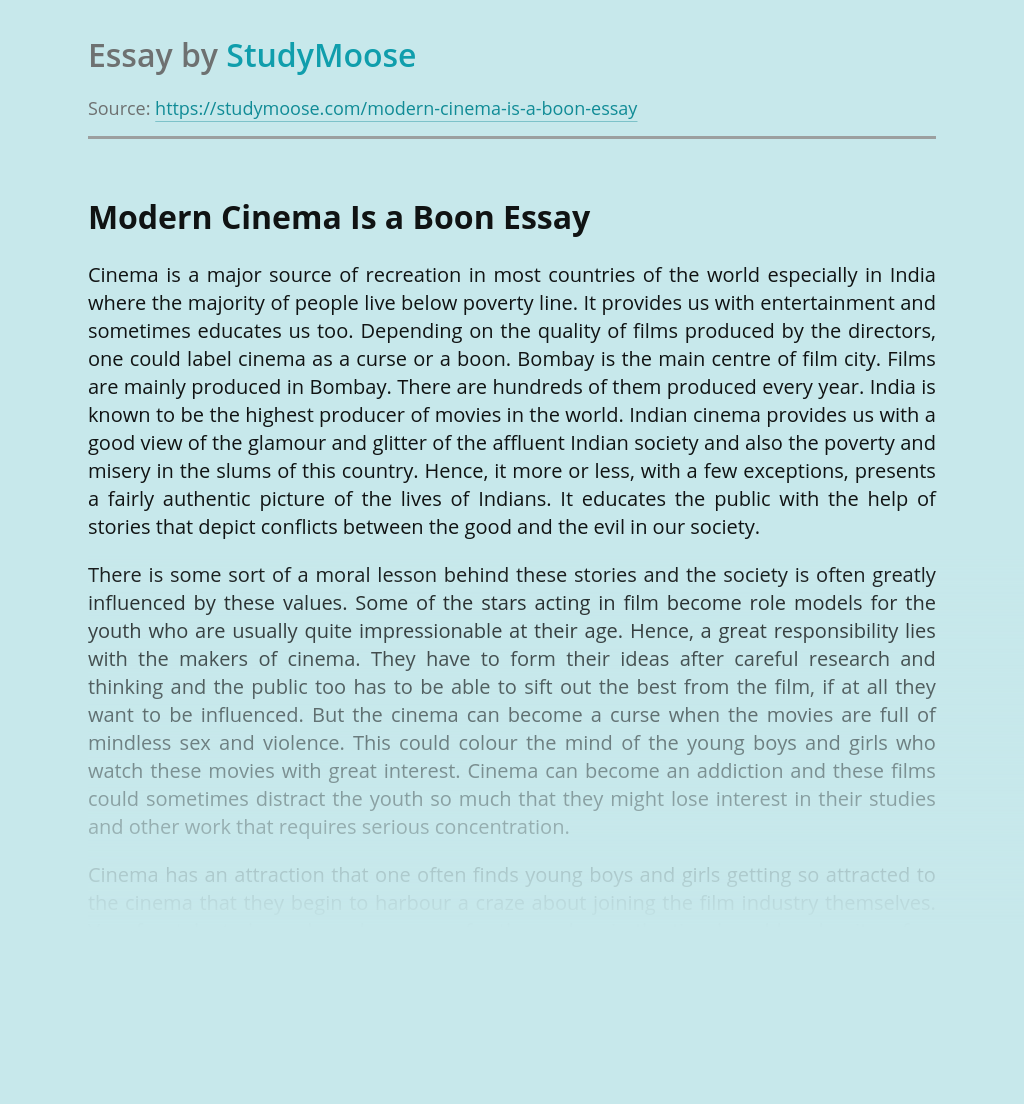 Don’t waste time
Get a verified expert to help you with Modern Cinema Is a Boon
Hire verified expert
$35.80 for a 2-page paper
Stay Safe, Stay Original