Health tourism,a boon or a curse

Health Tourism (Also known as Medical tourism) refers to the act of traveling to a foreign country in order to receive medical care. Varying reports based on the US alone put the number of American patients seeking healthcare abroad between 500,000 to 750,000 in 2007. This is a steady increase from 2006 in which medical experts believed as many as 200,000 to 1/2 a million Americans traveled out of the country for medical procedures. These figures indicate a significant growth in the industry, currently a $20 billion market, which can reach $100 billion by 2012.

Turn in your highest-quality paper
Get a qualified writer to help you with
“ Health tourism,a boon or a curse ”
Get high-quality paper
NEW! AI matching with writer

Governments in places such as India and Malaysia (as well as some others) are already getting involved and investing in this growing industry. The main reasons that people travel to receive medical treatment are: Certain medical services are not available in their country of residence. Their health insurance does not cover the full cost of a procedure. Wait lines are too long. Quality of care is better in a different country.

Costs are lower in a different country. (even when factoring in the travel arrangements) Medical tourism is a growing sector in India. India’s medical tourism sector is expected to experience an annual growth rate of 30%, making it a $2 billion industry by 2015.[1][2] As medical treatment costs in the developed world balloon – with the United States leading the way – more and more Westerners are finding the prospect of international travel for medical care increasingly appealing. An estimated 150,000 of these travel to India for low-priced healthcare procedures every year.[3] Advantages for medical treatment in India include reduced costs, the availability of latest medical technologies,[4] and a growing compliance on international quality standards, as well as the fact that foreigners are less likely to face a language barrier in India.

The Indian government is taking steps to address infrastructure issues that hinder the country’s growth in medical tourism. The government has removed visa restrictions on tourist visas that required a two-month gap between consecutive visits for people from Gulf countries which is likely to boost medical tourism.[5] A visa-on-arrival scheme for tourists from select countries has been instituted which allows foreign nationals to stay in India for 30 days for medical reasons.[6] In Noida, which is fast emerging as a hotspot for medical tourism, a number of hospitals have hired language translators to make patients from Balkan and African countries feel more comfortable while at the same time helping in the facilitation of their treatment.[7] Confederation of Indian Industry reported that 150,000 medical tourists came to India in 2005, based on feedback from the organization’s member hospitals. The number grew to 200,000 by 2008.

A separate study by ASSOCHAM reported that the year 2011 saw 850,000 medical tourists in India and projected that by 2015 this number would rise to 3,200,000.[8] Most estimates claim treatment costs in India start at around a tenth of the price of comparable treatment in America or Britain.[9][10] The most popular treatments sought in India by medical tourists are alternative medicine, bone-marrow transplant, cardiac bypass, eye surgery and hip replacement,dental treatment. India is known in particular for heart surgery, hip resurfacing and for dental treatments at cheap prices. Lower treatment cost does not necessarily mean lower healthcare standards. There are 18 JCI accredited hospitals in India.[11] However, for a patient traveling to India, it is important to find the optimal Doctor-Hospital combination. After the patient has been treated, the patient has the option of either recuperating in the hospital or at a paid accommodation nearby.

Many hospitals also give the option of continuing the treatment through telemedicine. The city of Chennai has been termed India’s health capital. Multi- and super-specialty hospitals across the city bring in an estimated 150 international patients every day. Chennai attracts about 45 percent of health tourists from abroad arriving in the country and 30 to 40 percent of domestic health tourists. Factors behind the tourists inflow in the city include low costs, little to no waiting period, and facilities offered at the specialty hospitals in the city. The city has an estimated 12,500 hospital beds, of which only half is used by the city’s population with the rest being shared by patients from other states of the country and foreigners.

Dental clinics have attracted dental care tourism to Chennai[17] India’s annual earnings through Medical Tourism is all set to double to 8000 Crore Rupees [2000 million US dollars] by year 2012 according to a recent study. The main reasons the study claims why medical tourism would flourish in India include much more lower medical costs for various surgical procedures such as bone narrow transparent, coronary bye-pass surgery, knee transplant and liver transplant as compared to western countries and even many of the Asian countries. Very good medical infrastructure not only in large Metros but also in tertiary towns is another reason for medical tourists favouring India.Availability of highly qualified medical professionals and nurses gives them the confidence to do such major procedures here. The disadvantages are:

It make health sector highly commercial and the common man in the country will be hard pressed for medical care; 2) All the resources of health sector will be thrown open for the international tourist so much so that even the so called middle class will be able to ill afford the medical care. 3) Patients from overseas, if they come in droves, may bring in new types of diseases and the risks of infection. 4) In the name of medical tourism, many people who want to enjoy themselves in this country, with the ostensible intention for treatment in this country, may turn the hospitals into merry making resorts and convert the hotels into hospitals.Tourism has its own benefits as well as demerits.

Health tourism,a boon or a curse. (2016, Apr 13). Retrieved from https://studymoose.com/health-tourisma-boon-or-a-curse-essay 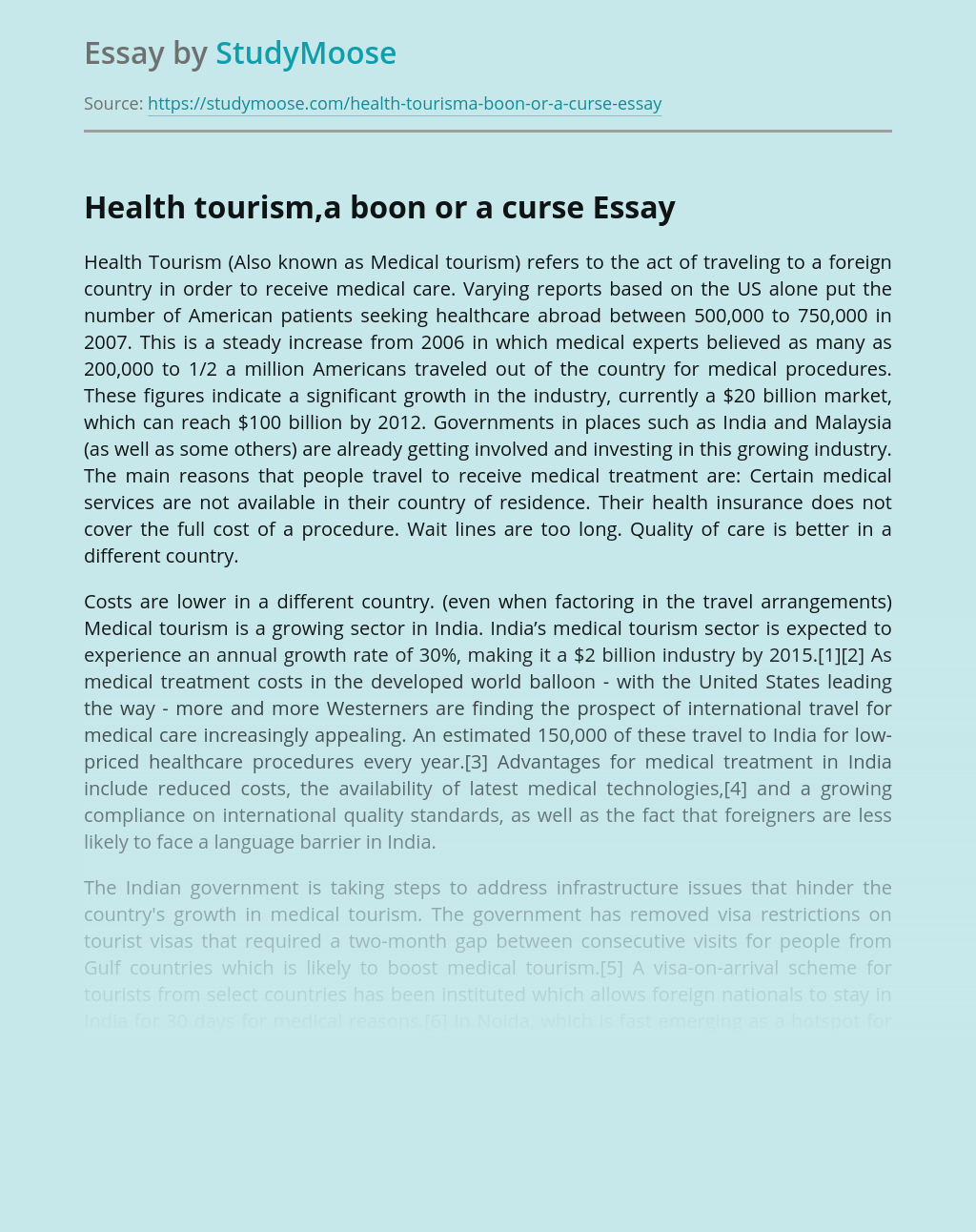 Turn in your highest-quality paper
Get a qualified writer to help you with
“ Health tourism,a boon or a curse ”
Get high-quality paper
Helping students since 2015
Stay Safe, Stay Original