When a girl is getting married what is one of the most important tasks to attend to first? Why the dress of course! Oscar de la Renta, Dior, and Vivienne Westwood all create beautiful bridal. However, the designer that comes to all brides’ minds first is Wang. Vera Wang that is. Vera Wang is with out a doubt the most desirable designer for wedding dresses than any other designer in the world. Getting her start in the fashion world as an editor, Vera Wang has transformed the idea of Bridal from conventional and habitual to innovative and fresh.

Don't use plagiarized sources. Get your custom essay on
“ Vera Wang ”
Get custom paper
NEW! smart matching with writer

New York City born and raised, Vera Wang grew up as a figure skater. After being the senior fashion editor at Vogue for over 15 years she began working with Ralph Lauren. Vera Wang made this drastic move after not receiving the promotion she had hoped for to editor in chief to the publication, the position was given to Anna Wintour. At Ralph Lauren Wang was the design director of Women’s Accessories.

Then Vera got proposed to, and this changed her career path completely. Vera Wang also accredits her love of fashion to her mother. She also says that her mother is her prime influence in design.

After getting engaged Vera had decided she wanted to design her own wedding gown. She was extremely frustrated with the lack of couture gowns on the market. With the help from her mother this happened. After enjoying the experience more than she ever imagined, Vera’s father saw a pioneering investment arise.

The salon was located at the esteemed Carlyle Hotel in New York City. When the salon first opened Vera sold her own personal gowns along with couture gowns from designers such as Carolina Herrera, Christian Dior, and Arnold Scaasi. After a few years of owning the salon Vera Wang launched her own signature collection of bridal couture. Although Vera Wang was widely known and accredited by socialites, celebrities, and the fashion world. She did not receive her international public recognition until 1994. In that year she designed a hand-beaded ensemble for figure skater Nancy Kerrigan.

I believe that Vera Wang really captured the zeitgeist of the era with that design. The zeitgeist of America as a country is patriotism, and what’s not more patriotic then designing for and American figure skater. The design is also very bright, modern, active, and youthful, just like the United States in the 1990’s. Vera Wang has said that this design is one of her favorites because it took figure skater, Nancy Kerrigan, out of her comfort zone as a sophisticate. Vera Wang has a significant impact on contemporary fashion.

As a designer Vera has expanded the fashion in the worlds of both bridal and figure skating. After Vera launched her own collection of solely wedding gowns many designers followed in her footsteps. Before she has done this most designers would only design and produce wedding gowns made to order. Bridal fashion would certainly be different without Vera Wang. She created a whole other sector of bridal; she created ready to wear bridal couture in a sense. She made avant-garde attainable to other members of society who normally did not have access to that art.

This was something never done before so it was definitely profitable. Designers became aware of this and decided to get in on the new sector of bridal. I have attended Teen Vogue Fashion University the past two years. Last year I had the pleasure of attending a seminar put on by Vera Wang. During the seminar the designer gave her life story and discussed how she came about in the business. I learned that she has designed for tons of celebrities and royalty. Some including Jennifer Lopez, The Kardashians, Sharon Stone, and Uma Therman.

What I find most interesting about Vera Wang is how she sought out a market and created a product for it. I think that is exactly what makes individuals in this industry successful. Her story and launch of her company was very logical and almost made my dreams seem more attainable. In conclusion through Vera Wang, and other designer’s, biographies we can learn how styles evolve. Learning about how a designer decides on a specific style or design is very similar to how style and fashions have altered over history. Many designers in the past have used utility as well as aesthetic appeal as a reason to create new fashion.

In today’s time most designers create new things for aesthetic appeal and they would like to create something new and cutting edge. Vera Wang started creating couture gowns because that was her passion. She then expanded into Ready to wear and fragrance. This is a clear indicator that designers today are driven for more of a profit then those in history. Through the study of historic costume we not only learn about garments, but we also learn about history itself. From a specific garment students may be able to identify if the garment was produced during a ration of a certain fabric.

Studying historic fashion may also identify what was going on in the world at the time a specific garment was worn. Different needs throughout the generations can also be identified through the types of fashions that are displayed. I also observed that, like in history, Vera Wang builds on previous ideas from other designers. Throughout the study of historic costume it is sound to say that many of the fashions are repeated but yet improved, this mirrors fashion today exactly. History is constantly in cycle, as is fashion. 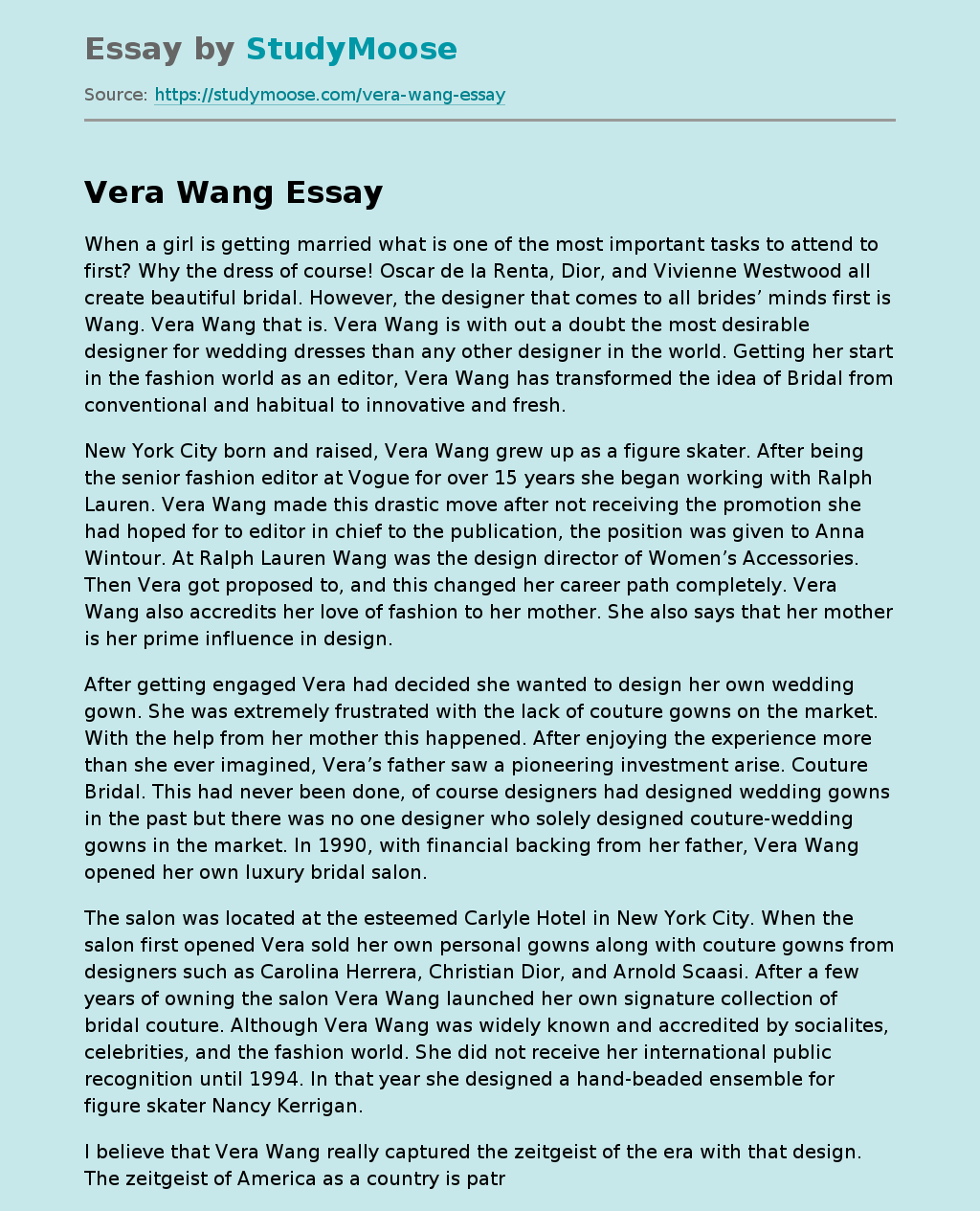