In the past thirty years, humans are witnessing a huge revolution in the genetic engineering industry. Having identified most of the Human Genome, gene sequencing has become programmed and extremely fast, and laboratory techniques in molecular biology allow for in-vitro fertilization and transfer of genetic material. Gene therapy and repair based on stem cells research allows for replacement of a defected allele in the DNA, and even a whole damaged tissue in the patient. In general, it is accurate to say that genetic engineering is a controversial topic about which people tend to have strong opinions.

Don't use plagiarized sources. Get your custom essay on
“ Utilitarianism and Genetic Engineering ”
Get custom paper
NEW! smart matching with writer

The genetic engineering issues that mainly catch the attention of the moral community involve the pre-birth improvement of human fetuses. The ability to screen for detectable diseases is already available in the laboratories. Fertility clinics are also currently able to satisfy the need of a couple for conceiving a male or female child, following the parents’ request, but this is routine compared to the potential of genetic engineering, whose avant-garde aim is the selection of specific traits such as hair color, height and even intelligence.

It is this selection that is the most fascinating upshot of advances in genetic engineering, but also the most difficult genetic issue facing the moral society. In this essay, the ethical analysis applied to debate human genetic engineering is the Utilitarianism theory. The Utilitarian method seeks to maximize the utility of an act or a rule while minimizing the pain that could possibly be caused. Utilitarian principles are the foundation of many US policies, especially those that deal with economics and trade (1, P4, Williams, 1999).

Utility is very tightly linked to efficiency and productivity, and maximum efficiency classically concurs with maximum utility. However, a Utilitarian argument can seem imperfect when dealing with concerns of justice and personal rights, which is the case with the genetic engineering affecting the very intimate identity of each individual. That is exactly what this essay is meant to prove. Delving more deeply in the basic elements of Utilitarianism, it is commonly identified as a consequentialist theory. It targets some end goal and estimates the morality of the actions in progress toward that goal.

This theory defines morality as the maximization of net expectable utility for all parties affected by a certain decision or action. Many forms of utilitarianism have been suggested and deliberated, but the modern theory is correlated with the British philosopher John Stuart Mill who built up the theory from a plain hedonistic version put forward by his mentor Jeremy Bentham. As Mill uttered, the basic principle of utilitarianism is: “Actions are right to the degree that they tend to promote the greatest good for the greatest number” (2, P1, Kay, 1997).

For Bentham, the “greatest good” was simply “the tendency to augment or diminish happiness or pleasure”, with no distinctions to be made between pleasures or persons; all measures are strictly quantitative (2, P2, Kay, 1997). For Mill, however, not all pleasures were equally worthy. He defined “the good” in terms of well-being, and distinguished not just quantitatively but also qualitatively between various forms of pleasure (2, P2, Kay, 1997) (lower and higher pleasures).

In either case, both men insisted that “the greatest number” included all who were affected by the action in question with “each to count as one, and no one as more than one”. This can be labeled as a form of altruism. Utilitarianism is a simple theory and its results are easy to apply (2, P4, Kay, 1997). It also allows for degrees of right and wrong, and for every situation the choice between actions is straightforward: always choose that which has the greatest utility.

According to the utilitarian view, biotechnology should be assessed on the basis of its consequences, which means on how much good or benefit it can be expected to yield, and on how much harm it risks causing. For a utilitarian, something is beneficial to the extent that it contributes to enhancing the quality of human life, and is harmful to the extent that causes disease, suffering or in some other way diminishes the quality of life (3, P2, The Ministry of Trade and Industry Denmark, 1999).

The most promising benefit of genetic engineering is gene therapy which is the medical treatment of a disease wherein the defective genes are repaired and replaced or therapeutic genes are introduced to fight the disease (4, Shandilya, 2008). Every human being inherits approximately 30000 genes at birth. These determine his or her physical and emotional attributes. Some of these genes might have mutated or become otherwise defective making the carrier predisposed to certain genetic diseases. These diseases may strike the person during his lifetime or alternatively may not do so at all.

Nonetheless the person is a carrier and passes on these defective genes to his progeny. At some point, perhaps generations later when conditions are favorable, the disease will manifest itself (5, P1, Go, 2009). One of the primary objectives in genetic engineering is to identify and isolate such genes with a view to repairing them or eradicating them so that their harmful effects are negated. An alternate strategy employed is to introduce a gene that has the effect of countering or combating the defective gene (5, p2, Go, 2009).

Another goal of genetic engineering is to find remedies and therapies to treat other non-genetic diseases. Moreover, new protocols were developed to treat auto-immune and cardiac ailments (5, P3, Go, 2009). To add, the field of human reproduction, pharmaceuticals and medicine has gained significantly from genetic engineering. More sophisticated and effective medicines have been developed; bio-engineered insulin and human growth hormone being two such examples. With the new techniques available, at the fetus stage genetic diseases are being identified and successfully treated before birth (5, P4, Go, 2009).

Of course, the elimination of genetic diseases would save tremendous amounts of money and increase the happiness of countless number of people. Genetic engineering is also a windfall for pregnant women who can choose to have their fetuses screened for genetic defects, and thus he can be treated before being born. Aside from the medical outcomes of this innovative technology, genetic engineering also offers a whole new range of jobs in this new industry. Moreover, it surely decreases the cost a government should pay for the medical care of invalids and needy people.

So by weighing the expected happiness such technique would generate, Utilitarianism will definitely back it up. However, this is just what appears at the first glance. When digging more thoroughly into this matter, many flaws arise. In fact, genetic engineering methods are way too expensive that only the extremely rich category of people will benefit from it, while leaving behind a huge branch of humans, lacking good and efficient medical care. This will evidently result in the division of the society: a healthy upper class, and a disease-prone lower class.

This is unanimously labeled as injustice, a concept typically and categorically excluded from the utilitarian view (“everyone should be treated equally”). In addition to that, many philosophers have argued about the capacity for predicting all possible consequences upon which a verdict about whether an action should be considered as moral or not is to be made. Well, creating super intelligent individuals and setting ground for immortal human beings will emphatically turn our world upside down, or even eradicate every single element of this familiar world we are currently living in.

This criticism is directed at the way utilitarianism is implemented in practice. Nevertheless, the idea of weighing up risks and benefits in relation to some of the possibilities offered by biotechnology can be easily rejected. It is believed that other criteria are more important and should have priority over benefits and risks, such as considering it wrong in principle to change the genes of human beings. In sum, ethical dilemmas arise when natural phenomena that were previously beyond the scope of human control are suddenly placed within the realm of human influence.

Selecting human features before birth is something that was beyond the realm of human influence before genetic engineering was developed. In parallel, a historical survey of popular movements reveals that people tend to protest against a law or practice that they believe has violated their rights. It is much rarer to find a group of protesters picketing against some law or practice simply because they feel the law or practice does not maximize utility (1, Williams, 1999).

As a result, most of the highly charged ethical debates are not concerned with analyzing the sum totals of pleasure and pain by all parties involved (1, Williams, 1999), as is the case in a Utilitarian examination. Thus, it is crucial to dissect what is really at stake in order to reach the correct moral decision about any controversial issue, in this case the human genetic engineering. Citations: 1-Williams, Jon (December 1999). An Ethical evaluation of fetal genetic selection . from http://ambient. 2y. net/jon/philo/fetal_genetic_selection_1. html 2-Kay, Charles (1997, January, 20). 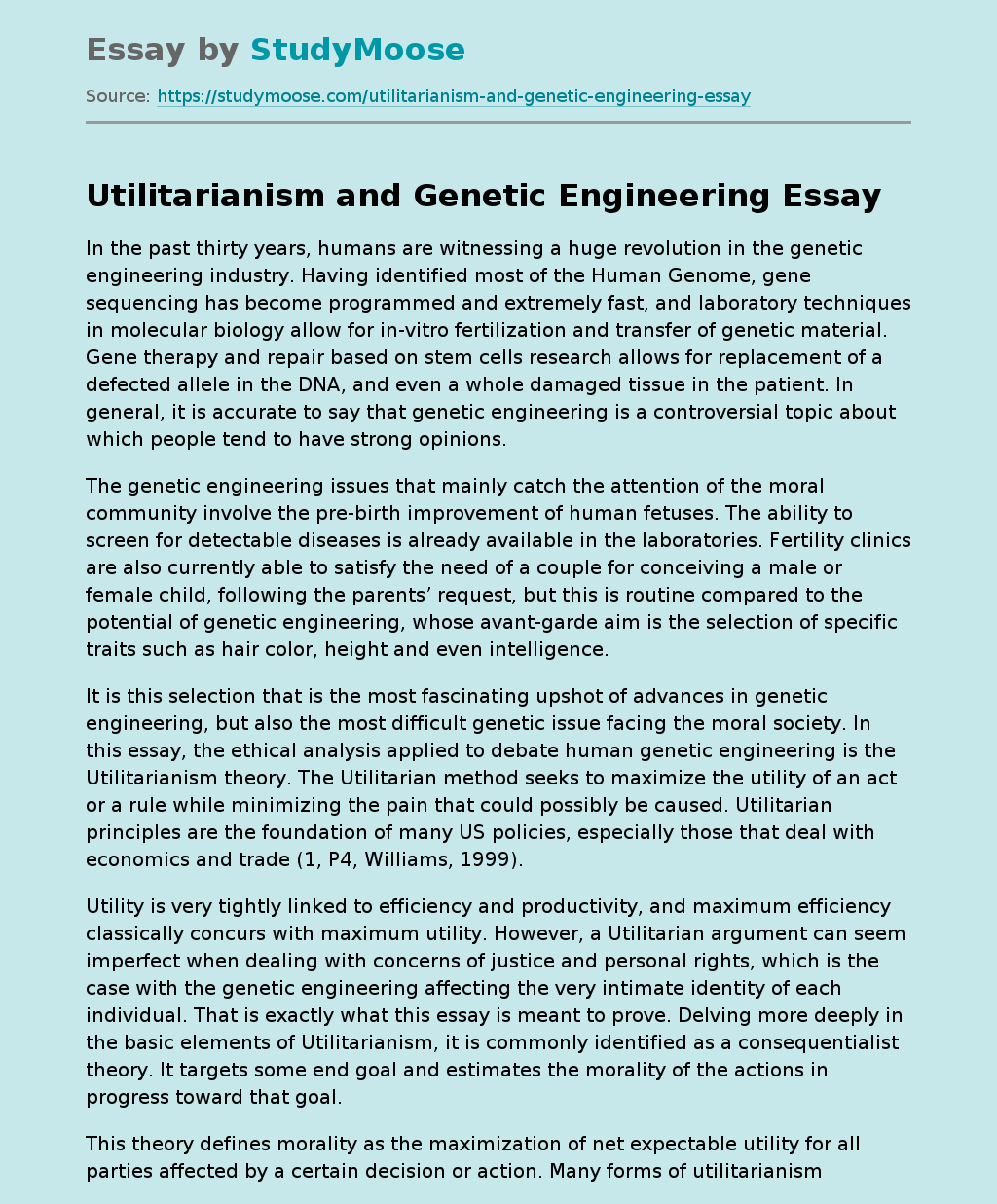