“By bringing in this technology to make the same crop that people eat and grow, make it more insulated against some of the elements of nature, more nutritious… it will improve local production,” said Channapatna Prakash, professor in plant molecular genetics at Tuskegee University, Alabama. “If it does make a difference in their overall health and well-being with the least intervention, it needs to be looked at very carefully,” he said. “If it does provide some solution in certain places and circumstances, then why not? ”

Prakash is also a member of the U.

Don't use plagiarized sources. Get your custom essay on
“ Genetic engineering, friend or foe? ”
Get custom paper
NEW! smart matching with writer

S. Agriculture Department’s agricultural biotechnology advisory committee. Genetic modification (GM) involves exchanging or splicing genes of unrelated species that cannot naturally swap with each other and enthusiastic scientists say the applications are almost limitless. The species can be vastly different, for example, inserting scorpion toxin or spider venom genes into maize and other food crops as a ‘natural pesticide’ to prevent insects and birds from feeding on the plants, or fish antifreeze genes into tomatoes.

So this is the positive side of the argument, however, others do not feel the same – recently trail GM crops have been destroyed even in ‘sleepy’ Devon in a trails site at Dartington. Fears were raised even higher because an internationally acclaimed organic farm was nearby. Insect or the wind could have carried genetically modified pollen to other farms thus creating unwanted and unsuspected mutations. Not everyone agrees that GM foods will necessarily become the saviour for the world’s hungry and people insist that there is, as yet, no conclusive evidence of the benefits of GM.

The whole GM issue creates strong emotions, particularly among the more sceptic opponents to the technology who have been known to march across fields and rip up fledgling test plants, demanding that governments put a stop to “Frankenstein” foods by banning the import and the commercial use of GM crops. Apart from their charge that nobody yet knows how safe GM crops are, they also accuse powerful biotechnology multinational companies of using poor countries as a ‘dumping ground’ for products, which have failed to sell to lucrative but sceptical European markets.

Already there are specific examples – there are problems with Genetically Engineered Soya Bean and Maize Imports. The first main genetically modified food was a tomato paste, introduced with careful consumer consultation, clearly labelled. It sold well until the current furore began. In 1996 the European Union [EU] accepted the import of US genetically modified Soya bean and maize, staple commodities which go untracked into a large number of processed foods. The US companies refused to label or segregate the new products, more concerned with winning markets than public attitudes.

Ordinary people ended up eating modified food without knowing it, with any tangible benefit to them, and having no real say in the decisions. This major failure of democracy resulted in a huge consumer backlash. It also raised questions of environmental risks of GM crops spreading genes to other species and possible loss of biodiversity. As can be seen sharing understanding of the risks and labelling GM tainted or enhanced products has not happened automatically – there is too much money at stake. However, we should consider these issues carefully. There are risks far more complex than a blanket moratorium would solve.

Different crops vary enormously over questions like gene flow [e. g. due to mode of pollination or unrestricted movement of GM animals for breeding] or wild relatives, which might become weeds or pests. So a plant like oil seed rape merits much more careful attention than other less genetically promiscuous species. Talking to ecological scientists, it seems clear that five years of research is not going to give a generic answer to tell us whether “GM is safe” or not. We know so little about either the ecology or safety of normal foods that we often do not have a yardstick to make meaningful comparison with GM foods.

Much better than a crude moratorium is to be precautionary but on a case-by-case basis, rather than assume that everything is equally risky. Rather than swallow whole the current green position on GM foods, we need to recognise that it is just as easy to exaggerate risks as it is to ignore them or pretend they aren’t there. Current EU labelling is only mandatory if you can detect genes or the proteins in the food, but this only addresses a small minority of the concerns. If someone objects to GM food on ethical or religious grounds or to the effect of the crop on the environment, present labelling misses the point completely.

Here is a fundamental injustice, which the Government has done very little to address. Genetic Engineering, Friend or Foe? Is still a question to be answered – the debate will continue, as will the research that pushes the boundaries of science. The answer lies in the far future! Show preview only The above preview is unformatted text This student written piece of work is one of many that can be found in our GCSE Variation and Inheritance section. 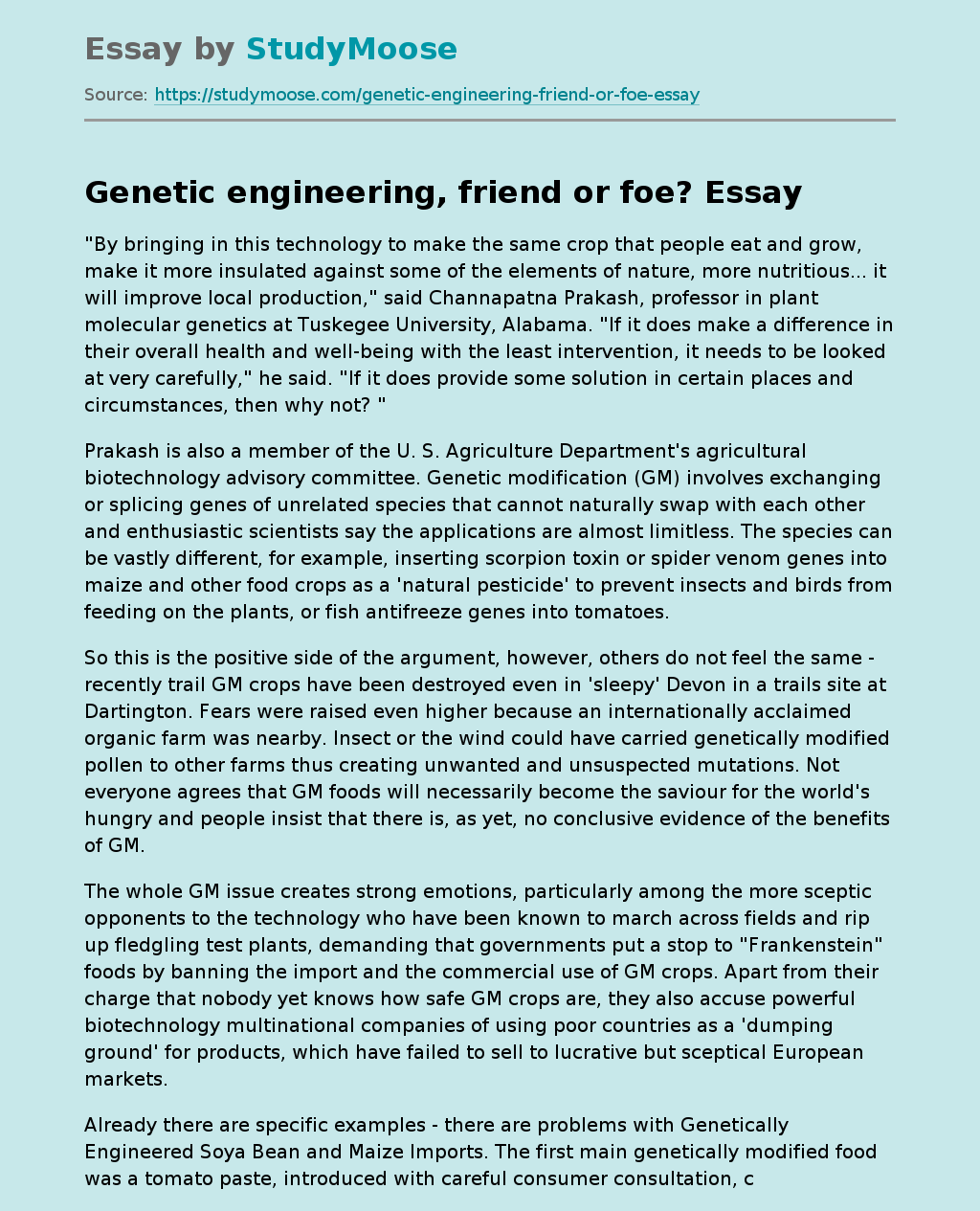