Andrew Niccol’s film, “Gattaca” describes a world where genetic engineering has become norm. Based on a society where intellect is built not on diligence and determination but instead genetic determinism, the film explores oppression in society, displaying just how easily corruption can become. Race, sex, height and gender; discrimination of which is unseen in the world of Gattaca. Genoism, the neologism coined by Niccol to describe unethical and illegal genetic discrimination is more prevalent in the film than any other message.

Don't use plagiarized sources. Get your custom essay on
“ Gattaca – Genetic Engineering ”
Get custom paper
NEW! smart matching with writer

Based in the “not-so-distant future”, genetic discrimination is depicted as misguided, dividing within a society. Vincent makes it apparent that genes have become destiny. In a world deemed as unjust in acts of discrimination, the society where Gattaca is based proves otherwise; rejecting both the desires and dreams of un-enhanced individuals known as the in-valids. Anton, Vincent’s father, becomes instantly ashamed of Vincent’s genetic ‘destiny’, in turn giving his name to his next son, who is genetically engineered as elite.

Seen as being fearful of ‘inferior’ blood, Anton refuses to become Vincent’s blood brother, putting both his status of elite and ‘blood’ ahead of his ‘blood’ relations. Further, when Vincent is seen to be incompetent to attend school, because the “insurance won’t cover it,” – displaying again the discriminating and dangerous world that Genetic Engineering has since created. Vincent mentions that he “now belonged to a new underclass – no longer determined by social status or the colour of his skin. Instead, characters can present a single hair of a potential mate for DNA sequencing, in turn summarized by a single number indicating overall eligibility.

Irene is given the result of Vincent’s DNA – “9. 3, quite a catch”; leading her to express bitterness in the idea that Vincent may not be as inferior as once thought. This hazardous world of discrimination is exposed after the Director’s murder when in-valids are found segregated in slums, strategically placed behind bars to reinforce a message of hierarchy differences.

This discrimination is shown when Eugene is approached by the policeman, displaying a condescending attitude towards the substandard individual, before learning of his genetic superiority. The film constantly displays Vincent’s body materials shedding, with shadows like bars, conveying some sense of imprisonment imposed within his genetic ‘destiny’. Ruling Niccol’s society of Gattaca is the use of technology to enhance an individual’s capabilities. Gattaca represents a dominated society where success is based not on determination but that of clever genetic engineering. Ten fingers, ten toes, that’s all that used to matter. Not now. Now, only seconds old, the exact time and cause of death was already known. ” Andrew Niccol created that of a struggler within Vincent from the moment of birth, destined to play the role the second he was conceived naturally – wearing the label of “God Child” for his entire life. The label of which determines the lifestyle and quality of Vincent’s life – a life of negative prospects. “They used to say that a child conceived in love has a greater chance of happiness.

They don’t say that anymore. ” Vincent is placed into a languish world where ‘perfect’ specimen are perceived as the unchallenged Alpha class within society, juxtaposed with the ‘in-valids’ – the lacking genetic profiles who are forced into a weaker, underpaid, menial work. Further, Niccol has created a society where business companies no longer conduct job interviews – instead relying solely on tests of both blood and urine to predict the perfect candidate. But is Genetic Engineering really as bad as Niccol sees it to be?

The new technology not only allows for a world where pianists are genetically engineered in order to play pieces “that can only be played with 12 fingers” – but also a world in which police and security checks are accomplished through immediate DNA investigation from blood samples. The film shows a misconceived view of predictive genetics when Vincent becomes evidence of striving above and succeeding over his ‘destiny’. By using scrupulous acts such as the scrubbing of genetic materials, it stresses the struggle which Vincent faces in order to defy the enforced destiny brought into society.

Yet Vincent conquers his genetic destiny, and proves “there is no gene for fate,” by beating Anton – twice, in the race against water; “It was the moment that made everything else possible. ” Throughout the film, Niccol uses Vincent to prove that genes are far from being the sole determinant. However, “the best test score in the world wasn’t going to matter, unless I had the blood test to go with it. ” Yet through all the Genoism, Vincent overcomes his predicted destiny in a time where “the impossible had happened. It was the one moment in our lives that his brother was not as strong as he believed, and he was not as weak. Proving “there is no gene for fate,” Vincent challenges the consequences of allowing genetics to determine the future of individuals, whilst inspiring others, in the flight of his journey to the stars. The film juxtaposes both Vincent’s determination with the murder investigation, where Vincent crosses the highway despite his blurred vision, in comparison to the police investigating the murder seeming blind. Niccol shows the viewer that instead of genetic fate, it is instead the strengths which an individual portrays that determine the future of that character – and Vincent proves this.

It’s within Vincent’s defects which give him the spirit that Eugene and Anton both lack. Niccol leads us to believe that Vincent is a man who has overcome his odds in order to achieve his dream, in a society where individuality is an unrequited trait and the ability to conform accurate DNA is all a person requires in order to succeed. It’s evident that Niccol was determined to display as many hidden symbols and messages in his film as possible, in order to force the viewer to question issues about society tampering.

These symbols focused on strong diplomatic issues such as genetic engineering and genetic discrimination. Niccol offers not just that of a warning, but also as a stark realization of what can occur when society tampers with nature. I also believe that the film portrays the prejudices of life ruled by genetics and warns about a dysfunctional society. What scares us the most is that the science in the movie seems so plausible nowadays. We discriminate individuals based on colour, religion and even the way one talks – it’s only expected that the next logical step is discrimination on a cellular level. 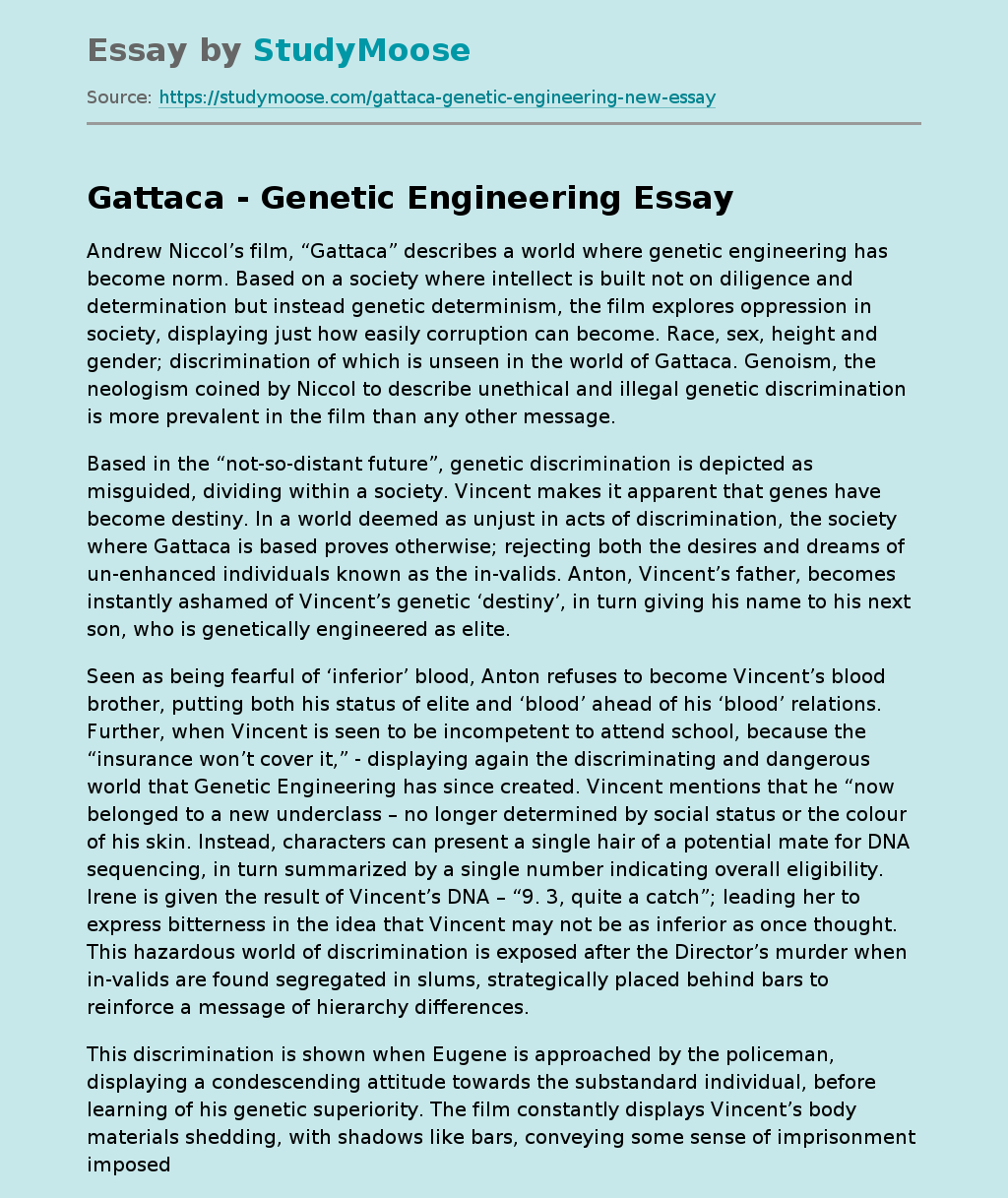