GATTACA: 'Vincent is supposed to be weak. Yet his strength of character is the key to the story.’

‘Vincent is supposed to be weak. Yet his strength of character is the key to the story.’ Discuss.

The film text ‘Gattaca’, directed by Andrew Niccol can be seen as a piece that draws many parallels to the world that we live in today. One such parallel is the fact that often in society, the ones who are at a disadvantage are the ones who display the greatest strength of character. Niccol uses Vincent as the vehicle through which he demonstrates how strength of character can neutralise and overcome disadvantages faced.

Don't use plagiarized sources. Get your custom essay on
“ GATTACA: ‘Vincent is supposed to be weak. Yet his strength of character is the key to the story.’ ”
Get custom paper
NEW! smart matching with writer

Gattaca portrays a society that no longer takes into consideration a person’s character. Vincent’s refusal to ‘play the hand he was dealt’ is his key to success.

The text makes a clear distinction between ‘human’ and genetic traits. So clear is the distinction that Niccol uses separate vehicles to display each set of traits. As the traits and the vehicles clash, Niccol creates a sense of sympathy for Vincent as he is portrayed as the disadvantaged and weak in society in the sense that he does not possess the physical and mental assets that make him a valued member of society.

A key example of this is the recurring games of ‘chicken’ between Vincent and his genetically superior brother Anton. Anton beats Vincent time and time again as is expected of Anton by society. However, when Vincent bests his brother one day an emphasis is placed on the manner in which he beat his brother. “You wanna know how I did it? I never saved anything for the swim back!” This creates the impression to the viewer that Vincent did not win with superior stamina, skill or physical strength, rather he won as he possessed traits like courage, determination and grit, traits that are lost in the geno-centric society in which he loves but traits that are valued and admired in todays society.

The text can be seen as parallel to today’s society as often it is those who are faced with the greatest disadvantage who succeed. Vincent’s journey is a classic tale of 1 against the world or in this case 2 against the world. At every bend society is there to stop Vincent from achieving his lifelong dream of going to space. Even his parents try to prevent him from attaining his goal, “Vincent, the only way you’ll see the inside of a spaceship is if you’re cleaning it.” This coming from his father can be seen as the ultimate discouragement but instead Vincent uses it to spur himself onwards and upwards both literally and figuratively. In relation to the real world, notable figures like Oscar ‘Blade Runner’ Pistorious overcame what is seen as a severe athletic disability in today’s society to compete at the 2012 London Olympics. While it is not uncommon to hear of ‘rags to riches’ tales in todays society, the one notable difference between today’s society and Vincent’s society, is that disadvantaged people are given every chance to make the most of their life (in 1st world countries), yet in Vincent’s society the disadvantaged are shunned and are viewed as a blight on society.

Gattaca is a reminder that you cannot judge one on their outwardly appearance or in Gattaca’s case, a persons genetic composition. As the saying goes, ‘don’t judge a book by its cover.’ Vincent is once again used as the vehicle through which Niccol conveys this message. To the eyes of society, Vincent is an ‘invalid’ with inferior physical capabilities, high risk of heart failure and other deficiencies and with a “life expectancy of 30.2 years.” However, because of the ‘faceless’ society that Vincent lives in (which refers to personality as much as it does to physical appearance) he lacks the opportunity to progress with his life as his strengths of character are not held in anywhere near the same esteem as desirable genetics are. Vincent claims, “There is no gene for fate.”

This is in reference to the fact that he is of the belief that genes aren’t everything, even if society has such beliefs. Rather there is an element in every human being that makes him or her truly unique and this is what Vincent prides himself on, the fact that his assets which are undeterminable by genetics are what makes him the person that he his.

While the society in which Vincent lives in regards Vincent as weak and inferior, his character is both key to his success and the story as without his steely resolve and fierce determination there would be no story as society would continue to function as it was designed. Parallels can be drawn with Vincent’s plight and the journey’s of figures in our society like Oscar Pistorious. Gattaca serves to compound the message that has been passed down through generations by reasserting that you shouldn’t judge a person before you know them personally. Vincent refuses to ‘play the hand he was dealt’ and this is the focal point around which Gattaca was told.

GATTACA: 'Vincent is supposed to be weak. Yet his strength of character is the key to the story.’. (2016, Apr 05). Retrieved from https://studymoose.com/gattaca-vincent-is-supposed-to-be-weak-yet-his-strength-of-character-is-the-key-to-the-story-essay 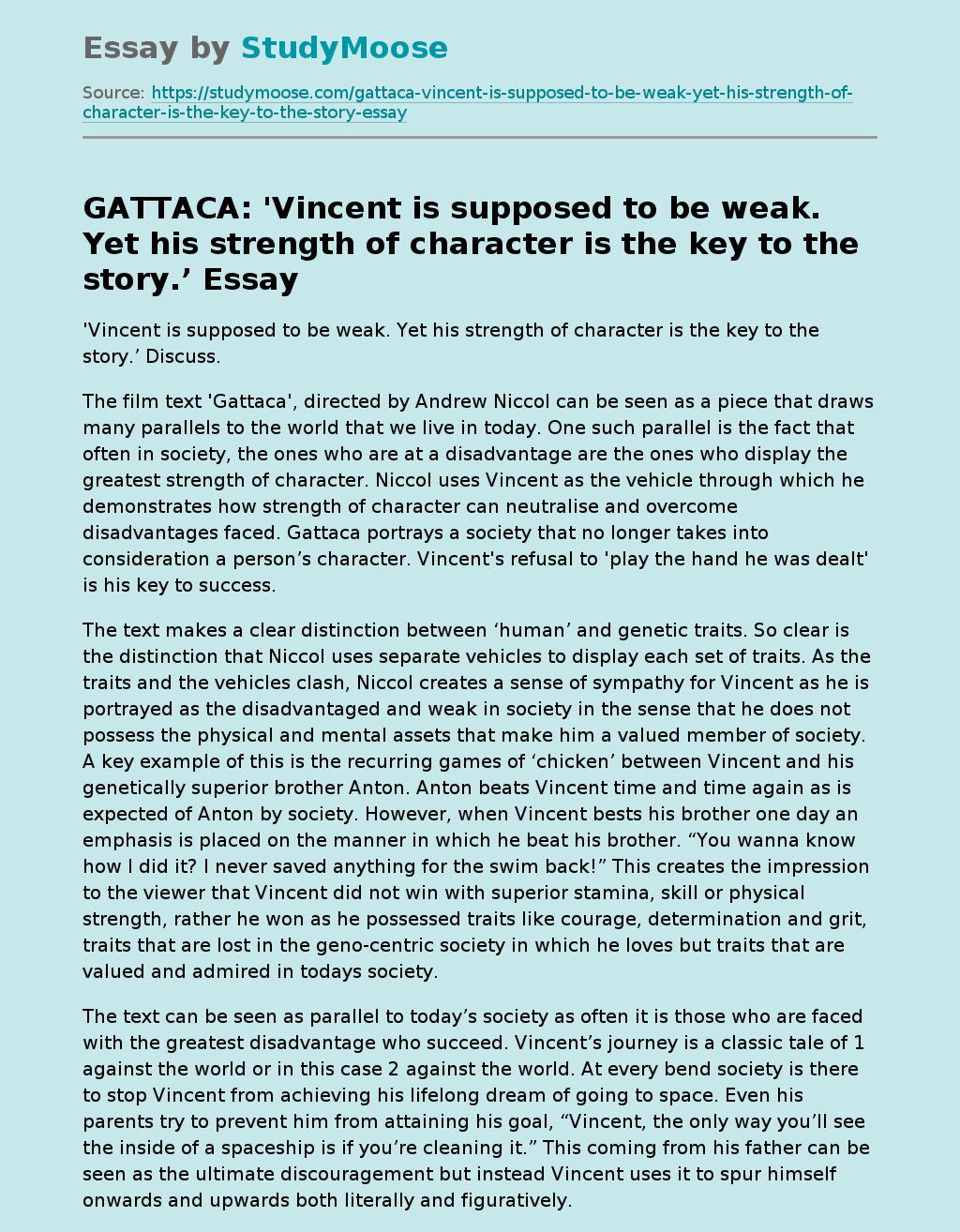