Brave New World as a Dystopia

Don't use plagiarized sources. Get your custom essay on
“ Brave New World as a Dystopia ”
Get custom paper
NEW! smart matching with writer

A primary example of how the society in Brave New World is a dystopian society is the lack of reality in the novel. This is exemplified by the use of soma, a drug that takes the user to a different world. Mustapha Mond, one of the ten World Controllers of the society describes soma as “”Euphoric, narcotic, pleasantly hallucinant… All the advantages of Christianity and alcohol; none of their defects… Stability was practically assured” (Huxley 53-54).

The users of this drug are put in a state where they are away from reality; they are completely unaware what is going on around them.

This is significant because the users do not see the disfunction and unhappiness of the society, meaning that when something goes wrong they can hide from it instead of fixing it. In addition, the islands further prove the lack of reality. When someone does not agree with the way that the society is being run by the Controllers, they are cast off to an island, isolated from the society so they cannot cause an uprising or rebellion (227-228).

This is important because it hides the reality of dissatisfaction for society. It creates an atmosphere that is filled with happiness for the society, with no glimpse of the unhappiness that is apparent.

Even though this lack of reality portrays a dystopian society, there are other ways that it is portrayed as well. The dystopian society of Brave New World is further proven by the lack of freedom. In this society, people are bred in a factory to be whatever the society needs them to be (Huxley 13). This is significant in that everyone has a destiny that they cannot escape: a purpose that they did not choose to be their own. Without this freedom, nobody can truly be free and happy. Because of this, however, the society has another method to ensure “happiness.

Though this alone portrays a clear dystopian society, there is yet another way the dystopian society is portrayed. In addition to both lack of reality and freedom, the dystopian society is also portrayed through the lack of identity. For example, in order to populate the world, the Hatchery uses a process known as Bokanovsky’s Process. This process takes one embryo and splits it to excess of 96 new embryos (Huxley 6). This causes each embryo to have the same genes, making them 96 identical copies of one another. This is significant because it is impossible for a person to be an individual when there are 96 exact replicas of him or her.

Also, from the moment of their “birth,” each and every citizen is casted into a social class: Alpha, Beta, Gamma, Delta, or Epilsons (Huxley 6). These castes determine the person’s role in society, with Alpha being the equivalent of a noble of the society and Epilsons being the peasants. These roles are assigned during Bokanovsky’s Process by such acts as depriving the developing embryo of the proper oxygen (6-7). Because of this, everyone is thought of as a member of a caste, not an individual. An Epilson will always be an Epilson, with no chance of being a standout individual in society.

This lack of advancement destroys the sense of personal achievement and self-earned identity. Overall, the society in Brave New World is clearly a dystopia. The citizens are clouded by the society into thinking that they are happy. The lack of reality portrays a fake happiness that is surrounding the citizens. Also, the lack of both freedom and individuality take away what makes a person unique and destroy any chance at true happiness. The society believes they are truly happy only because it is what they are conditioned to believe. This false happiness makes the society what it truly is: a perfect imperfection.

Brave New World as a Dystopia. (2016, Jul 23). Retrieved from https://studymoose.com/brave-new-world-as-a-dystopia-essay 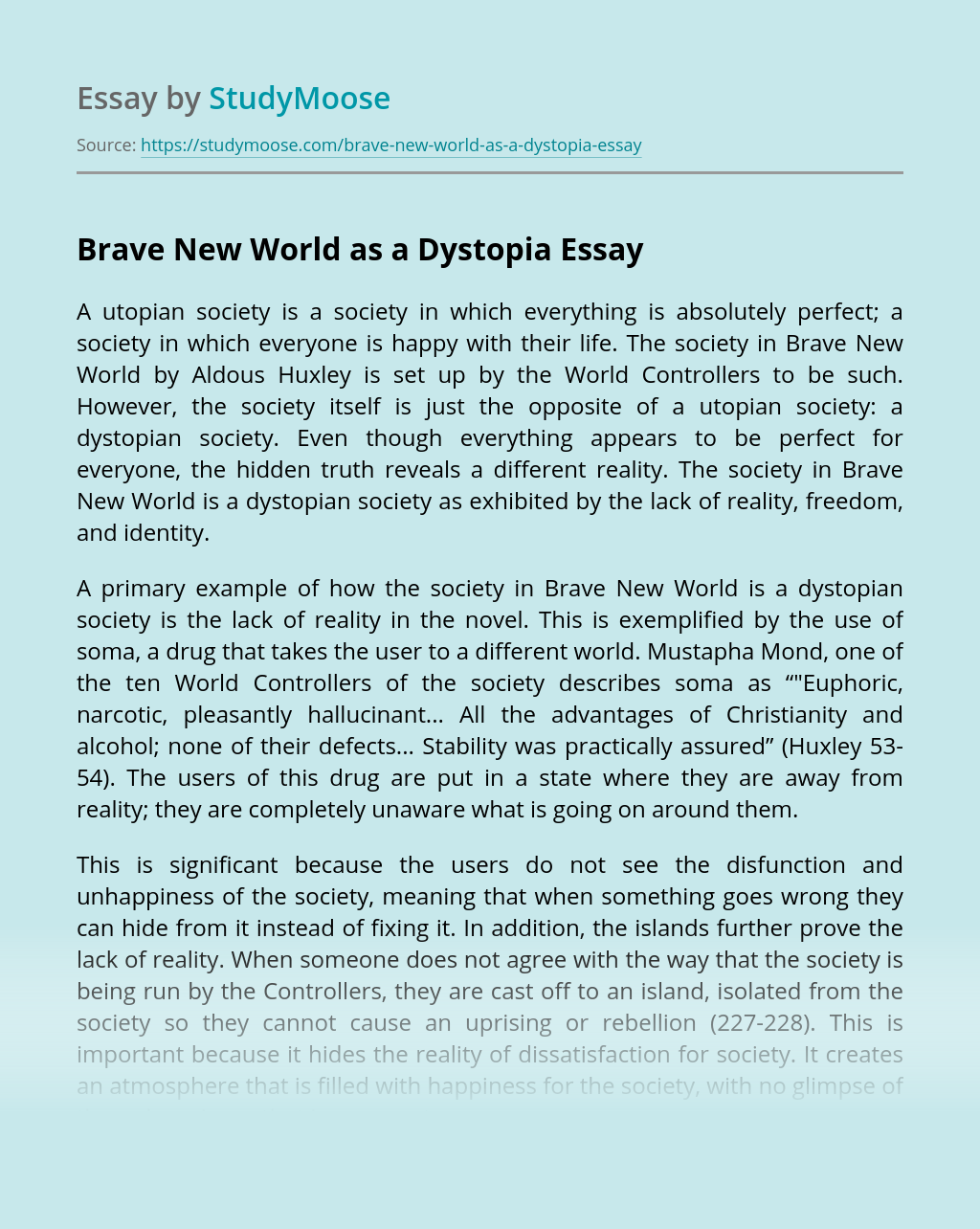