“The books that the world calls immoral are books that show the world its own shame.”1 Concerning Aldous Huxley’s dystopian novel, Brave New World, readers find themselves thinking the theme of the novel is not of proper conduct and it would not take place in their current world. Brave New World follows a futuristic society, the World State, where citizens are mass-produced and conditioned to suit the ways of the government and the society as a whole. Everyone is born to fit in certain classes and they crave pleasure, order and conformity.

John the Savage, the protagonist, is of strict Christian moral codes and is shocked by the government’s control over citizens and their behavior.

He rejects their mentality and tries to go against it, with no avail. The citizens’ sexual freedom, conditioning, risky use of drugs, dissolution of families and manipulation of religion to accommodate the society irritates many a moral critic. “Moral education, which ought never, in any circumstances, to be rational,” is said by a director (Huxley 32).

It implies that the leaders do believe in moral education. However, without God or sense, it is they who make the morals. Huxley warns readers of how technology and power in the hands of the government can cause the downfall of man. With the concept of socialist morality in mind, the World State’s power is absolute and citizens follow societal codes and morals whether they like it or not, without a fight.

Babies are born and nurtured in the community for the purpose of becoming productive members of the society.

Citizens are conditioned to think that everyone is equal and they are made useful for the good of the society and the government. They satisfy themselves through food, sex, clothes, drugs and other entertainment promoting fun and consumption. This ensures the State’s stability. Hypnopaedic (sleep-teaching) messages such as “Every one works for every one else. We can’t do without anyone…” (Huxley 66), and “Ending is better than mending. The more stitches, the less riches…” (Huxley 50) promote the part of socialism where every member of the society must work in a way that benefits the community. The second part promotes consumerism; people must throw away old possessions and buy newer ones. The State’s ability to satisfy these desires of the people promises economic growth and affluence. Humans are just devices in this social and scientific world, manipulated and controlled by the World State for the good of the community. “Wheels must turn steadily, but cannot turn untended.

There must be men to tend them, men as steady as the wheels upon their axles, sane men, obedient men, stable in contentment,” reasons Mustapha Mond, the World Controller (Huxley 44). This quote entails that this dictatorial government knows what is best for the society, not individuals, and that is why the leaders have set the moral standards. The State maintains power through technology and medical operations which allows citizens to feel so happy, they do not care about personal freedom, thoughts or choices. At the beginning, the Director says, “Bokanovsky’s Process is one of the major instruments of social stability!” (Huxley 18) The Bokanovsky’s Process is a biological version of Henry Ford’s assembly line.

It is a means of churning out test tube babies, who will live and work in a predetermined society. The populace, the social castes and the mental processes of embryos are easier to control due to this process. There is also a lack of individuality with the concept of the assembly line where everyone is indistinguishable and managed by the government to maximize efficiency and profit. Individuality does not represent community to them and therefore, is not beneficial. With the World State’s control over birth, life and death of its citizens, it is able to achieve community amity.

Effective people are needed for an effective society. To accomplish this task, definite stability is needed. Progress and science allows the State to create a happy and a superficial world. World Controllers, the leaders of the society, are careful with the use of science and technology. The use of soma, which clouds present reality and makes people experience happy hallucinations, ‘feelies’, hypnopaedia and conditioning machines are tools to promote social stability. It is to keep citizens busy with work and entertainment. In the novel, citizens must go through different kinds of conditioning. “All conditioning aims at that; making people like their inescapable social destiny,” (Huxley 24) says the Director of Central London Hatchery and Conditioning Centre, where test tube babies, called “bottle babies”, are decanted. Members of the society are taught to never be unsatisfied with their jobs, which eliminates individuals going against their ‘destinies’. In turn, stability is created. Citizens learn through slogans, rhymes and hynopaedic messages to use soma and have sex with countless members of society.

Mond explains to boys touring the Hatchery, “Mother, monogamy, romance… What with mothers and lovers, what with the prohibitions they were not conditioned to obey, what with the temptations and the lonely remorses, what with all the diseases and the endless isolating pain, what with the uncertainties and the poverty-they were forced to feel strongly. And feeling strongly and strongly, what was more, in solitude, in hopelessly individual isolation, how could they be stable?” (Huxley 43) Mond says by doing away with things such as mother, monogamy, “feeling strongly” and other things mentioned in the quote is how stability and harmony is gained in a society. This quote also shows the viewpoint of the World State that all humans must conduct themselves in one way. In the system, members must always remain happy for the sake of social stability.

A recent report in Psychology Today concluded, “The most significant predictor of a person’s moral behavior may be religious commitment.”2 Huxley uses Christian morality to further illustrate the socialist morality of the plot. The religious conviction in man has been evident throughout the ages. The World State recognizes this urge and manipulates it toward the relevance of supporting and indulging society. The State in Brave New World creates a single religion for its people based on Henry Ford, his teachings and his representation of an assembly-line society than based on a Christ, his teachings and a spiritual God with whom people may communicate by themselves.

The services are government-funded and are mandatory, such as, the Solidarity Service, which is a parody and a substitution of the Christian Communion Service. The song of the service goes like this, “Ford, we are twelve; oh, make us one, Like, drops within the Social River; Oh, make us now together run…Orgy-porgy gives release.” (Huxley 74) This gives readers an idea about of the control the government has on religion and sexual practices. Though trivial, it is an example of a religion the World State forms to keep citizens in line and in accord. The phrase, “Ford, we are twelve; oh, make us one…” (Huxley 74) summons Ford and reinforces the lack of individuality where humans are the same as items on the assembly line. Twelve members are the same as one, without any difference.

This service gives release of emotions, a human nature the World State had not been able to stop through conditioning. It is advantageous as it does not pose a threat to power and control of the State. Karl Marx is quoted to have said, “Religion is the opiate of the people.”3 He means to say that religions are organized to relieve people’s anxieties about their personal responsibilities for the unfairness in life. In the novel, it is soma that is substituted for religion. Mond refers soma as, “Christianity without tears…” (Huxley 185) Soma allows the public to feel at ease than the sadness and guilt caused by Christianity. Their act of prayer is taking in soma and they feel fulfilled and happy. In Brave New World Revisited, Huxley states that soma is the religion of the people.4 It can be said that the citizens of the World State are very religious in adhering to moral standards organized by the government for themselves.

With the caste system strict and firm, authority in the World State is not questioned nor challenged. As a group, members fear and respect the government and would never go against it. Members may feel dissatisfied with their way of living. When the Director asks Bernard, “… can you show any reason why I should not now execute the judgment passed upon you?’, Bernard answers with a confident “Yes, I can.” (Huxley 121) He proceeds to present the Director his son, John. Having a son goes against all the social morals taught by the World State. Although Bernard did not act in an anarchist fashion, he took a small step towards being disrespectful to and humiliating a man of authority. John the Savage does not like what he sees. With “O brave new world” resonating in his head, John cries out for people at the Park Lane Hospital of Dying to stop taking the soma rations. He attempts to throw out the soma through the window and asks the people to choose freedom (Huxley 168). John hadn’t been able to go against the government. Although chaos doesn’t fully place take and seeds of confusion have been planted in the society, the government is still in control.

The goals of morality, as described by C.S. Lewis, are to ensure fair play and harmony between individuals, help form good people to have a good society and keep them in a good relationship with the power that is responsible for creating them. By their motto of “Community, Stability, Identity” (Huxley 18), the Brave New World achieves these goals, given through questionable methods. The State’s ability to satisfy needs and wants of the public through entertainment, work and consumption leads to stability and economic growth for society.

The government’s different conditioning techniques, intentional drug use, manipulation of religion and view that everyone belongs to and works for everyone else are used to benefit society in creating useful citizens. The consequences are a loss of dignity, values and emotions – in short, a loss of humanity. This is the idea of extreme socialist morality that takes place in the book. This version of society reflects the current society’s economic values – individual happiness is the satisfaction of his or her needs and success of growth and prosperity. The social moral codes of Brave New World create a superior society where people cooperate instead of compete. Although some critics and readers may think this is accomplished through wrong conduct, this may be what our current society strives for. 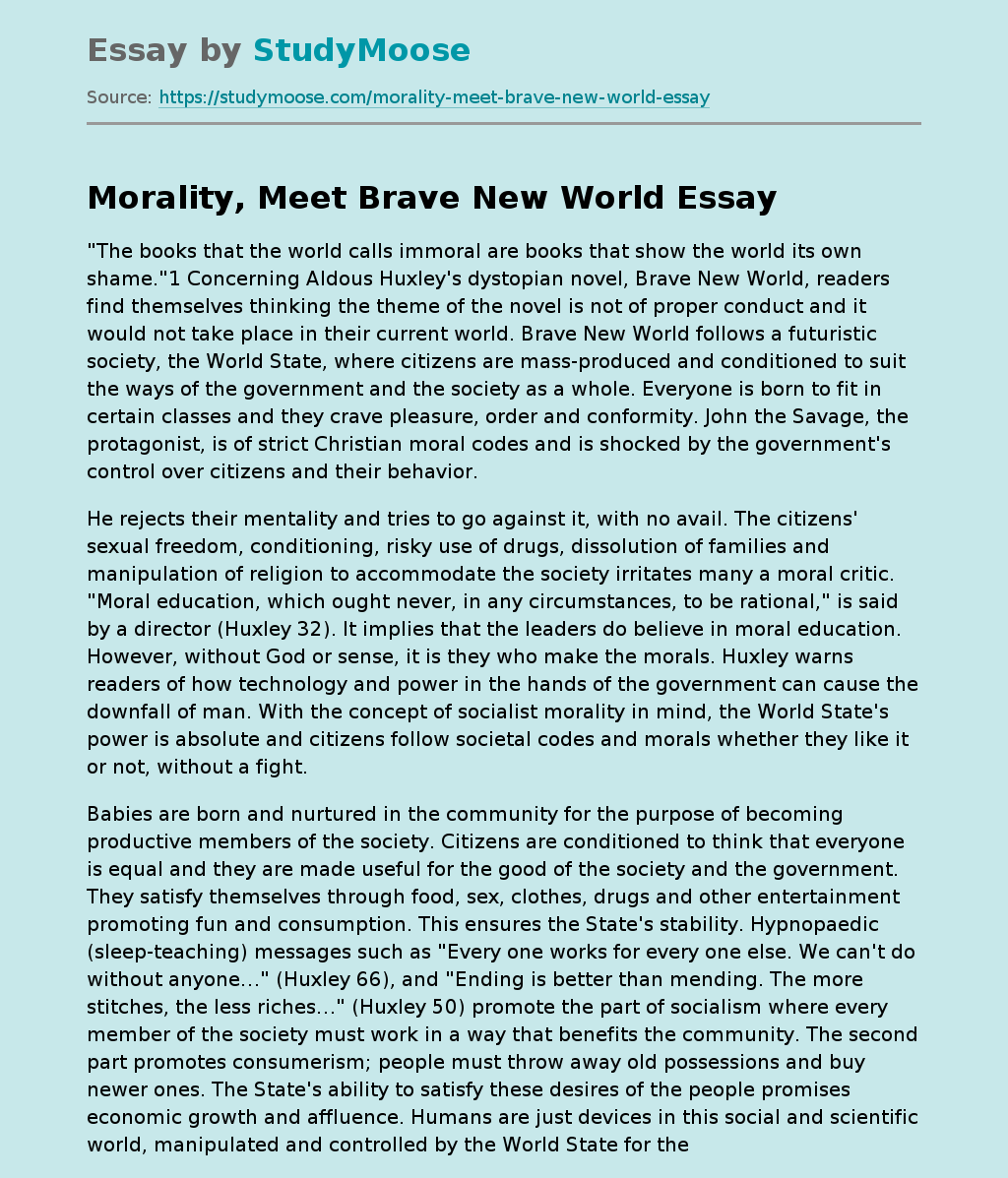