In the novel, Brave New World, by Aldous Huxley, Huxley presents a future where total conformity is an aspect of society. Each and every citizen of this World State is conditioned a lifestyle that is determined at birth in order to have a more “perfect” civilization. Each person is conditioned to fill a certain roll and to not question why they are doing it, just simply do it. However, just like every other perfect society that is made, there are certain individuals that are not conformed with being like everybody else, who are unique, original.

Don't use plagiarized sources. Get your custom essay on
“ In the novel Brave New World by Aldous Huxley Huxley presents a ”
Get custom paper
NEW! smart matching with writer

And, within each of these characters, their difference in personality does not fit the normality of this society, which is why they use soma in order to fit in, to feel conformity within themselves. Huxley uses characters such as Bernard, Linda, and Lenina to show that no civilization is perfect and that there will always be a likelihood of people rebelling from such a society.Each and every human being created in this society was created in a factory.

Not by two actual human beings, making it so much easier to make each person feel conformed to what they have become. Since they were all made the same way and raised the same way, nobody would be able to question the fact as to why everybody was so similar. Each child was conditioned the same way. The director states, Offer them the flowers and the books again.’ The nurses obeyed; but at the approach of the roses, at the mere sight of those gaily-coloured images of pussy and cock-a-doodle-doo and baa-baa black sheep, the infants shrank away in horror; the volume of their howling suddenly increased” (page 30).

By raising the children in factories, and not by actual parents, there’s no risk of these children growing up and rebelling because they were all trained in the same way, to not like the same things. And, each of these children are assessed to different groups, where they are supposed to fit in, where they are supposed to feel as if they fit in. And, it is highly unlikely that someone will not fit in because these groups were chosen carefully. Furthermore, when it comes to times of sadness, Bernard, Linda, and Lenina each give up a part of their own individuality in order to continue to stick to the conventions of the World State society, which then adds to their struggle to find a way to fit in. To begin with, Bernard’s physical appearance is one of the most obvious reasons as to why he doesn’t fit in, what sets him apart from being an Alpha. Bernard’s physique was hardly better than the average Gamma. He stood eight centimeters short of the standard Alpha height and was slender in proportion (page 69). And along with his physical appearance, Bernard also has the capability to think differently than most citizens in this World State can ever even accomplish. When Bernard goes on his date with Lenina, he goes as far as to comment his own thoughts, his feelings, “It makes me feel as though’ he hesitated, searching for words with which to express himself, as though I were more me, if you see what I mean. More on my own, not so completely a part of something else. Not just a cell in the social body. Doesn’t it make you feel like that, Lenina (page 90)? Bernard goes as far as to think of something out of the ordinary. Something people in this society would never begin to imagine because they are just so used to not having to think for themselves. Everything is done for them and they are completely okay with it. However, despite his difference in character, he decides not to show his differences because of the fact that they would challenge the World State. Instead of questioning the world around him, he takes soma as a form of trying to solve his problems of fitting into society. He becomes another conformist to the conventions of World State. Similarly, Lenina also has many characteristics that do not fit into the World State. One of them being that she tends to be in a relationship with only one guy, rather than going out with many guys, which is something that is conditioned by the World State. Once John comes to visit the World State, Lenina immediately falls in love with him and can not stop thinking about him, and those are two of the human emotions that citizens should not have in the World State. Her emotions are apparent in one particular part of the book, Lenina alone said nothing. Pale, her blue eyes clouded with an unwanted melancholy, she sat in a corner, cut off from those who surrounded her by an emotion which they did not share (159). Lenina longs for a love that involves connection and feelings, but soon decides to abide to her society and chooses to have a love surrounded by blind sex and no feelings. And through this decision, she conforms to the norms of her society. Finally, Linda also possesses unique characteristics, which are due to the fact that she actually gave birth, to her son John. Despite being conditioned to be horrified at the idea of having a baby, she still loves her son John. This is clearly able to be seen when John describes the time Linda tried to beat him but just couldn’t. But she didn’t hit him. After a little time, he opened his eyes again and saw that she was looking at him. He tried to smile at her. Suddenly she put her arms round him and kissed him again and again (page 119). Since Linda has an emotional attachment to John, it definitely makes her have a different point of view from the other citizens of the World State Society. People in this state have never experienced what it means to have a child, let alone raise one. So, it’s no surprise as to why Linda is so different and is attached to her child. But, despite the motherly connection with John, she decides to give her life up to the drug soma. In conclusion, all three characters have unknowingly fallen into the conformities of the state’s defective rules, preferably choosing to abide to the state’s values that seemingly do not fit their own characteristics. Instead of being themselves and being the first to actually rebel against this society, they decide to abide to these rules and take drugs in order to feel better. The World State’s guidelines and regulations pull all the citizens of the World State, including Bernard, Lenina, and Linda, who are apparently different, into one lifestyle of living through a domino effect of conformity: the more people that are conform, the harder it is to resist the urge to conform with them. Aldous Huxley’s Brave New World shows the devastating effects of conformity.

In the novel Brave New World by Aldous Huxley Huxley presents a. (2019, Aug 20). Retrieved from http://studymoose.com/in-the-novel-brave-new-world-by-aldous-huxley-huxley-presents-a-essay 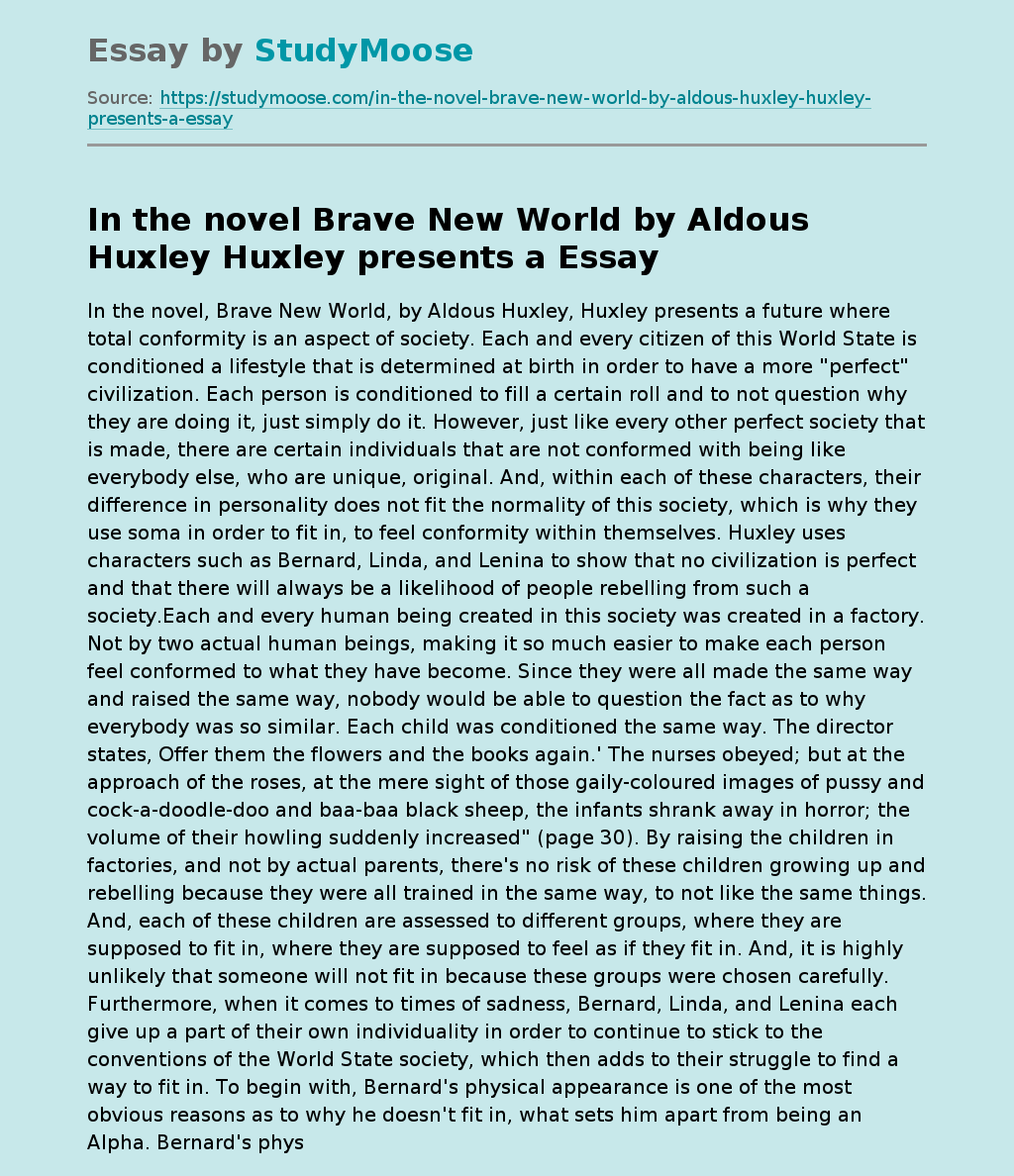