The authorities in Aidous Huxley’s Brave New World (1932) use hypnopaedia or sleep teaching to exert control over the population in State World. At birth, children are conditioned in their sleep so they can fit in the future cultural spaces of their various castes (social classes). The application of the sleep teaching technique is used to control morality of the people through suggestion made while they sleep. Admittedly, the concept of sleep teaching would interest any leadership authority involved in building or running a society efficiently.

In the hypothetical scenario that I was to build my own society, I would reject the use of hypnopaedia and let people have free will and self determination within acceptable confines of the rule of law and established social norms.

The fundamental reason why I would choose to reject the practice of hypnopaedia is that while it leads to a seemingly utopian world with order and perfection, in reality it creates dystopian destruction of the human psyche.

The state leadership in the New World exerts absolute control of the people and suppresses creativity leading to artistic and literary minded people such as Helmholtz Watson living an oppressive and sad life. The human mind is best left to thrive in a natural and uncontrolled state to maintain the core of what makes humans unique and critically progressive; freedom. Due to the malleability of the brain, it is possible that if I choose sleep condition teaching in my society, I would still have to consider additional measures in future to ensure control and manipulation is maintained as people grow and change.

In the novel, the state is compelled to constantly use Soma a drug that induces an false sense of happiness. Such a measure would not only be unsustainable but would also be dehumanizing, inhumane and torture as people would become dependent. Just like other drugs, citizens would also likely experience potentially acute withdraw symptoms, addiction and unhealthy dependency.

In my society, I would let natural and traditional human control mechanisms and institutions such as human logic, constitutional laws, education, and good leadership help maintain social control. Instead of instructing people in their sleep to condition their thinking, I would instead use the funds to fully fund progressive education programs so that people become knowledgeable, productive, and easy to govern under democratically elected leadership and laws. Even in the State World, hypnopaedia is accidently discovered and not scientifically researched and developed for the interest of the public good. Controller Mustapha Mond and the leaders adopt it after a young boy accidentally discovers its potential in mind control when he is able to recite an English broadcast after someone left a radio receiver on while he slept, despite being Polish with no English language knowledge.

Indoctrination engineered by sleep teaching is infraction of human rights and impairs development hence negative for positive human development. Therefore, I would avoid at all costs the interference of the natural cognitive function of my citizens as it would eventually be counterproductive. In the dystopian world under controller Mustapha’s jurisdiction, the leadership interferes with the natural course of human life and development of self determination. After the artificial birth, the babies are assigned social status and caste against their will. After the programmed indoctrination, they grow up under close mental state control. Consequently, the citizens grow up as seemingly satisfied individuals but are in fact unstable and dysfunctional mind controlled individuals who cannot socially interact with other people in a normal world in a healthy way. The evidence is seen when a crowd goes in a frenzy of excitement and arousal after witnessing John (who grew up in the real world) attacking Lenina which demonstrates a lot of psychology instability in the citizens.

In summative, given an opportunity to build a society of my own, I would aim for organic governance involving reason, logic and democratic consensus as opposed to psychological manipulation using methods such as sleep teaching. While technological advances might potentially develop in the future to an extent of allowing direct control of human brain, fundamental human rights regarding freedom of self determination are immutable. The authorities do not get to choose what decision people make or what they desire or want in life. Any attempt to interfere with such issues as evidence in Aldous’ Brave New World would lead to a dystopian society where the state prioritizes happiness over truth and technological convenience over scientific based practices. Basic morals, individual freedom, relationship ties, emotions and respect for family institutions are all lost in the State World and replaced with artificial drug induced hallucinations and meaningless casual sex. Such a state is not ideal for sustainable and wholesome human development as only a few individuals in leadership benefit from totalitarian rule while citizens remain stuck in a narrow mental stagnation incapable of healthy natural relations with others in and outside their world. 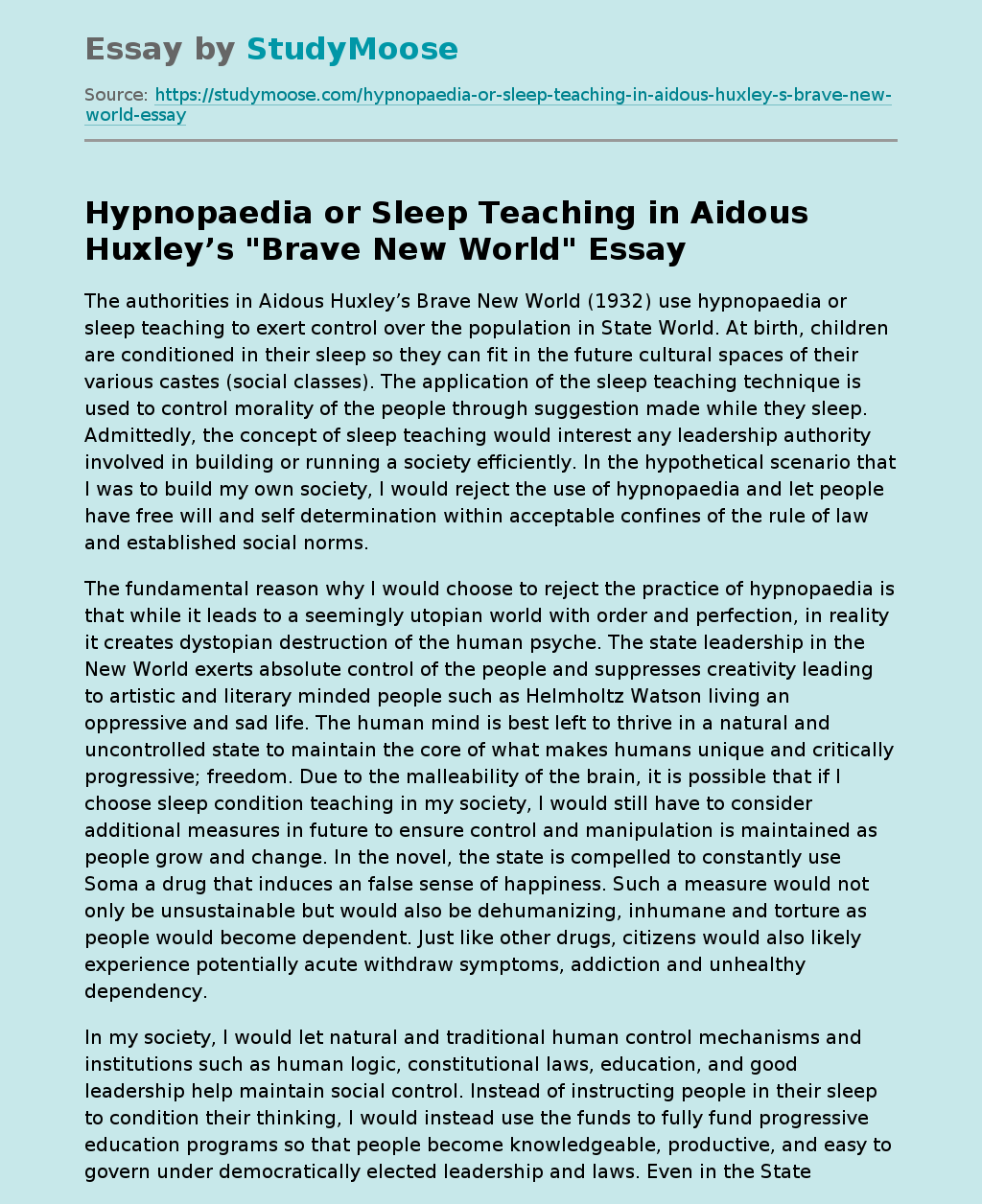