The concept of freedom is always changing and is often open to interpretation. What, exactly, is freedom? and why is it so important that we be free? In Brave New World, Aldous Huxley leaves the reader in continuous suspense over which character is truly free or has freedom. The citizens of the World State do not possess any notion of freedom, they are unable to control the way they think, feel and make decisions; however, John has the ability to do all of these things.

The World State holds the citizens captive of their most fundamental rights to freedom through Soma, the media and hypnopedia; whereas, John, free from society’s captivities, has complete control over himself and his mind. The citizens of the World State are enslaved by their ruler, they are devoid of emotions, all emotions except for that of happiness. They lack the state of consciousness needed to make their own decisions and that, in turn, creates a society that is solely governed by one process of thought.

The World State uses Soma to control the emotions of the citizens in order to create and maintain stability in the world.

This control not only takes away the pleasures of experiencing real, genuine emotions but also corrupts one’s ability to react according to how they feel in a situation. The citizens have the “freedom” to react as they please but with the constant restraints on which emotions they are allowed to feel even that freedom has been taken from them.

””Now don’t lose your temper,” she said. “Remember one cubic centimetre cures ten gloomy sentiments. ““ (Huxley p. ). Freedom is reacting based on emotions that one’s self has come up with, emotions that have been drawn from a wide spectrum, not carefully selected by one’s ruler.

The second most powerful tactic the World State uses to control their citizens is through the media along with debilitating the desire to not want to be a part of the social body. They engineer a culture that shelters citizens from what is really happening and what truly lies beneath the surface at all times. “She was appalled by the rushing emptiness of the night… “Let’s turn on the radio. Quick! “… “but I want to look at the sea in peace,” he said. “It makes me feel as though”… ”not so completely a part of something else. Not just a cell in the social body”…

But Lenina was crying. “It’s horrible, it’s horrible,” she kept repeating. “And how can you talk like that about not wanting to be a part of the social body? “(Huxley p. ). They, the citizens, are never given the opportunity to think for themselves or by themselves; thus, taking away the possibility of critical or analytical thinking. During the decanting period (birth) and even prior to that, the citizens of the World State are unable to choose their destinies, their futures are laid out before them before they are even processed as people.

Not only are they devoid of the most common emotions, they lack any individuality at all because they are created to have a certain level of intelligence, a certain status in society, they’re engineered to have certain likes and dislikes and are even under the control of society when choosing what colour to wear. “From the ranks of the crawling babies came little squeals of excitement, gurgles and twitterings of pleasure… Small hands reached out uncertainly, touched, grasped, unpetaling the transfigured roses, crumpling the illuminated pages of the books.

The Director waited until all were happily busy. Then, “Watch carefully,” he said. And, lifting his hand, he gave the signal… There was a violent explosion. Shriller and ever shriller, a siren shrieked. Alarm bells maddeningly sounded. The children started, screamed; their faces were distorted with terror. “And now… now we proceed to rub in the lesson with a mild electric shock. “… There was something desperate, almost insane, about the sharp spasmodic yelps to which they now gave utterance.

Their little bodies twitched and stiffened; their limbs moved jerkily as if to the tug of unseen wires… Offer them the flowers and the books again. “… but at the approach of the roses, at the mere sight of those gaily-coloured images of pussy and cock-a-doodle-doo and baa-baa black sheep, the infants shrank away in horror, the volume of their howling suddenly increased…. “They’ll grow up with what the psychologists used to call an ‘instinctive’ hatred of books and flowers. ” (Huxley p. ). This kind of control leads to the complete destruction of individual and collective freedom. The World State holds the citizens captive of their most fundamental rights to freedom therefore, they are not free.

Freedom is constantly questioned throughout the novel and John has the power of free will on his side because he has the capability to feel his own emotions, think critically, and act accordingly. That is something society simply will never have the opportunity or ability to experience. When he is inflicted in a situation he lacks no restrictions on his feelings, he feels love for Lenina and he feels pain for being an outcast, being different. John, who has the ability to feel everything. “”Is there any hope? ” he asked. “You mean, of her not dying? ” (He nodded. “No, of course there isn’t. When somebody’s sent here, there’s no …” Startled by the expression of distress on his pale face, she suddenly broke off. “Why, whatever is the matter? ” she asked. She was not accustomed to this kind of thing in visitors. (Not that there were many visitors anyhow: or any reason why there should be many visitors. ) “You’re not feeling ill, are you? ” …. Anger suddenly boiled up in him. Balked for the second time, the passion of his grief had found another outlet, was transformed into a passion of agonized rage. “(Huxley p. ).

In contrast with the other citizens of the World State who cannot make out the most simple of genuine emotions and one’s ability to react according to how they feel in a situation, this really puts the concept of freedom into perspective. He is not only able to feel a wide selection of emotions but because of that freedom he can think critically and make logical and rational decisions about the State’s affairs and his own life. Due to his personal freedoms he is able to see things for what they really are instead of what they are made out to be by the World State. “”We don’t,” said the Controller. “We prefer to do things comfortably. “But I don’t want comfort. I want God, I want poetry, I want real danger, I want freedom, I want goodness. I want sin. ” “In fact,” said Mustapha Mond, “you’re claiming the right to be unhappy. “

““The Savage’s face lit up with a sudden pleasure. “Have you read it too? ” he asked. I thought nobody knew about that book here, in England. ” “Almost nobody. I’m one of the very few. It’s prohibited, you see… “But why is it prohibited? ” asked the Savage… The Controller shrugged his shoulders. “Because it’s old; that’s the chief reason. We haven’t any use for old things here… we don’t want people to be attracted by old things. We want them to like the new ones. “…. “But the new ones are so stupid and horrible. Those plays, where there’s nothing but helicopters flying about and you feel the people kissing. “

He made a grimace. “Goats and monkeys! Only in Othello’s word could he find an adequate vehicle for his contempt and hatred. ” (Huxley p. ). The natural demonstration of this attribute reflects how thoughtless his free will is, strongly contrasting the captivity those of the World State are under. Others that are led by the rules of the World State are merely human-looking machines that carry out meaningless lives to keep the rulers happy and society stable.. John has presented a state of being that the rulers of the World State have tried to exterminate- free will. He is who he wants to be and has pushed away the man society has created. And that, is freedom. 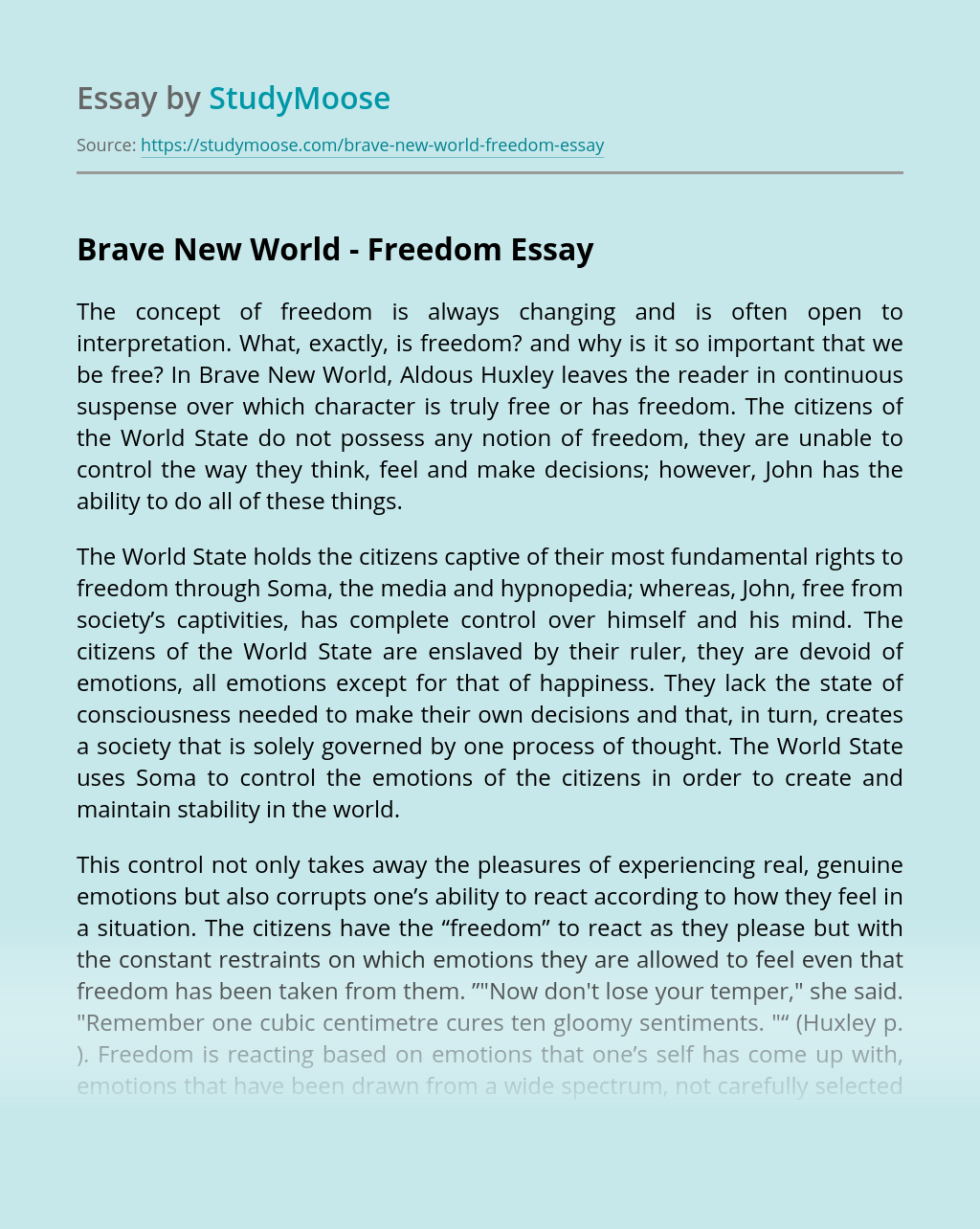 There are many things that people pursue, such as wealth, prestige, or the latest technology. Of our many pursuits, the most essential are happiness and freedom. However, a question arises: can we possess both happiness and freedom? Most people may not have a clear answer for that. Brave New World, through the actions of its...

First of all, it is believed that one must suffer unhappiness to truly know and appreciate happiness. However, that concept is incompatible with a utopia, as the point of a utopia is to be without sadness, pain and suffering. In that respect, the World State is a utopia. Secondly, the concept of knowing unhappiness to...

In Brave New World, Aldous Huxley depicts how people sacrifice their relationships, specifically family, in order to having the feeling of happiness. The people only have a temporary, self-centered, kind of happiness instead of true joy or strong emotions. They do not realize how much they are missing out, because they have never been around...

As humans we tend to get a feeling called love for somebody in our lives. Love is an emotion that deeply alters a person’s mind. This emotion can bring out the best of people or can make them question who they are. Sometimes when people are living a rough life they often do not have...

In the play Othello, our first impression suggests that Iago and Othello are portrayed as having somewhat opposite qualities. Iago is first shown to be false and pretentious. Even though he says “I will wear my heart upon my sleeve”, giving the impression that he shows all his emotions willingly, he is then shown to...

Society can be represented by an onion. There are many layers to both. In society, the center is an individual. It then moves on to family, community, nation, and finally, humankind. Each layer cannot exist without the layers underneath it, just like how an onion cannot be an onion without its many supporting layers. A...

The novel Brave New World has often been characterized as dystopia rather than utopia. Nevertheless, the superficial overview of the novel implies a utopian society, especially if judging by what the Controller said to John, the Savage: People are happy; they get what they want, and they never want what they can’t get. They’re well...